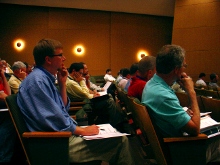 On the last two days of the historic Diaconal Summit of the Orthodox Presbyterian Church, the main speaker, Dr. Brian Fikkert, moved from the first day's philosophical look at the poor to consider more specifically how to help the poor without hurting them or yourself. The three-day conference, held June 3 through 5 at Wheaton College in Wheaton, Illinois, was the first time deacons from throughout the church gathered to consider their calling and effective ways to serve the needs of the local church, their community, and the world. If you have not done so, you may want to read Part 1 of this article first. A photo album is available with pictures sent in from several different sources, including DART Photography.

Fikkert reminded the 220 deacons and some elders and ministers that poverty is rooted in broken relationships with God, ourselves, others, and creation. To alleviate poverty is more than building someone a house in a poor country or paying for their groceries, said Fikkert, an associate professor of economics and the executive director of the Chalmers Center for Economic Development at Covenant College in Lookout Mountain, Georgia. Poverty alleviation, he emphasized, is a process to reconcile those broken relationships.

Repentance from the way we view poverty is the first step to alleviate poverty, said Fikkert. The natural assumption, he said, is to think that because someone is more prosperous, they are more sanctified. He told of his experience of going into a Kenyan slum and being surprised by the trust the poor believers demonstrated as some prayed, "My husband beats me every day. Please protect me."

"People living on less than a dollar a day would know Abba Father in an intimate way that I don't know him yet," said Fikkert. "As I walked away I realized I believed in the prosperity gospel. I believed that since I have the stuff I must be the most sanctified."

Fikkert emphasized that "the verbal proclamation of the gospel in its fullest sense is central to poverty alleviation." Many evangelicals are enticed by the post-modern view that what is true for them is not necessarily true for another so they often don't share the gospel along with diaconal help. However, without sharing the gospel, the recipients may attribute gifts of food or money as coming from some other source than Christ. "We're communicating the gospel in words and deeds."

Fikkert urged working with the indigenous church and supporting indigenous pastors overseas where appropriate and to develop relationships with the materially needy rather than just handing them money or food. He talked about focusing on relationships with people and the process of helping those in need as opposed to the mindset of just completing projects, such as donating a tractor. He encouraged consulting with the needy to find out what help they want and how they want it done, compared with simply going into an area and imposing on the people a plan to meet their needs. He frowned on building a house while leaving the poor watching and not getting them involved in the process.

One of the first things deacons should do when asked for help is to determine what level of need the person has, Fikkert said. For example, if the person is in crisis and can’t help himself, such as immediately after the earthquake in Haiti, the situation calls for "relief." Fikkert rarely sees crisis situations in the USA, but when someone needs relief, it should be for only a short time.

Once the crisis is over, the situation, such as currently in Haiti, calls for a different response. Fikkert calls this the "rehabilitation" stage, when the victims are capable of participating in their own recovery. The idea is to restore the person or community to their pre-crisis state. The situation is shifted from doing something for the person to doing something needed with the person, such as providing cash for work programs where the needy get cash or food in exchange for work. Instead of building homes for the Haitians, Fikkert suggests building homes with the Haitians' help.

The third level of aid, Fikkert said, is the hardest to give and the situation most needy people in the US are in. He calls it "development," which is the process of helping the person move from where the needy person is restored to their pre-crisis condition to where the deacons help to improve the person’s relationship with God, themselves, others, and creation. It involves the deacon and the needy walking together over time.

During the development stage, the deacons should find out about the gifts and capabilities of the needy person and focus on using those abilities to help improve their situation. As an example, Fikkert suggested having the homeless person help to prepare, serve, and clean up after a meal at a homeless shelter rather than simply serving food to them. That helps to avoid paternalism and keeps the church from providing things that the person can do for themselves, said Fikkert. It also keeps the church from treating the needy as losers who need the deacons to fix them.

After the initial crisis has passed, Fikkert urged the deacons to develop a deeper relationship with the needy as they seek to rehabilitate the person. Fikkert said the deacons should consider how to help the poor by looking at their assets—the capabilities, skills, and resources of the person and their community—to see where they can help themselves to make a viable living. "We tend to bring in resources too soon and too often," said Fikkert.

He discourages coming with a prepackaged solution that would be imposed on the needy. Instead he wants people to participate in their own recovery by trying to include the needy in the process of trying to solve their problems, from the planning stage, to the execution of the plan, and finally to evaluate how well things worked.

Fikkert shifted from the philosophical to the practical when he spoke of how to deal with the person off the street who probably doesn't need immediate relief. He suggests asking the person where they want to be in a few months, then helping them set goals to accomplish that. He stresses finding out what strengths and abilities the person and their family have to accomplish those changes. Then he recommends asking the needy how the deacons can support them in reaching their goals. He also urges follow up to see how things are going.

Fikkert spoke about the pluses and minuses of short-term missions, encouraging pre- and post-trip training and urging that the participant go as a learner and not a doer who thinks they are saving the needy. Instead the short-termers should sit at the feet of mothers in slums and ask them what God is doing in their lives, rather than offering a flashy VBS program that may make the recipients no longer want to attend their ordinary, less flashy instruction.

Much of what Fikkert spoke about is elaborated in the first seven chapters of the book he co-wrote with Steve Corbett, When Helping Hurts: How to Alleviate Poverty Without Hurting the Poor ... and Yourself.

To flesh out many of Fikkert's principles, OPC missionary deacon Robert Wright spoke of how the OP mission in Uganda shows diaconal help to the Karimojong warrior tribe. Discussions about the benefits and problems of short-term missions between Fikkert and Wright will be part of an in-depth report on the Diaconal Summit, scheduled to be appear in the September issue of New Horizons. The gist of three interactive workshops, led by Committee for Diaconal Ministries members Ronald Pearce, John Belden, and David Haney, also will be presented.