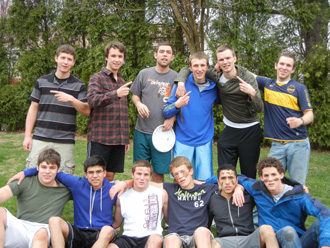 The 2012 OPC Timothy Conference: Seeking God’s Call for Your Life, One Step at a Time

Attending the 2012 Timothy Conference may be one of the most important steps fifteen young men in the Orthodox Presbyterian Church may take this upcoming March. The conference seeks to challenge men ages 16 through 21 to consider whether the Lord may be calling them to the gospel ministry. Sessions need to nominate the young men to attend the all-expense-paid conference, held March 28-31 in Escondido, California, by the January 15 deadline.

Joshua Bernhardt from New Hope OPC in Green Bay, Wisconsin, recalled the importance of the conference after he attended in 2011. A high school senior at the time, Joshua wasn't sure he was called to be a minister, but he was glad he went. "I have learned much at the Timothy Conference that will help me search for God's will, and I am thankful for this opportunity."

At each Timothy Conference, sponsored by the Committee on Christian Education's Subcommittee on Ministerial Training, five OPC ministers speak on different aspects of the ministry and the men sit in on classes at the nearby seminary. The 2012 slate of speakers include Zach Keele, pastor of Escondido OPC, Escondido, California; Michael Babcock, pastor of Calvin OPC, Phoenix, Arizona; David VanDrunen, OP minister and Westminster Seminary California professor; David Crum, regional home missionary for the Presbytery of Southern California; and Danny Olinger, CCE general secretary. The men also will observe classes at Westminster Seminary California to get an idea of what seminary is like.

Bernhardt appreciated the wisdom of the speakers and the camaraderie of like-minded young men. "I have been privileged to meet so many great and influential people in the OPC, also fellow brothers in Christ who are my age and have many of the same questions I do," said Bernhardt. "I have learned much in the last few days about the ministry and what goes into becoming a pastor and how to know if I’m called to that."

When Bernhardt returned home to Green Bay, he brought with him "an abundance of things to think, ponder, and pray about. I will be looking at my church and pastor in a different way, pondering if I think I could be a shepherd to a flock. This has also refueled my fire to stay in the Word of God and draw close to the church."

"I am not totally sure what God’s calling for my life is yet," adds Bernhardt, "but I am praying and know that he will show me in his time—one step at a time."

Godly young men in your congregation will also benefit from taking this significant step toward considering God's calling. Sessions should discuss their nomination with the young man and get his assent to attend the conference. Travel costs, meals and lodging will be provided by the Committee on Christian Education. The student should express his willingness to participate even though it may interrupt his class schedule. The men will fly to San Diego, arriving on Wednesday night, March 28, and fly home on Saturday morning, March 31.

Sessions may find the application on the Timothy Conference page. The applications must be e-mailed to Danny Olinger at Olinger.1@opc.org by the deadline.

The next important steps on behalf of these young men are in the hands of their sessions and the SMT. Applications must be received by January 15, 2012. The SMT promises to review the applications and notify the sessions of their decision by January 21, 2012.