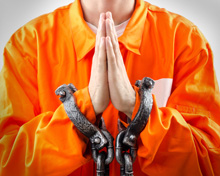 I am new to the Reformed faith. Since my conversion, I have noticed a great need that I believe is not being adequately met by the Reformed circle of believers (at least here in Oklahoma). Being a new believer, I asked a friend who is not, "Why are the prisoners left untouched?" (That is, why is there minimal, if any, involvement in the lives of incarcerated or released persons by Reformed churches?) This guy has been a Reformed Christian for twenty-five years. I thought he would know. His answers, though plausible, left me asking myself the same question. At length, I came up with some answers.

To start with, the prisons are full of people who have committed heinous crimes. Murderers, rapists, child molesters, and even bogus check writers fill the state prisons. You know what they are like. You watch the news. It's best they are left alone.

Prisoners also have a reputation for "mistaking kindness for weakness." They are habitual users of people. Their sins are so shameful, they would probably rather not discuss them. We know that prison is God's righteous and holy judgment for their sins. They have no one to blame but themselves.

If all that is not enough to convince you that we shouldn't become involved in prison ministry, the prisons are full of those who have accepted mere "jailhouse religion." This is, no doubt, the result of so many pulpits being filled by unlearned, misguided preachers spouting "easy believism." For those few to whom God has seen fit to grant his effectual grace, understanding of the mystery, and repentance, this is their time of penance. They need time to be alone with God.

One reason prisoners are left untouched, might be found on the home front. Are we depending on the sovereignty of God, while ignoring our responsibility? If you say, "God is sovereign," I agree. He has declared the end, but many are neglecting the means (Rom. 10:14–17; 1 Cor. 1:18, 22–25). What do those who are Reformed, incarcerated, and unashamed of the gospel, answer to those who ask, "If your church is so good, why don't they teach here?"

Where, in the Prisons, Are the Reformed Churches?

J. I. Packer wrote in his Knowing God that, with complete foreknowledge of our most grievous sins, God set his love on us. So reads the Scripture (Rom. 5:8)! Believing prisoners may be guilty, but they are no longer condemned (Rom. 8:1). The apostle Paul wrote of some pretty awful sinners, when he wrote, "And such were some of you" (1 Cor. 6:11 nkjv)! That must be infinitely reassuring to the prisoner! Paul wrote further of ministers and why they are here, too (Eph. 4:11–13). Jesus, in fact, spoke of people who will visit those in prison (Matt. 25:31–46). (I don't recall him limiting visitation only to the innocent.) So ...

Why are the prisoners left untouched?

There is a need, not being met, for Presbyterian and Reformed churches to become active in prison ministry. "In what ways," you ask, "may we become involved?" Basically, by ensuring that inmates receive the same ministry that church members who are not incarcerated expect.

This, then, is a call to all Reformed church leaders, future leaders, and members! If your church is not currently involved in prison ministry, please begin this effort, of which Jesus spoke, today! Did I hear someone ask, "How?" Call the nearest prison (if you don't know of one, call and ask your state's Department of Corrections) and ask to speak to the chaplain (or, if they don't have one, to the religious volunteers coordinator). You will have to be cleared through the National Crime Information Center (states vary as to whether or not, or for how long, felony convictions will bar one from visiting their institutions). Then attend an orientation meeting at the facility, and you are in! It's incredibly simple, though tedious.

By the way, I am a Reformed Christian, serving a ten-year sentence. The ideas for this article came from my own life. Like you, I am a sinner saved by grace. Possibly not like you, however, I have committed sins so shameful that I would rather not speak about them (Eph. 5:12–13).

My incarceration is God's righteous and holy judgment for my sins (Rom. 13:4). I do realize that God has a different system of justice described in Scripture for one such as myself. Prison is the means he chose to bring me to repentance; however, so for it, and to him, I am eternally grateful (Ps. 107:10–20). There is no one to blame but myself. I am, however, tired of being alone and unwelcome because of my past sin from which the Lord has delivered me.

First Corinthians 6:11 is a tremendous source of assurance to me! Based on that assurance, I am unashamed of the gospel. So, what do I answer, when someone asks, "If your church is so good, why don't they teach here?"

Prison staff and their inmates need you! Do become involved, won't you? Then, I, others like me, and those who are searching for the truth, can stop calling themselves "the Untouchables." You can make us "the Touchables"! May God bless you!

Editor's note (added in 1998): The above article was published in the March 1996 issue of New Horizons; we recently received this update from Mr. Fozard:

In December 1992, I was sentenced to ten years in prison in the Oklahoma Department of Corrections, for a sin which I had practiced since I was ten years old.

In August 1993, I received some Reformed literature. On August 23, 1993, after reading that literature, I became a Christian. For the next year, I immersed myself in Reformed church history and doctrine, but I felt all alone in my theology in prison. I felt a bit "untouchable."

Then I met former OP pastor Roy Kerns. Over time, he began introducing me to the Reformed world-and-life view. "Roy," I finally asked, "who teaches this stuff?" His answer: the Orthodox Presbyterian Church.

The next week I called Pastor Richard Shaw of Westminster OPC in Bartlesville, Oklahoma. He began driving over two hundred miles to visit me in prison. That was in the summer of 1996. On December 5, 1997, I was released from prison (on probation).

I moved to Stillwater with the intention of attending college, and with Pastor Shaw's recommendation, I was well received by Pastor Bruce Parnell of the RPCNA. Through this little church I was loaned nearly $5,000 to help me get established and make restitution in outstanding cases which threatened to return me to prison. In March 1997, I was received into the RPCNA as a communicant member and participated in my first communion service.

I was concerned that the state would require me to receive secular counseling, but my probation officer said biblical counseling with my pastor would be fine.

In the fall of 1997, I enrolled at Oklahoma State University, and received a full-tuition scholarship.

I have stumbled with great consistency, but God has used me to minister to those in our county jail and on campus.

I found a job in telemarketing (as I had, on and off, for ten years), but I got tired of that kind of work and found a new job preparing the salad bar on the OSU campus. The pay is about the same, there is no transportation problem, and I get a free lunch. For that I thank God!

What about the future? Well, for now, I am a public relations major. I hope one day to study counseling at Westminster Theological Seminary in Philadelphia, if the Lord wills.

I want to thank each of you for your prayers and support. Please pray that God will allow me to discipline my life for his glory, and that I may learn to be content no matter what state I am in.

Mr. Fozard now resides in Fort Worth, Texas where he serves as the president of Hope Prison Ministries