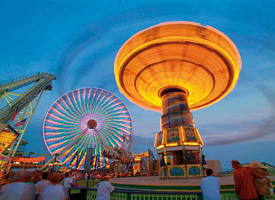 No Boredom Witnessing on the Boardwalk

The Bible tells us that "Eye has not seen, nor ear heard, nor have entered into the heart of man the things which God has prepared for those who love him" (1 Cor. 2:9). Our God is a God of the unexpected. He is able and willing to do infinitely more than we can ever ask or hope.

My wife and I had not expected to spend the summer in Wildwood, New Jersey, at the Boardwalk Chapel. Neither of us had ever been to the Chapel or served on the Chapel staff, and what little I knew came from a book I’d read in my Presbyterian history class.  We had other plans for the summer, but God had one that was better than anything we could have imagined. Our work at the Chapel has given us a deeper appreciation for missions and evangelism. For me, talking to so many people from so many different religions and walks of life has been a reminder of God's mercy in bringing me out of the prison of sin and misery and into the glorious light of the knowledge of Jesus Christ. My wife has felt a renewed appreciation for God's grace in preserving her faith through the blessing of growing up in a covenant home. 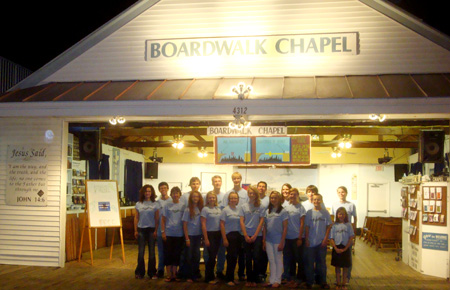 When we go out at night to evangelize on the boardwalk, we often talk to people about the reality of death. The book of Hebrews says that it is appointed for men to die once, and afterwards the judgment (Heb. 9:27). Our own Chapel staff had a sober reminder of how suddenly death can come when early in the summer four of the girls were involved in a car accident. Although none were visibly injured, they were taken to the hospital as a precaution. God graciously spared their lives and used the experience for his own glory, uniting the hearts of the staff and giving us all a sense of the urgency of calling dead sinners to repentance and life in Christ.

We’ve rejoiced to see many in the Chapel and out on the Boardwalk profess their desire to repent of their sin and place their faith in Christ, trusting in him, the One who paid the debt for their transgressions against a holy God. During one of our many memorable conversations we spoke with two teenage boys. Neither of them came from a Christian home. They'd been to church only for weddings and funerals. They knew almost nothing of Jesus or the Bible. But when I asked if they, having never opened a Bible, could tell me some things God would call wrong, they didn't hesitate. They knew that murder, lying and stealing were wrong. From there, we were able to show them the seriousness of sin and how the penalty for sin is death. After sharing the Gospel with them and explaining what true repentance is, both boys professed faith in Christ and prayed with us. After learning we'd kept them out past their curfew, we quickly gave each one a Gospel of John and sent them on their way!

On many occasions we pray that the seed planted will bear fruit. One evening two staff members brought into the Chapel a man we'll call "Mike." Mike confessed that he was addicted to drugs and that he usually stole things to get money to buy more drugs. We talked about how drug addiction is like being in prison and how sin has a greater power than drugs over his mind and will. He took a pamphlet on drug addiction and promised to read it. A few nights later, Mike came back to the Chapel in a much better state of mind and spoke with Jon Stevenson, the director, who found him very responsive to the Gospel message but not yet ready to act on what he professed to be true.

We've been reminded in many ways that God alone is the One doing this work. One night, one of our Gospel tracts, found lying on the boardwalk, became the means of directing two people to the Chapel who asked Jon to explain what they'd just read. On another occasion, while in the midst of talking to a group of Roman Catholic young people, a Jewish man from Israel came up—tapping us on the shoulder, so to speak—and asked if we believed Jesus to be Jewish. When we told him we did, he then asked why we don't believe in the Jewish religion like Jesus did. He agreed to wait for an answer until we finished talking to the others. Then, as we finished our first conversation, four Muslims from Albania approached, wanting to talk about Jesus. It seemed as if God was bringing the nations to us to ask, "What must we do to be saved?" We rejoiced that night in God’s sovereignty, praising him for being a God of unexpected grace. 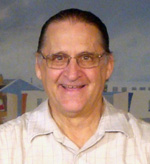 For most of us on the Chapel staff this was our first summer serving at the Boardwalk Chapel. We didn't know each other when we came. We didn't know what to expect. We had almost no experience in evangelism. Some of the staff members were away from home for the first time in their lives. But the Lord has used the Chapel to teach us to expect great things from him. One Chapel staff member has witnessed the conversion of a family member on the other side of the country, through long late night internet calls about the meaning of true repentance. The Lord is using the Boardwalk Chapel to change sinful hearts and lives. We give thanks to God for sustaining this work of the Orthodox Presbyterian Church through its 68th year and for calling us to serve him in such a unique and unexpected place!

By summer’s end four summer assistants and eleven volunteer staff members will have faithfully served in the twelve week evangelism ministry of the Boardwalk Chapel. They were sent by various OPC and other reformed congregations from the states of Illinois, Maine, North Carolina, New Jersey, Pennsylvania, South Carolina and Washington. 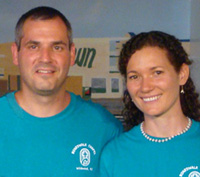 From Memorial Day to Labor day 85 evening services will have been conducted of which fifteen were Sunday evening worship services conducted jointly by two local OPC congregations.

The eleven mission teams who participated during the fourteen week season totaled over 150 participants including fifteen ministers and licentiates who filled the Chapel pulpit for 79 consecutive evenings.

Boardwalk evangelism teams logged discussions with at least 300 persons on the boards during the evening hours with an estimated 800+ contacts within the Chapel throughout the day and night-time hours (9:00 a.m. to midnight).