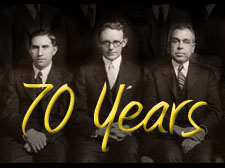 Seventy years ago, when the Orthodox Presbyterian Church was formed on June 11, 1936, J. Gresham Machen rejoiced: "We became members, at last, of a true Presbyterian Church." The long battle with modernism in the Presbyterian Church in the USA ended with the formation of a new church that was committed to maintaining what the PCUSA abandoned. It would be the spiritual successor to the PCUSA, and it would continue in the American Presbyterian tradition.

For the Orthodox Presbyterian Church, conflict over that question arose as soon as the new church was constituted. In debates that ranged from premillennial dispensationalism to parachurch missions work to the use of alcoholic beverages, opposing voices in the church made frequent appeals to "historic American Presbyterianism."

Over forty years ago, George Marsden, then a senior at Westminster Seminary, explored that debate in a series of articles he wrote for the Presbyterian Guardian, "Perspective on the Division of 1937." Marsden's account has become a standard interpretation of that early episode in the history of the denomination, and it has shaped much of the church's subsequent understanding of its struggles for identity as it sought faithfully to proclaim the Reformed faith in its American context.

In observance of two milestones-the seventieth anniversary of the OPC and the 300th anniversary of American Presbyterianism-the Committee for the Historian of the OPC is sponsoring a seminar at 2-4 p.m. on Wednesday June 21, at Trinity Christian College, in Palos Heights, Illinois (preceding the General Assembly that convenes at 7 p.m that evening). Our special guest will be Dr. George Marsden, professor of history at the University of Notre Dame, who will reexamine his 1964 article. Joining him will be three additional speakers: Dr. D. G. Hart, Rev. Alan D. Strange, and Dr. Peter J. Wallace.

Members and friends of the OPC are welcome to join early-arriving General Assembly commissioners at this free seminar. If you are planning to attend, please find time to read (or re-read) Professor Marsden's article, "Perspective on the Division of 1937." Originally appearing in the Presbyterian Guardian in 1964, it was reprinted in the anthology, Pressing Toward the Mark: Essays Commemorating Fifty Years of the Orthodox Presbyterian Church (ed. Charles G. Dennison; Philadelphia: Committee for the Historian of the OPC, 1986).