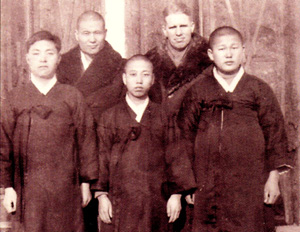 Korean Christmases I Have Known

My first Christmas in Korea was spent in Pyongyang, in what is now North Korea. It was in 1903, then the days of the old Korean king, seven years before Japan annexed the country. I don't remember anything about it, though I must have spent most of the day in the arms of my mother [being six months old—Ed.], who had only one more Christmas on this earth and now lies in a cemetery near the city of my birth, in North Korea.

"Korean Christmases" calls up many memories. There was one when my fundamentalist father sent me out to the country with a Korean laborer to cut down and bring back some mistletoe, so that we children might taste a bit of our motherland culture, some of which had pagan roots, for Father enjoyed catching someone under the mistletoe.

There was the time when we made colored paper chains to decorate the crooked Korean pine, cut from a nearby hillside. There were the days we spent shelling the sharp—pointed popcorn that Father had so painstakingly and thoughtfully raised the preceding summer just for this occasion, and the hours spent popping it, and then the fun of making it into generous popcorn balls, a ceremony at which Father always officiated.

Then there were the big "pagoonies" (split—wood baskets) that had been carefully filled with goodies, plus one special gift for each person, which had been specially ordered all the way from America. Those were the days when missionaries almost lived out of the Montgomery Ward catalogue or the Amocat catalogue (except for what they could raise in their gardens). There was also a basket for each of our servants' families (and we had several, in those days of cheap labor). We children had to carry them through dark alleys before daylight, to the straw-thatched cottages where those who are now euphemistically called "the help" lived.

This had to be done before we could go into the room which had been kept locked until Christmas, to "oh" and "ah" over the Christmas tree with live candles burning on the many branches. There were chairs set out for each of us, and across the back of each chair (instead of along a fireplace mantel) hung a pair of huge black stockings, the kind we used to wear in those days. The stockings bulged with nuts and fruit and small gifts, while the larger presents were piled on each one's chair seat.

Then there were the churches crowded for the Christmas service that we always attended. They were decorated with "Man-guk kees," "the 10,000 nations' flags." Dr. W. L. Swallen [a Presbyterian missionary, who was instrumental in getting Mr. Hunt's father-in-law, William N. Blair, to become a missionary to Korea—Ed.] used to say, with what proved to be prophetic foresight, that if they continued using such flags to decorate the churches, the time would come when they would have to worship flags in their churches. (This time came shortly before World War II.)

There were the churches packed to overflowing for the annual Christmas program, with their theatrics which must have been much like the miracle plays that used to be given in Europe, long ago. I remember Mr. Will Kerr, at that time my youthful bachelor missionary hero, sitting on the platform as Herod, dressed up in Korean ceremonial robes, including a "chang ja kwan" (the headpiece used by scholars and others at weddings).

But the first things that came to mind when the request came for this article were two incidents on Christmas Eve in Pusan, in 1946.

Following the end of World War II, only men missionaries had been allowed by the American military government to return to Korea, up to this time. I was billeted with U.S. Army officers in a former Japanese home and was taking my meals with the officers and a small group of enlisted men, who ate in a mess hall set up on the ground floor of the provincial capitol building. We missionaries had been allowed APO (Army Post Office) privileges, and already a trickle of packages was beginning to flow from friends in America who had heard of the starvation and malnutrition of orphans in the one or two orphanages which had been set up by Christian people who had themselves been recently suffering in prison for their faith, under the Japanese.

The APO room was just a little space partitioned off at one end of a Quonset hut, and it was full of packages from home for the boys' Christmas. The mail clerk, who normally didn't have much to do, was working frantically to keep up with this, for him, unusual flow of business, when something happened to one of the parcels addressed to me. It contained Karo syrup to be used in making up babies' milk formulas. Several of the cans broke, spreading the sticky syrup over the floor and packages. It was certainly enough to try anyone's patience, but the GI took it in stride without a murmur. After all, it was for some poor postwar starving youngsters. For him, it may not have been the merriest Christmas, but it has always remained in my memory as an outstanding example of the true Christmas, or I prefer to say, the Christian, spirit.

That same year, I had agreed with some of the Christian GIs that we should try to overcome our loneliness on Christmas Eve by getting together for a carol sing. But before I could meet with them, there were some parcels of relief clothing that I wanted to take to some lepers who were living under the drawbridge leading to Young-do Island. (The prewar leper colonies had not been reorganized.) It was already dark when I got to the little group of lepers, huddled on a part of the cold cement foundations of the bridge, at the very edge of the water, protected above by the high bridge and beneath by a few mats. They had tried to shield themselves from the cutting wind by some mats suspended as windbreaks.

When I told them that I had some bundles of clothing that I must drop and run, they said, "Oh, but tomorrow is the Savior's birthday. You must stay and have a service with us before you go."

They didn't even seem to be interested in the packages that I had brought—but piled them up and placed on top of them a little carbide lamp, made of a couple of cast-off Army beer cans. I had not come prepared for a service, but a Bible and a hymnbook were produced, and, for a time, I had to forget about the carol sing with the GIs.

With them holding the light for me, when I needed it, and one of the deacons to lead in prayer, the service got under way. It was, perhaps, the most impressive Christmas service I have ever had part in, and it helped me again to be aware of the true meaning of Christmas. "The people who sat in darkness" had indeed "seen a great light; they that dwelt in the land of the shadow of death, upon them had the light shined."