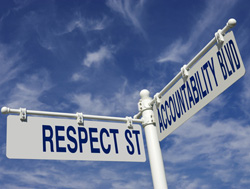 It’s been a few years, but the dreadful scandals involving certain televangelists still hamper the witness even of faithful churches. Such scandals could be avoided if Christians paid better attention to God’s instructions regarding elders in 1 Timothy 5:17–25. In a nutshell, he tells us to seek the Lord and practice presbyterianism.

But where does this passage mention presbyterianism? Everywhere! The Greek word translated “elder” gives us the synonym presbyter. And from that word we get presbyterianism—a term that refers to church government by elders.

In this passage the apostle Paul gives us three ways to seek the Lord and practice presbyterianism. Let’s consider them.

First, we are instructed to respect our elders in a Christ-centered way: “The elders who direct the affairs of the church well are worthy of double honor, especially those whose work is preaching and teaching” (v. 17). Above all, this means that we should honor them as Christ’s official representatives. Christ alone is the Head of the Church, but he rules it by his Word and Spirit through his office-bearers. Therefore, he delegates some of his own authority to the elders. They function as Christ’s official representatives to the Church, clothed in Christ’s authority. It’s for Christ’s sake, then, that we’re to respect our elders’ authority (see also 1 Thess. 5:12, 13; Heb. 13:17).

But there’s a flip side. One way that we honor Christ’s representatives is by steadfastly refusing to recognize as office-bearers those who are not lawfully ordained and installed. There’s no shortage of self-ordained “ministers” on radio and TV and throughout our communities. But if they don’t have a lawful calling, then it’s our duty under Christ not to honor them as ministers. Verse 18 expands on the “honor” that’s due to those who are lawfully ordained and installed: “For the Scripture says, ‘Do not muzzle the ox while it is treading out the grain,’ and ‘The worker deserves his wages.’ ”

Clearly this means that congregations should pay their pastors (see also 1 Cor. 9:14). But notice: verse 17 also mentions ruling elders. You see, it’s right for us to recognize extra involvement. For example, if a ruling elder sacrifices vacation time to go to presbytery or general assembly, wouldn’t it be good to honor him financially? God calls upon us to respect our elders in a Christ-centered way.

Second, Paul instructs us to correct our elders in a Christ-centered way. This is especially a role of the session. It includes protecting elders from sinful accusations: “Do not entertain an accusation against an elder unless it is brought by two or three witnesses” (v. 19). The Bible insists that a church court may not convict anyone except on the testimony of two or three witnesses. But in the case of elders, the church isn’t even to receive accusations without that many witnesses!

Why should there be such special treatment? Because God knows that Satan works overtime to stir up trouble. He aims to alienate people from their spiritual leaders. John Calvin’s comments on this verse are still pertinent:

It is necessary to guard against the malice of men in this way. For none are more exposed to slanders and insults than godly teachers. This comes not only from the difficulty of their duties, which are so great that sometimes they sink under them, or stagger and halt or take a false step, so that wicked men find many occasions of finding fault with them; but added to that, even when they do all their duties correctly and commit not even the smallest error, they never avoid a thousand criticisms. It is indeed a trick of Satan to estrange men from their ministers so as gradually to bring their teaching into contempt. In this way not only is wrong done to innocent people whose reputation is undeservedly injured, but the authority of God’s holy teaching is diminished. And it is this that ... Satan is chiefly concerned to achieve ....

At the same time, the session must protect the church from sinful elders. Verse 20, still speaking of elders, says, “Those who sin are to be rebuked publicly, so that the others may take warning.” Elders, then, are to get special treatment not only when they are accused. Because they are responsible to represent Jesus Christ in a special way, they are to be judged all the more severely if they are found guilty.

In all these cases, however, we should not take sides automatically: “I charge you, in the sight of God and Christ Jesus and the elect angels, to keep these instructions without partiality, and to do nothing out of favoritism” (v. 21). It’s human nature to prejudge a case (“I like that guy, so he must be right,” or “That guy rubs me the wrong way, so he must be wrong”). But by God’s grace—no matter who is involved or how we feel—we are to seek Christ’s side! Seek the Lord and practice presbyterianism.

Even so, our Lord warns us not to expect a perfect church in this life. Verse 24 says, “The sins of some men are obvious, reaching the place of judgment ahead of them; the sins of others trail behind them.” As long as we are on this side of glory, there will be sinners in the church—and that includes you and me—and, unhappily, there will be hypocrites.

Knowing this doesn’t mean that we should try to read hearts! A pastor once proved that he did not do something he had been accused of. His accuser quickly retorted, “Well, you thought it!” God condemns such presumption. “Man looks at the outward appearance, but the LORD looks at the heart” (1 Sam. 16:7). Don’t pretend to read thoughts and motives. Only God can do that. To try, then, is to play God, and that’s a serious sin!

Third, God calls upon us to select our elders in a Christ-centered way. We should be diligent to seek and train men for office. But we should never be overly eager to ordain and install them: “Do not be hasty in the laying on of hands, and do not share in the sins of others. Keep yourselves pure” (v. 22). We can create a lot of trouble by failing to “wait on the Lord” in this matter!

Still, don’t despair of finding qualified officers. The Lord knows how discouraged we can get! So he reassures us, “In the same way, good deeds are obvious, and even those that are not cannot be hidden” (v. 25). Keep seeking and training gifted men. And above all, seek the Lord! Sooner or later, he’ll bring to the surface the gifts and graces of his men for the task. So don’t become weary in well doing. Seek the Lord and practice presbyterianism!

Why do you think verse 23 (“use a little wine because of your stomach”) is there? Some seem to think it’s there so alcohol-sipping Christians can poke fun at teetotalers. But why is wine mentioned in this context? I think the reason is that diligent Christ-centered church leadership involves stress. God inspired the apostle Paul’s expression of concern for Timothy’s stomach problems. In this way, God encourages us to be sensitive to the fact that faithful pastors and elders face tremendous pressures.

Christians sometimes fail to obey God’s instructions regarding the selection and treatment of elders. This sets the scene for grievous scandals. We can avoid many of these problems if we faithfully follow our Lord. Trust and obey! Keep seeking the Lord and keep practicing presbyterianism.