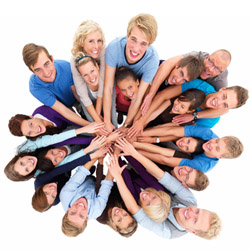 “Be completely humble and gentle; be patient, bearing with one another in love. Make every effort to keep the unity of the Spirit through the bond of peace” (Eph. 4:2–3).

The unity of which the apostle speaks is a unity which is, first of all, given. We do not create it. When God looks at his people (those who are alive today, those who have gone before, and those who have yet to be brought into his family) he sees one church. That is not a situation we have brought about. It is the Triune God who is the source of that body’s oneness.

Paul talks about the role of each of the persons of the Trinity in verses four through six. There is one Holy Spirit by whom the individual members are being built into the one body. There is one Lord Jesus Christ, who died for his church, and in whom each and every true member of the church rests his faith and into whom they have been baptized. There is one God and Father. If you belong to Jesus Christ, then you have the same Father as every other believer. There is one body because there is one Lord and Savior, one Holy Spirit, and one God and Father over all, through all and in all. But if we are one body by virtue of the work of the sovereign God, then how can Paul say that we have to keep the unity of the body? It would seem that this unity should be indissoluble.

Indeed it is indissoluble. That unity is given by God and it is maintained by God. We didn’t create the unity and we can’t keep it. But there is something we can and must keep. Do you remember Christ’s high priestly prayer in John 17? He prayed to the Father that his followers may be one. Why? So that the world might believe that the Father had sent him. What Jesus was praying for was a visible unity, a unity that the world could see. The world can’t see the spiritual unity that exists between believers, but it can see outward expressions of that unity. And it is those outward, visible expressions we are called upon to maintain.

Too often the church has contented itself with the existing situation because we have said, “Oh, all those passages that talk about our oneness in Christ are talking about the invisible church. As far as the visible church is concerned, we just have to live with that situation until Christ comes back again.” But there are not two churches. There is one church of Christ. It has an invisible aspect; it has a visible aspect. But it is one church. What Paul is calling upon the people of Christ to do (Eph. 4) is to render more visible that oneness which Christ has established between all those who are truly Christians.

Now that can’t be done by ignoring the truths that God has revealed in his Word. Sometimes when people have understood the need to give visible manifestation to the oneness we have in Christ, they have proceeded to run roughshod over the doctrines of Scripture and to act as if all that is needed is to give the world a model of organizational unity. Such unity would be a sham if it were not based on a common understanding of and commitment to God’s Word. Where we need to begin with our brothers and sisters in Christ is by studying the Bible together—not to prove our points, but to seek a clearer understanding of what the Bible teaches on matters where we differ.

We must take seriously the urgency of the task. Paul says, “Make every effort to keep the unity of the Spirit through the bond of peace.” That expression, “make every effort,” is intense—it speaks both of eagerness to get something done, and exertion in doing it. The church of Christ is called to be eager in manifesting her oneness and to do what needs to be done to keep it, even at the cost of time and energy. We do not have the luxury of sitting back and saying, “disunity is unfortunate, but that’s just the way things are—the church is fragmented but we’ll just have to wait for a better day.”

He says “be completely humble.” That is not a word which the average unbelieving Greek would have applied to himself. It is a word that he would have seen as descriptive of a slave groveling in the dirt before his master. Humility was not considered a desirable trait. But, you see, when the Lord Jesus Christ came, something dramatic happened. The Lord of glory humbled himself and took the form of a servant. Humility, despised by the Greeks, was the attitude characteristic of Jesus’ life. Humility is also to be characteristic of those who belong to Jesus. It will show itself in the way we deal with those with whom we differ.

Again, he says “be gentle.” This word, sometimes translated meek, has nothing to do with timidity or weakness. The Bible’s picture of a meek person is not somebody who has to go tiptoeing around, being careful not to offend people for fear of getting into trouble. The word indicates a controlled strength. The meek person is like the Son of God whose meekness outshone even that of Moses. Christ could have called legions of angels to his defense. He didn’t need to take abuse from anyone, yet he kept his power in check. He was the one who would not break a bruised reed or quench a smoking flax. We need to be like Jesus if we hope to maintain the unity of the Spirit in the bond of peace.

Finally he says we are to be patient, bearing with one another. We all know people who are hard to deal with—it seems that they can’t open their mouths without alienating someone. If there is a way to say something that will make folks angry, they find it. Unfortunately some of them are in the church of Christ. What do you do with them? Paul says you deal patiently with them; you bear with them and you remember how patient Christ is with you. You are not being called upon to do anything that even approaches what your Savior does every day for you. Think of all the ways in which you have tried Christ’s patience today, yet he has borne with you. He has allowed time for repentance. We are called upon to act that way toward those difficult brothers and sisters.

What has all this got to do with keeping the unity of the Spirit in the bond of peace? Well, just this. If, by God’s grace, we reflect these characteristics of the Lord Jesus Christ, we will be able to deal with those hard things that need to be dealt with when we differ with our Christian sisters and brothers. Some of those differences will be of a very serious character. They will be matters posing a strong challenge to the honor of Christ. There are ways in which portions of the church, and people within every portion, have perverted the teaching of God’s Word. Those perversions need to be addressed. But the question is, “Will you do it Christ’s way: with humility, with meekness, with patience?” It is possible for Christians to disagree strongly and yet do it in a way that maintains the unity of the Spirit in the bond of peace. But it is possible only if we know how Christ humbled himself, accepting a human nature for our salvation. It is possible only if we are meek, willing to trust Christ, through his Spirit, to control the situation with his strength. It is possible only if we are willing to be patient with others because Christ has been, and is, patient with us.

No one can destroy that unity which Christ has given his church. All those who truly belong to Christ will, in glory, enjoy that unity in a way that they can’t begin to imagine now. As we reflect on what Christ has already established we can begin to anticipate that enjoyment. But now we must be concerned about showing the rest of the world what we have in Christ, about manifesting that oneness in such a way that people see that the Father has sent the Son.