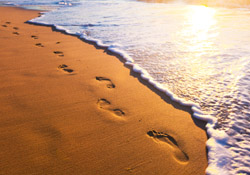 As we turn to the gospel of John, however, some of that mystery is resolved for us. It is not by accident that we have so much information on the Holy Spirit given to us in primarily three chapters of John’s gospel. In John 13, Jesus has just told his disciples that he is going away. If that were not enough, he has also told them that one of their number will betray him, another will deny him. The disciples, no doubt, at the end of chapter 13, are in a state of turmoil. As we come to chapter 14, we can see why Jesus begins with such comforting words, “Do not let your hearts be troubled. Trust in God, trust also in me.” In seeking to comfort his disciples, Jesus begins his discourse on the Holy Spirit. He seems to be telling them that the best way to prepare for the absence of the Son of God is by coming to grips with the presence of the Spirit of God.

In 1 John 2:1, the apostle calls Jesus our Paraclete. The NIV rightly translates this into the phrase, “one who speaks to the Father in our defense.” A Paraclete is one who is an advocate, one who is “called alongside of” someone for a purpose. John assures us in his first epistle that when we sin, Christ our Paraclete is there in heaven defending us on the basis of his shed blood, pleading our case because of the propitiation he had made. Jesus Christ is the Paraclete.

The Holy Spirit, therefore, is not the Paraclete, he is another Paraclete. In other words, as absolutely necessary as it is to have Christ our Righteousness pleading our case before the Father, it is not enough. Because we are so sinful and so weak, we also need one who is another Paraclete, one who will plead our case here on earth, who will stand alongside of us here as Christ stands with the Father there. It is for that reason that the Holy Spirit is called “another Comforter” (KJV).

Whenever we use the word “comfort” today, we typically mean a relative absence of pain or inconvenience. It is unfortunate that the word has not retained its original meaning. “Comfort” is a word taken from the two Latin words cum forte meaning, “with strength.”* As the “other” Comforter, the Holy Spirit comes to us, Jesus is telling his disciples, not when the battle is over, not when the dust has settled and we’re counting our bruises, but with strength in the midst of the battle. He comes to us to enable us to stand during the onslaught of temptation and pressure that tries to mold us into conformity with the world.

Such is the reason that Christ’s comfort to his disciples comes in the midst of an emphasis on obedience (John 14:15, 21, 23, 24). Those who obey the word of Christ are, by definition, in the battle and therefore need the comfort (strength) of the Holy Spirit as they fight the spiritual war.

All of us are called to battle. Some of our battles are more internal than external, battles of physical or emotional health, battles with indwelling sin. Other battles are more external than internal, battles of persecution, of unjust hatred (John 15:25) or with others who seek to oppose our faith. The apostle Paul obviously experienced the full extent of tribulation. He was “hard pressed on every side,” he was perplexed (internal) and persecuted (external). But Paul knew what his Master had told his disciples. The Spirit of truth has come to be our other Paraclete who stands alongside of us with strength during the battle so that with Paul we can say we are neither despairing nor forsaken nor destroyed (see 2 Corinthians 4:7f.) because the Spirit has come to fulfill in us what Christ did with his disciples.

For those who trust in Christ, the Holy Spirit’s ministry is not quite as mysterious as it might, at first glance, seem to be. He is the One who has been sent by Christ to glorify him (John 16:14) by fulfilling on earth what the Paraclete fulfills in heaven.

No battle is so fierce, no temptation so strong that the other Paraclete cannot provide for us the strength to be obedient when the pressure is the most intense. “Do not let your hearts be troubled. Trust in God, trust also in me.”

* J. I. Packer mentions this as one of the primary attributes of the Spirit in, among other places, Keep in Step With the Spirit, New Jersey: Fleming H. Revell Co., p. 6l.