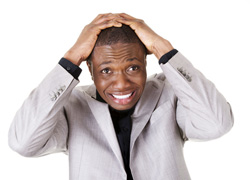 “Then I became a Christian, and all of my problems just went away!”

I don’t remember the name of the girl who said it. She was about my age, and she had brown, shoulder-length hair. We were at a Student Venture gathering at someone’s house with about 50 or so high school students—Student Venture is the high school version of Campus Crusade for Christ, the group started by the late Dr. Bill Bright.

She made her comment after being asked by one of the leaders to stand up and give her testimony. At first she seemed rather nervous, and she talked about how she had gone through various problems. But then, someone told her about Jesus Christ, she accepted Him into her heart, and then she made her bold statement.

At the time I was a month or two shy of fifteen, and I was still in the process of mourning the loss of my older brother—we lost Jeff in a car accident just 13–14 months previously. I was also the kid that got picked on, and my biological parents were divorced. My family and I were then going to a mainline Protestant church where Christ and the doctrines of grace were not preached. Suffice to say, this offer of giving one’s heart to Jesus and seeing all of your problem being eradicated sounded pretty good. I remember thinking, “Where do I sign up?”

It didn’t take long to realize that that’s just not the way it works—and to be fair to Student Venture, I recall some of the leaders looking uncomfortable when that girl made her declaration of having a problem-free life.

What Does the Bible Say?

What’s wrong with a statement like that? The answer is very simple: it’s wishful thinking at best, bad theology at worst. The Bible simply does not know anything about Christians living trial-free lives. If anything, it’s quite the opposite: believers are expected to have to endure trials.

That is a point on which the Bible is very clear. In fact, the Apostle Peter told his readers, “Beloved, do not be surprised at the fiery trial when it comes upon you to test you, as though something strange were happening to you” (1 Peter 4:12).

Peter is saying that to some extent, trials are going to be normative for the Christian life. By experience, we know that they will vary from saint to saint. They can happen suddenly and without warning; at times they can be relentless, and they range from being mere irritants to life-shattering.

But regardless of the manner and degrees in which they come, Peter is telling us that we should not be surprised by them “as though something strange were happening to you.”

Two items should be immediately noted: first, Peter says that the fiery trial comes “upon you to test you.” This shows us that they are not without reason; there is a purpose behind them. That said, what does he mean by “test”? The answer is that in the Bible, these “tests” are given by God to strengthen us and produce endurance (James 1:2–4, Romans 5:3–5).

Very often, we have to go through trials so that we will be strengthened. Perhaps God might send a trial our way for that very reason. Or, it could be to get our attention. In his book The Problem of Pain, C. S. Lewis provided a very telling comment: “The human spirit will not even begin to try to surrender self-will as long as all seems to be well with it … But pain insists upon being attended to. God whispers to us in our pleasures, speaks in our conscience, but shouts in our pain: it is His megaphone to rouse a deaf world.”

This is why our trials are important: they free us from sin and self-reliance and cause us to realize that we need to rely upon Christ.

Suffering as Our Lord Suffered

Second, and more to the point, Peter goes on to tell us that as we endure trials, we are merely following in the footsteps of our Lord: “But rejoice insofar as you share Christ’s sufferings, that you may also rejoice and be glad when his glory is revealed” (1 Peter 4:13). This is because the Christian life involves our being conformed to Christ’s image. And as the prophet Isaiah made clear, this entails great suffering.

In light of this, we need to understand that Christ’s sufferings were entirely undeserved. When He was put on trial, Pontius Pilate declared, “I find no guilt in this man” (Luke 23:4).

And yet He suffered, taking the sins of His people upon Himself.

Sometimes, when we go through a trial, we are tempted to scream, “This is so unfair!” To some degree, that might be true. Yet no one ever suffered more, and experienced more unfair treatment than Jesus Christ did. Christians would do well to remember this when they go through hardships.

But what did His suffering accomplish? He was raised from the dead, which Paul states was for our justification. In other words, His resurrection confirmed that His offering up of Himself on the cross was sufficient to atone for our sins. It’s all that is needed for sinners to be reconciled to God from sin, which is far and away our greatest need. In short, because He suffered, we benefit.

All of which takes us back to the point at hand: as Christians, we partake of His sufferings before we partake of His glory. As He said to His disciples, “If the world hates you, you know that it hated me before it hated you” (John 15:18).

Because He suffered, we must suffer, too. But as we do, we realize that our trials are not for nothing; they serve a purpose in sanctifying us, growing us into holiness and Christlikeness. So really, Christians should not go out of their way to look for trials—if you are a believer, they will come in due time. And this is not to suggest that God does not bless us in many ways in this lifetime, which He surely does. But to repeat—and frankly, it cannot be repeated often enough—the trials of the Christian life, painful though they may be, serve the most glorious of purposes.

Indeed, this has always been the case for God’s people. Consider Abraham, the father of the faithful. He began as one pagan gentile among many. It wasn’t until he was 75 years old that God revealed Himself to him and lavished untold blessings upon him.

But what was the immediate result? When they arrived in the Promised Land, they had to leave almost immediately as they were hit by a famine. And that was just the beginning:

Of course, there are numerous theological ramifications for Abraham’s life–not least among them that he understood in some sense that this promised land merely pointed ahead to something far better, and that his offering of Isaac prefigured Christ’s resurrection.

But for our purposes, we see that even though he preceded Christ by some 1,400 years, his life is illustrative of Peter’s point: we must partake of Christ’s sufferings before we partake of His glory. Such is the case with Abraham: while he preceded Christ, he nonetheless believed in God’s promises which find their fulfillment in Him Along with the other great saints in the “Hall of Faith” chapter (Hebrews 11), Abraham is now part of the “great cloud of witnesses” that cheers us on as we “run with endurance the race that is set before us, looking unto Jesus, the founder and perfect of our faith, who for the joy that was set before him endured the cross, despising the shame, and is seated at the right hand of the throne of God” (Heb. 12:2–3).

In short, we run the race called the Christian life as it is patterned after His own: first suffering, then glory. And the lives of great saints like Abraham are recorded for our encouragement (Rom. 15:4, 1 Cor. 10:11).

Two final words of encouragement: first, Paul writes in Romans 8:18, “For I consider that the sufferings of this present time are not worth comparing with the glory that is to be revealed to us.” This verse tells us that what awaits us in Heaven far outshines anything you have had to endure in this lifetime.

Second, Christ has compassion on those who suffer. To just give one example, Mark’s Gospel recounts how He immediately followed Jairus when his daughter was dying in bed. On the way there, a woman with a blood problem touched His cloak. He stopped, took the time to listen to her, then said to her, “Daughter, your faith has made you well; go in peace, and be healed of your disease.”

Had He ignored her touching Him, she would never have known what had cured her. Even though Jairus’ daughter was dying, He took the time to minister to her.

Then, He brought Jairus’ young daughter back to life. Immediately, He saw to her physical needs by commanding her parents to get her something to eat.

In simple little ways like this, Christ took the time to show that He has compassion on those who suffer. He takes time for us as well. The writer to the Hebrews reminds us, “For we do not have a high priest who is unable to sympathize with our weaknesses, but one who in every respect has been tempted as we are, yet without sin. Let us then with confidence draw near to the throne of grace, that we may receive mercy and find grace to help in time of need” (Hebrews 4:15–16).

Yes, our trials serve a purpose in that they conform our lives to Christ. Yes, we will never have to suffer to the degree that He did. Even still, one’s trials do not suddenly disappear the moment they become a Christian. But be thankful: they are a sign that you are His, that you have a glorious future ahead of you, that He does care, and you can rest assured that He does not leave you alone in them.

Of course, there are many types of trials that Christians have to endure; everything from betrayal by a close friend to health and finances to being misled by false assumptions about what the Bible teaches. What does God’s Word say about these trials? I hope that you will stay with me as we explore this topic together in the coming weeks.