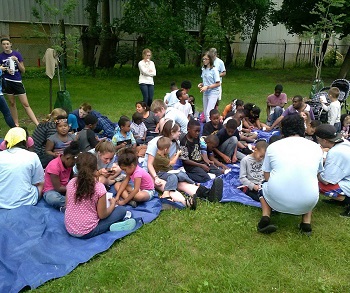 An RHM is somewhat like a chef who has many meals in various stages of preparation. Glenn Jerrell, Regional Home Missionary for the Presbytery of Michigan and Ontario, assists congregations preparing to become particular congregations of the OPC, organizes Bible Studies, and is doing exploratory work in a region that covers portions of three states and one Canadian province.

Jerrell has served as the presbytery’s RHM for about three years. Several of the mission works in the presbytery were established before he took the position, and his relationship with each is different, but most mission works go through the following stages in one form or another.

When someone (or a group) from a new area express an interest in planting an Orthodox Presbyterian Church, the RHM is the point man. Recently, Jerrell began doing exploratory work in Battle Creek Michigan. Why Battle Creek? Because someone asked—and because conditions are right. The area had been identified in the past as under-churched. Another big factor was that Tim Bero, who recently retired from his position as pastor of Community Presbyterian Church in Kalamazoo, is willing and able to lead exploratory Bible studies. One family has already indicated their willingness to participate in the work. Jerrell and Bero are in the process of contacting others who have expressed interest.

The two visited the city planner and visitors bureau to learn more about Battle Creek, which is located in the I-94 corridor. They are now looking at locations that would be suitable for holding a Bible study. As things fall into place, the focus will shift to outreach and advertising. Jerrell has found that creating a Facebook page is a good initial step in getting the word out.

Facebook is one of the outreach methods used to gather people in Lake County, Indiana. More than 30 people have regularly followed updates to the page, while three families have gathered for Thursday night Bible studies in the meeting room of an Outback Steakhouse. Two other families are not able to join the group on Thursdays, but have expressed interest in joining the work. This summer, Dan Nicholson is leading the studies as a part-time intern. Jerrell also plans to go door-to-door in Crown Pointe in coming weeks.

Outreach isn't done exclusively by the RHM. He has encouraged the members of the Bible study to pray for their neighbors. One family has created a list and prays regularly that those on it will be added to the Church, and to the work. The group is also meeting once a month for a meal and a time of prayer.

While New City Fellowship is a daughter church of Harvest OPC in Wyoming, Michigan, and not a work of the presbytery itself, Jerrell has a good relationship with the group. In fact, he's been there so often, that he has been asked if he plans to join!

New City Fellowship has been active in the community, where their building is located in Grand Rapids. They recently held a kids' club in a local park. After canvasing the neighborhood, they had dozens of children attend. Parents also came to see what was going on. As a result, they had 32 first-time visitors the following Sunday.

Hillsdale OPC provides a good example of how the entire presbytery, and not just the RHM, has supported the work of missions. The congregation is enjoying the opportunities that they have in their new building, a converted 19th century railroad depot. This spring, churches throughout the presbytery gave more than $8,000 for repairs and upgrades to the building.

Hillsdale is preparing to ordain and install her own officers and become a new and separate congregation of the OPC. Fremont OPC in Fremont, Michigan, is also preparing to particularize. Jerrell also assists works in Beamsville, Ontario and Manistee, Michigan as they develop.

Glenn has been slowed by health problems. Allergy-induced asthma shut him down for about a month this spring. Recent tests showed that he is allergic to more things than in past tests, but he says the care he is receiving is top-notch. He has also been hobbled by broken bones in his foot, but recently he has been able to walk 10,000 steps a day.

Pray that the Lord will sustain Jerrell as he serves the Presbytery of Michigan and Ontario. He hopes that in coming years that a new church can be planted each year, and eventually, perhaps two a year. The fields are white for harvest, pray that the Lord will bless this worker's efforts. Pray too for the church planters in the presbytery, as they bring God's word from week to week and reach out to the lost in their communities.