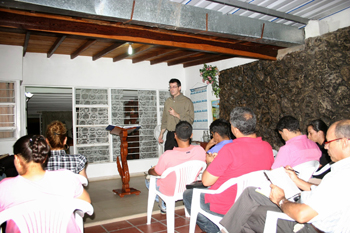 Do you believe Reformation is still happening? There is reason to believe. In a country dominated by Roman Catholicism; in a country that is distinguished, perhaps, by the longest-standing guerrilla army on the planet; in a country most well-known for cocaine production and narco-trafficking; the Lord, by his amazing grace, is quickening saints and ministers with the spirit of Reformation. What follows is a description of how God is continuing to reform churches and the lives of men and women in Colombia, South America.

Like the call of the Macedonian man, Christians have reached out for help from the Orthodox Presbyterian Church to assist them in the work of God in Colombia. They have asked us for counsel on how to grow Presbyterian churches and to assist them in training men and ministers for the work of gospel ministry. In response to this request, I accompanied our Foreign Missions associate general secretary Douglas Clawson and Jim Jordan (serving as Doug’s translator) on a two-week trip last April.

I was aware that several men had already traveled to Colombia to teach and preach. I had even translated a sermon for one of my mentors, Jonathan Falk, who went a year ago and informed me how the ministry was commencing in Colombia. I was honored to be asked to teach a six-hour section of our systematic theology by leading many pastors and their parishioners in a study of the Doctrine of Man. These lectures were given in four cities in three different regions of Colombia. The bustling capital Bogota is contrasted by the quieter city of Cucuta that borders Venezuela. The second half of our trip took us to the northern coastal cities of Barranquilla and Cartagena.

In the lectures I focused on the incredible privilege of being image-bearers of God. I then recounted the tragic Fall and its consequences that cry out for a great Savior, our second Adam, who restores us to fellowship with God and promises us a glorious future in Heaven. I tried to maintain a sense of this trajectory from Creation to Consummation (or new creation) so that people would see how the beginning and end of Biblical Anthropology is focused upon the glory of God our Creator and Redeemer. Several men and ministers travel from their local work as pastors and teachers to consistently visit outlying cities and villages where they minister to extended family, friends, and contacts they have made through years of steadfast service for Christ. After serving a local congregation in the morning, one of these pastors travels two hours by bus to minister in another city. This brings him home after midnight to rest for his weekday work in the morning. Another pastor evangelizes each Sunday, then travels on Mondays to continue years of service to a small village of people who have no distinctively Christian witness. Two others grew up in a very poor and dangerous "barrio" not far from where they now live and work. They are both ordained ministers who have jobs during the week as teachers. But they are also dedicated evangelists who consistently invite people to hear a gospel message each week. This sort of tireless effort for the spread of the gospel humbles those of us who have more fixed pastoral oversight in our local area only. May we continue to pray for those who are being "spent for the gospel" in this way.

Of all the men and ministers we met there, only one is a pastor paid by his local congregation. All the other pastors we met function as ordained men who shepherd Christ's lambs each week while maintaining other jobs. Each seems to be very concerned for evangelism and church-planting. This too was humbling and instructive. And although they all confessed being tired from the work, each demonstrated a continued desire for deeper instruction and oversight to build Presbyterian churches. Their humility to ask for help was coupled with a godly desire for growth in grace.

Although mission work is tiresome, God was pleased to encourage our souls in service to his kingdom. The overall response of the saints in Colombia was electric. They are hungry for the living bread of the Word and that is so invigorating for any minister. They are thirsty for the living water that quenches a soul's deepest thirst. Their enthusiasm ignited in me a freedom and joy to preach and teach that I have rarely felt in my native language. Despite the heat bearing down upon us in each location, often with only one fan for anywhere from thirty to eighty people, the lectures and accompanying question-and-answer times were very exciting. It was as if the Spirit of God offered a cool breeze to fill all of our sails for the work of the gospel.

So, the answer to my opening question is a resounding "Yes!" The Reformation continues. Please pray for our Presbyterian brothers and sisters in Colombia, South America.