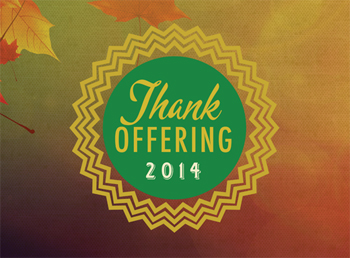 Orthodox Presbyterian Church members and friends have shown that when the needs of Christ's church are great, so is their giving. Last November when the church was asked for a generous Thank Offering of $850,000 because overall giving was $117,800 below budget, people gave far beyond what was asked.

This year the need is even greater—the current deficit is $252,862 behind the budget. The hope this November is that the people in the pews will open their hearts even more generously when the Thank Offering is received by congregations throughout the OPC.

Each year the General Assembly determines the annual Worldwide Outreach budget for our three program committees: Home Missions, Christian Education, and Foreign Missions. The Thank Offering is requested in November to give the final boost in giving to complete our funding of Worldwide Outreach.

Typically a quarter of the year's offerings are received through the Thank Offering. The 2014 Worldwide Outreach budget is slated for $3,790,000 million or about $178 per communicant member. To pay for these ministries, larger churches often give beyond the per-member amount to help our smaller sister churches with less revenue.

When the last dollars from the 2013 Thank Offering were collected, the church had received $140,000 above budget. Once that Thank Offering was added to the overall Worldwide Outreach revenue, our giving exceeded the budget last year by $163,433!

This September, our revenue figures show a $252,862 deficit so far this year for Worldwide Outreach. To help the committees replenish their revenues from previous lean years and move forward in their work, the OPC set a goal of $950,000 for this year's Thank Offering. Ample giving this year would help replenish the drained reserves of recent years and provide for needed ministries and services that have been on hold for several years.

If this year's Thank Offering is less than budgeted, the three program committees will need to dig deeper into their reserves to pay their church planters, pastoral interns, and missionaries. They may also need to cut programs and personnel.

"Giving has been almost 11.5 percent behind budget, so without a generous Thank Offering, the Committees will fall short of their goals for 2014," said David Haney, director of finance and planned giving. "Without a generous Thank Offering, all the Committees are considering cutting back on their existing programs due to limited funding this year."

In 2015, the Home Missions Committee would like to expand their ministries by adding eight new home missionaries to their current roster of thirty-five. They also want to fund two more regional home missionaries in 2015, which would increase their slate to nine men whose goal is to start churches from the very first contact. Without the new church planters, Home Missions general secretary John Shaw said, "Groups that are already meeting for worship or Bible study will go another year without a minister to shepherd and care for them."

If this Thank Offering reflects last year's generous giving, several presbyteries may call church planters to serve mission works that are currently in process. They also could fund one or two more regional home missionaries. Several presbyteries also are starting to reach urban areas so these efforts could be funded. "Additional funds would allow us to provide great support for these works," said Shaw.

"Christian Education, through its support of its ministries, in particular the intern program, has eaten into its reserves by 25 to 30 percent, said Christian Education general secretary Danny Olinger. "A nice Thank Offering will help stabilize our reserves."

The Foreign Missions Committee sends eighteen full-time and two part-time missionaries to eight countries and ministers on a regular basis to five other countries. There are also eighteen missionary associates working with those missionaries. Next year, OP pastor Charles Jackson and his family are slated as missionaries to Mbale, Uganda. "We issued a call to him in 2013 with the view to getting them on the field in 2015," said Foreign Missions general secretary Mark Bube. "A good Thank Offering is critical. Right now Worldwide Outreach is running a quarter of a million dollars behind."

If the Thank Offering doesn't raise enough funds to meet the needs, Bube said, "We'll have to make some very difficult decisions." But over and over he has seen God answer their prayers. "Our experience has always been that when we tell God's people the need, they respond as God moves them."

A direct gift to Worldwide Outreach may be given on the OPC.org home page. Click on the Donations tag in the upper right corner of the home page. The PayPal button is at the bottom of the next page.

Thank you for your extraordinary gift.