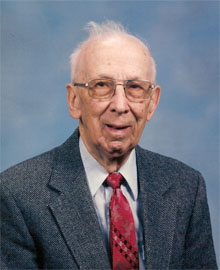 Russell Piper was born on a farm in Illinois on October 4, 1906. This year he becomes the first minister in the Orthodox Presbyterian Church to reach the century mark. They took the boy off the farm, but you know the rest. Two years ago he was featured in the local newspaper, riding a horse at 98.

When Russ was a boy he contracted tuberculosis, and his mother prayed fervently for him. She promised God that if he spared her son, he would be a minister. He earned excellent grades at UCLA, and he also joined the wrestling team. His small and wiry frame placed him in the lightweight division. He has kept his healthy condition during his adult years, especially with pushups that he would ritually perform on his birthday, counting out one for each year of his life. He did this until his 93rd birthday, but after he broke his hip, he had to curtail this stunt.

He met Lucille Ziegler at Vermont Avenue Presbyterian Church in Los Angeles, and after they had completed their education at the Bible Institute of Los Angeles and UCLA, Russell headed for Westminster Theological Seminary in Philadelphia. Lucille worked on her Masters degree for a year and moved to Philadelphia where they were married in 1935. While Russ was in seminary their first child was born the same year as the OPC. Barbara Lucille was just 6 months younger than the church, arriving on December 24, 1936.

After earning the M.Div. in 1938, the Pipers returned to Southern California where Russ was ordained and installed as pastor of Westminster Orthodox Presbyterian Church in Highland Park. Dale Ellis was born in 1940, and John Jacob came along the next year. When Russ was called to serve in South Dakota in 1945, their move was delayed while they saved enough gas ration stamps for their travels.

The farm that stayed on the boy served him well during his 69 years in the gospel ministry. Trinity Church in Bridgewater, South Dakota provided their pastor a two-story manse in town with a wood stove for cooking and hot water, a hand pump at the kitchen sink and outdoor plumbing for personal relief. He grew as much food as his modest plot would allow, and they had a cellar full of preserves for the winter. Before the children entered kindergarten, Lucille had taught them to read. Russell made it a family tradition at the dinner table, to teach them tricks and games with math.

His first seven years in South Dakota Russell was a circuit-riding preacher, serving Bethel OPC in Alexandria, SD as well as Trinity Church in Bridgewater. He served as choir director and frequently used special music with quartets and trios. Russell also related well to the youth and became "steward" of Presbytery's Bible Camp in the Black Hills. He made a theatrical event out of mail call, and every year the children would chant for Mr. Piper to stand on his head. He always complied with athletic prowess.

Russell Piper is not known as an articulate orator, or as a profound scholar. He was what must be described as the beloved pastor type of minister. And in 1957 when the Lord seemed to be leading him to answer the call to Faith OPC in Lincoln, Nebraska, the Bridgewater congregation was grieved. The Pipers lived in a small, dingy apartment in the basement of the church in Lincoln. The ministry struggled in town, but a chapel work in the suburbs of the city was showing promise, and in 1963 Russell began more circuit riding work at Pioneer Chapel.

Rosemary Malroy convinced Pastor Piper to come to Mission Valley OPC in Ronan, Montana to enjoy a semi-retirement ministry in 1974. It was during his ministry in Montana that Russ developed his vision for the "Big Sky Presbytery." And it almost materialized. It was the Ronan Church that sponsored and assisted the planting of the work in Missoula and the work in Kalispell. In fact there was at least one family from Ronan that helped plant the work in Billings. In God's inscrutable providence the church in Ronan did not survive, but the other three are thriving, though the Billings congregation has since moved to the PCA.

In Ronan the Pipers became active in the community by serving as president and secretary for the Chamber of Commerce. Russell was a living poster boy for the Montana life. His annual bagging of a deer to fill the freezer became legendary in the Presbytery. Fishing at the dam was usually quite fruitful too. His fruit trees, berry bushes and special hybrid short-season tomatoes evidenced his early roots. In his 80s he was still cutting five cords of wood to carry them through the harsh winters.

When Russell developed macular degeneration and Lucille had a stroke, it became necessary to give up the Montana life that he loved so much. In 1993 they moved to Quarryville Presbyterian Retirement Community in Quarryville, Pennsylvania. Within two months Lucille was taken with another stroke, and Russell has been longing to join her at the feet of Jesus ever since. Although he has lost much of his hearing and almost all of his sight, he has maintained his sense of humor. His table at the dining hall sometimes needed to be quieted because of the raucous exchange of jokes between Russ and his tablemates. It was at Quarryville in his 98th year that he enjoyed his famous horseback ride. It was a very controlled event sponsored by an organization that uses this activity for therapy. He was a little disappointed that he had to wear a helmet instead of his cowboy hat.

His grandson, Calvin Keller, completes a third generation of ministers in the OPC.

His children have arranged to be with him to celebrate his birthday with a party September 30. Old friends have been asked to help shower him with 100 cards for his 100 years.