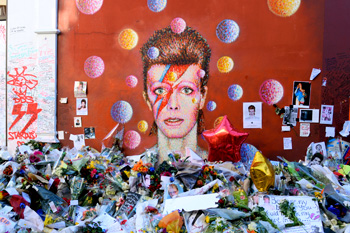 Major Tom can no longer report to Ground Control. Grizzly Adams will never return to the woods. The Hotel California has one less Desperado visiting there. At the start of 2016 three icons of my generation—David Bowie, Dan Haggerty and Glen Frey—died, and many are grieving. The iconic "R.I.P." has been ubiquitous on social media, an expression of both the helpless desire for the departed soul and a subconscious expression of trepidation because each of us knows two things: I could be next and our hope that the rest that comes in death will be a peaceful one. Even more honestly, the very thought of death scares us to, well, death!

Our generation is beginning to come to terms with its mortality, but many are ill prepared. Why? Because our generation (roughly ages 55 and older) is realizing, albeit subconsciously for many, the truth of Romans 1:18-23. We have exchanged the glory of the immortal God for idols made in our own image. We are discovering the truth of Romans 5:12-14, that because of our father Adam's sin in the Garden we are all subject to death. And then there is the theme of the book of Ecclesiastes which marked the music of Bowie, Frey, and other powerful, talented song writers: All of life is vanity. There is a time to live and a time to die. Now, for these three and many more famous and not so famous already this year, death has claimed its victory.

But Adam did sin and because he did, Major Tom, Grizzly Adams and the Desperado have died, and every last one of us will eventually follow them. That begs the question, what can be done? We hope for miracle drugs and, ultimately, a preventive for death. After officiating over fifty funerals and witnessing too many congregation members suffering physical and mental impairment, my twenty-six years of pastoral ministry have clarified for me that our best efforts to prolong life often lead to a longer period of slow decay of mind and body. The truth is, and the Bible's message emphasizes this: Man cannot save himself because he is trying to cure the wrong disease. The real disease is spiritual, not physical and mental. It is sin, the lack of conformity unto and transgression of the Law of God. God, who is just and of purer eyes than to look at sin, must punish sin. His chosen punishment is death—death here in this life and then, after the last judgment of Christ, eternal death in hell.

Are we then hopeless? Not at all. Ecclesiastes gives us the cure to our innate sense of the vanity (worthlessness) of life in chapter 12:13-14: The end of the matter; all has been heard. Fear God and keep his commandments, for this is the whole duty of man. For God will bring every deed into judgment, with every secret thing, whether good or evil. If we will turn to God and seek him with all of our hearts we can have eternal life. Death in this life will be transformed into a passage to heaven and, when Christ returns, an unbroken existence in the new heavens and earth which Christ will create at the end of time.

Since sin is the reason for decay and death, the cure begins with sin being forgiven so that God's wrath will be turned away. We cannot do this for ourselves, but the Lord Jesus Christ has done the work for us. The Son of God became the man Jesus Christ who obeyed every last bit of God's Law and then took upon himself the guilt and shame of the sins of men. He willingly accepted the task of being punished by God for the sins of men when he died on the Cross as a man abandoned by God the Father, as evidenced by his dying cry of despair, "My God, my God, why have you forsaken me?” He bore the despair every generation has felt upon the death of others, and overcame death when he was raised from the grave three days later. The answer to our despair and fear of death and death itself is to forget about trying to earn God's pardon and forget trying to extend our lives on earth. Trust in what Christ has done instead.

If you, dear reader, are in despair over the swift passing of so many you looked up to in your family and in the public eye, then follow another instruction given by the writer of Ecclesiastes:

Remember also your Creator in the days of your youth, before the evil days come and the years draw near of which you will say, "I have no pleasure in them"; before the sun and the light and the moon and the stars are darkened and the clouds return after the rain, in the day when the keepers of the house tremble, and the strong men are bent, and the grinders cease because they are few, and those who look through the windows are dimmed, and the doors on the street are shut—when the sound of the grinding is low, and one rises up at the sound of a bird, and all the daughters of song are brought low—they are afraid also of what is high, and terrors are in the way; the almond tree blossoms, the grasshopper drags itself along, and desire fails, because man is going to his eternal home, and the mourners go about the streets—before the silver cord is snapped, or the golden bowl is broken, or the pitcher is shattered at the fountain, or the wheel broken at the cistern, and the dust returns to the earth as it was, and the spirit returns to God who gave it. (12:1-7).

Trust in the work of Jesus and then, and only then, will you rest in peace, both in this life and in the next.