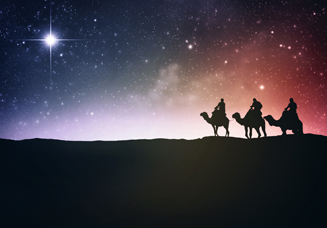 Jesus and His Mother

The Bible believes in a divine Savior, and a divine Savior can be expected to come in a remarkable way. It is a presupposition of New Testament thought which needs no argument, nor many references. The only accounts we have in the New Testament of the virgin conception of Jesus appear in the gospels of Matthew and Luke.

Matthew wrote for Jewish people, and it is no surprise that he cites the 730-year-old prediction of the prophet Isaiah as being fulfilled by Jesus' birth to a virgin (Matt. 1:22-23).

After all, the Hebrew Old Testament had been translated into Greek by Jewish scholars about 200 b.c., and they had regarded the Hebrew word almah in Isaiah 7:14 as requiring translation by the Greek word meaning "virgin" (parthenos), even though almah is not the normal word for "virgin." This is a good argument against some scholars who insist that "a young woman" was all that Isaiah had in mind.

The Jewish translators had the context on their side, for the Isaiah 7 passage leads us to expect a truly remarkable sign from the Lord himself, a child who is called Immanuel ("God with us"), not because of a mother's overzealous or disturbed piety, but because it is actually so.

Consider the facts: Isaiah 7 promises that the unfaithful royal house will not be confirmed (vs. 9), but will be supplanted by a new and better king. This faithful king will be born of a virgin, and the prophecy expresses the certainty of the fulfillment of God's promise by viewing the mother as already about to give birth to Immanuel (literally: "a virgin with child bearing a son"). In a few short years, when a child can discriminate between good and bad, the political situation that King Ahaz fears will change radically (vss. 15-17). That change will confirm God's faithfulness and testify to the certainty of the ultimate coming of the one who inherits the true throne of David—Immanuel, "God with us"!

In Isaiah 8:8, we have the land of Israel spoken of as already belonging to Immanuel, although he has not yet been born. In Isaiah 9, we have the same child actually born, receiving such names as "Mighty God" and "Prince of Peace" and succeeding to the Davidic throne (see Acts 2:29-30), while Isaiah 11 shows his glorious reign, which brings true and unending peace.

This is no ordinary child, and thus he has no ordinary entry into human life! And there is no twisting of Scripture by Matthew, either! Isaiah 7 is a sign to the House of David in the manner stated—a promise that sustains the messianic hope in times of trouble, and a promise that is fulfilled in Mary's child, Jesus Christ: Immanuel, "God with us"!

When the angel announced that she was to be the mother of the Savior, Mary sang a song we call the Magnificat (Luke 1:46-55), in which she expressed her humble reliance on the Lord. She was a good and remarkably humble young woman. She treasured her recollections of all the events connected with the birth and early life of Jesus (Luke 2:19, 51), not understanding everything, yet trusting the Lord to make everything plain in due time.

At the marriage in Cana, she had sufficient confidence to tell the waiters, "Whatever he tells you to do, do it" (John 2:5), although as yet Jesus had done no miracle. Yet Mary is not prominent in the gospel accounts, and there is more than one pointed reminder of Jesus' special ministry, which transcends ordinary family ties: "The one who does the will of my Father in heaven is my brother and sister and mother" (Matt. 12:50). Yet from the cross Jesus provided for his (widowed?) mother's care (John 19:25-27), and Mary was among the earliest disciples (Acts 1:14).

The birth from the Virgin Mary is entirely fitting and bears witness that Jesus is the incarnate Son of God, the Word made flesh, who made his dwelling among us (John 1:14). The one who was born at Bethlehem is both God and man. The eternal Son took to his divine person a true human nature prepared for him by the Holy Spirit. He is Immanuel, "God with us"!

He is also called Jesus, meaning "God saves," because he saves his people from their sins (Matt. 1:21). In our nature, he acts on our behalf, meets our obligations, pays the penalty due from us, and secures an everlasting place for all believers in the new world of righteousness which he is preparing.

Such a Savior is not for remembering in a vague and sentimental way once a year, but for worshiping every day! God's people acknowledge him to be Immanuel, "God with us." Do you?

The Roman, Eastern, and orthodox Protestant churches agree that Mary was a virgin when Jesus was conceived, and that Jesus was conceived through the power of the Holy Spirit, without human agency. However, there are other teachings about Mary which are not supported by Scripture, which have place in some non-Protestant churches. They grew up gradually and eventually became common. In the West, but not the East, they have been defined as dogmas that must be believed by faithful Catholics.

The Perpetual Virginity of Mary

The awe and reverence for Jesus, the Son of God, was in part transferred to Mary as the new Eve. Whereas the general view in A.D. 200 was that Mary's marriage to Joseph was a real one, by A.D. 400 the reverse was the case.

Ascetic tendencies and the rise of the monastic movement established Mary as the ideal of virginity. The Scripture references to the brothers of Jesus (Matt. 12:46-47; 13:55; John 2:12, 7:3, 5, 10; Acts 1:14) were now taken in a less than natural sense as referring to cousins or to children of Joseph by a former marriage.

The perpetual virginity of Mary is almost certainly not true. There is nothing explicit in Scripture or derived from Scripture by good and necessary reasoning that favors it. The impression one gains from Scripture is decidedly against it.

The Immaculate Conception of Mary

This doctrine was defined by Pope Pius IX in 1854 and teaches that Mary herself, at the first instant of her conception, was preserved immaculate from the stain of original sin. The thought here is that it was necessary that Mary herself be without sin if she was to be the mother of the Savior, and so she received the benefits of the Son's redeeming work in advance.

This teaching surfaced in the fourth century in the course of debate over the nature of Christ. The orthodox used the term "Mother of God" (theotokos) to stress the deity of Jesus, particular at the Council of Chalcedon in 451, but the term in less careful hands furthered the cult of Mary. As the divinity of Jesus overshadowed his humanity, the need for a more human and sympathetic mediator was felt. Popular devotion placed Mary at the head of the saints in glory as the Queen of Heaven. She became a source and bestower of grace rather than the humble recipient of grace. The worship given her was called hyperdoulia, which was higher than that given to other saints (doulia), but less than that offered to God (latreia)—distinctions which are not always appreciated by the common people, and which are not biblical anyway.

The doctrine was not promulgated until 1854 because there were differences among church leaders as to whether Mary's sinlessness included freedom from original sin as well as actual sins. But there is not the slightest support in Scripture for the doctrine of the immaculate conception of Mary, while the thrust of the entire Old and New Testaments is against it.

The Bodily Assumption of Mary

This doctrine teaches that Mary's body was raised from the grave shortly after she died, that her body and soul were reunited, and that she was taken up and enthroned as Queen of Heaven. It was defined as a dogma to be believed by all the faithful by Pope Pius XII in 1950, and is the logical development of the Immaculate Conception: if Mary was sinless, she was not exposed to death as we are. The idea appeared first in the fourth century, and it was widespread by the seventh century. This doctrine provides the basis for belief in Mary as the Queen of Heaven and as having a mediatorial role in obtaining grace for us.

There is a fourth dogma which, if enacted, would declare Mary not only the Mother of the Church (as was done in 1964 by Pope Paul VI when proclaiming the Dogmatic Constitution on the Church of the Second Vatican Council), but Co-redemptrix with Christ. This would be the final development of Marian devotion and has already been discussed. In some Roman Catholic countries, it is already included in popular devotion.

Popular devotion today varies between extravagant worship of Mary to a considerable measure of reserve. Yet even a mainstream publication like the Catholic edition of the Australian Hymnbook (1977) includes these verses:

O gentle, chaste and spotless maid,
we sinners make our prayers through thee;
remind thy Son that he has paid
the price of our iniquity.
Virgin most pure, star of the sea,
pray for the sinner, pray for me. (#612)

Sinners, we worship your sinless perfection;
fallen and weak, for your pity we plead:
grant us the shield of your sovereign protection,
measure your aid by the depth of our need. (#613)

The problem with all this is that it lacks the sure foundation of the Word of God, and it is highly dishonoring to the person and work of our Lord Jesus Christ, "the only mediator between God and man" (1 Tim. 2:5). A recovery of the biblical gospel will lead to the abandonment of these false doctrines.

Mary is dishonored when she is put in the foreground and false doctrines are taught about her. Concerning her son, Mary says: "Whatever he tells you to do, do it" (John 2:5). What does Jesus tell us? "You may ask me for anything in my name, and I will do it" (John 14:14). The name of Jesus prevails. Take Mary's advice: Do what Jesus says. Look to Jesus alone as the source of grace for sinners. He is Immanuel, God with us! He is not only true God, but true man.

"Since the children have flesh and blood, he too shared in their humanity so that by his death he might destroy him who holds the power of death—that is, the devil—and free those who all their lives were held in slavery by their fear of death" (Heb. 2:14-15 NIV). "Such a high priest meets our need—one who is holy, blameless, pure, set apart from sinners, exalted above the heavens" (Heb. 7:26 NIV). Trust him alone!

The author is a minister in the Presbyterian Church of Eastern Australia. This article has been produced as a leaflet and is available from the author at 358 Mountain Highway, Wantirna, Victoria 3152, Australia. It is reproduced here (slightly edited) by kind permission. Unless otherwise indicated, the author provides his own Bible translations. Reprinted from New Horizons, December 2002.