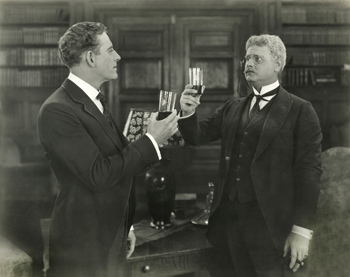 Alcohol and the OPC – An Historical Perspective

In 1811 the General Assembly of the Presbyterian Church in the USA formed a committee to "devise measures, which when sanctioned by the General Assembly, may have an influence in preventing some of the numerous and threatening mischiefs which are experienced throughout our country by the excessive and intemperate use of spirituous liquor.”"

This committee reported to the 1812 Assembly, and a set of recommendations were adopted. The recommendations called upon ministers to preach, teach, write and work against "the sins and mischiefs of intemperate drinking." Church Sessions were expected to exercise special vigilance over all persons in their churches, warning them and remonstrating against these "mischiefs."

This commitment to abstinence from alcohol would be affirmed by both the Old School and the New School, as well as by the reunited Presbyterian Church. The 1877 General Assembly recommended that all members of their churches "be found the fast, unflinching and active friends of temperance, abstaining from all forms and fashions which would countenance to any extent the sin of intemperance, avoiding even the appearance of evil." In short, they demanded that their officers and members practice "total abstinence from everything that will intoxicate." They resolved "that total abstinence from all intoxicating drinks as a beverage is demanded from every Christian by the condition of society, the purity of the Church and the Word of God."

When the Orthodox Presbyterian Church was formed, the issue of beverage alcohol surfaced quickly. Critics of Dr. Machen insinuated that he was himself a drunkard, and that his family had gained their wealth through breweries– an accusation that Ned Stonehouse thoroughly debunked in his biography of Machen.

The conflict over alcohol came to a head at our third General Assembly, held in 1937. The Presbytery of the Chicago Area overtured the Assembly, asking that the new church reaffirm the declaration of total abstinence from all intoxicating drinks as had been passed by the 1877 General Assembly of the PCUSA.

The Presbytery of California presented a concurring overture. The Presbytery of New Jersey also weighed in, submitting an overture which argued a moderating position. While acknowledging the sinfulness of drunkenness, the PNJ urged the Assembly to affirm "that the use of wine in moderation is not, in itself, inconsistent with the teaching of Scripture." They concluded by appealing to the Assembly to encourage wisdom, charity and self-control in the use of alcohol, but not depriving any member of "those liberties of thought and action guaranteed to him by the Word of God and our Confession of Faith." The stage was set for a defining debate.

The supporters of abstinence cited the history of American Presbyterianism, the "appalling increase in the death rate" due to alcohol abuse, the "deplorable laxity among professing Christians in this county in regard to the essential principles of daily Christian living," and the need for a sparkling Christian testimony before a crooked and perverse generation.

Opponents of abstinence, including faculty members of Westminster Seminary, were not indifferent regarding drunkenness. They recognized the strong temptations toward immoderate alcohol consumption, and the related evils brought about by such behavior.

Yet the responsible use of beverage alcohol is nowhere prohibited by the Word of God. God alone is Lord of the conscience, as the Westminster Confession states. He has left it free from extra-biblical rules imposed by mere men. The moderate use of beverage alcohol is a matter of Christian liberty requiring God-given wisdom. Stonehouse summarized it well when he wrote, "The use which a Christian makes of his right belongs not to the church or to any other person, but only to himself."

Moreover, the Savior commended of the responsible use of alcohol at the wedding of Cana in Galilee, and in the institution of the Lord's Supper. Jesus acknowledged his own consumption of wine when he said in Luke 7:33-34, "For John the Baptist has come eating no bread and drinking no wine, and you say, 'He has a demon.' The Son of Man has come eating and drinking, and you say, 'Look at him! A glutton and a drunkard, a friend of tax collectors and sinners!'"

The moderator of the Assembly, the Rev. John DeWaard, presided over the contentious discussion. According to one of his daughters, DeWaard had been given a pair of socks, knitted by one of the members of his congregation. As he sat through stressful hours of debate on a variety of subjects, he carelessly tugged at a loose thread on one of his socks. Gradually DeWaard unraveled the knitting. His daughter commented, "As to whether the sock actually gave up during the total abstinence debate, who knows. But it makes a good story and that's kind of how Mom told it."

When the vote on the Chicago overture was taken, it lost 24 to 65. This and other developments lead to the departure of numerous ministers and churches, and the formation of the Bible Presbyterian denomination.

Reflecting on this history, Robert Marsden wrote this: "The majority in the church made it clear that they opposed all forms of intemperance and that which would lead to intemperance. Yet they felt that loyalty to Christ forbade their adopting rules or giving advice which went beyond the Word of God. They held dear the biblical doctrine of the adequacy of Scripture to reveal not only what man is to believe concerning God but also what duty God requires of man. They maintained that to add man-made rules to the Scripture was as harmful as to subtract from the Scripture."

So our heritage is this – we oppose all that Scripture calls sin, including the sin of drunkenness. Yet we remain unwilling to add man-made rules to God’s all-sufficient word.