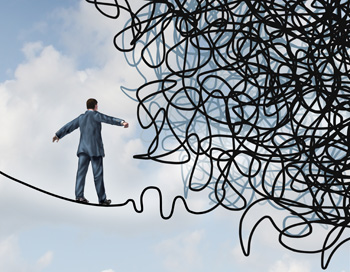 The Heart Divided: When Believers Struggle with Doubt

"I went to my professors with my questions, starting with the easiest questions.… The problem was that they'd had no doubts. They had not asked the questions that I was asking and so of course they could not answer them. They told me I needed to have more faith; I needed to believe; I needed to pray; I needed to give up my questioning, which was a sign of weakness of faith." i

How many Christians experience the same thing in our churches? A question nags at their mind. They want to ask someone. But whom? They are ashamed to raise it with a fellow believer or afraid to go to a church leader. They assume "real" Christians do not struggle with doubts. As their uncertainty persists so does their uneasiness. They are truly caught. They feel so unsettled and desperately want to talk to someone, especially since everything that they have based their life upon now seems so unstable. To make matters worse, they think the church is the last place to raise their doubts. It's the one place they assume they'll find no mercy.

When doubt makes its first appearance in the mind of a believer it can send them into panic. Their fear is that this is unbelief and if they pursue their questions any further, then they will lose their faith. This is an easy mistake to make. But it is a mistake. Doubt is not the same thing as unbelief. Doubt lies suspended half-way on a continuum between faith on one end and unbelief on the other. Unbelief is when we willfully refuse to believe, or we deliberately decide to disobey God. The discussion is over and our heart is closed. Doubt is not like that. It has not made up its mind. By its very nature it is waffling—sometimes for valid reasons. By way of analogy, we can confuse fear for cowardice. Having fear is not the opposite of having courage. Fear is when we find ourselves caught somewhere between courage on the one end and cowardice on the other. By its very nature fear causes us to waver in indecision—sometimes for valid reasons (e.g., in the face of real danger). In the same way we can easily confuse doubt for unbelief. When one man met Jesus he said, "I believe; help my unbelief!” (Mk 9.24). He saw his feeble faith as unbelief. Jesus disagreed. He dealt with the man as someone with weak faith, not without faith. Even faith the size of a mustard seed is still faith.

A second misconception about doubt is that it is always something bad or unwanted. False. Doubt is always serious, but it is not always deadly. In other words we have to measure our doubts in kind. One can underestimate doubt and not take it seriously as a symptom of our faith's unhealthy state. Or, one can overestimate doubt and take it as the initial sign that our faith is in peril and we are bound for apostasy. We can liken it to sitting in a doctor's office and hearing the news that recent tests have detected a growth. One can dismiss the news and assume that it's probably nothing too serious. Or one can panic and assume that the growth is terminal cancer and death is imminent. A more sensible approach would be to listen carefully to what the doctor says about the potential diagnosis, prognosis and treatment options. It is a time to pay attention, not to freak out. It is a time to feel gratitude that it was detected and now you can seek the best course for healing. The reason for taking a similar attitude toward doubt is simple. Those who take their doubts seriously take their faith seriously. A true, saving faith will contend with occasional or regular doubts. Since it is sincere, it sizes up doubt for what it is and addresses its level of threat accordingly. Disregarding our doubts is like the person who neglects a garden that is jam-packed with weeds and vines, and then wonders why it is not bearing fruit. Dismissing our doubts suggests that our faith is too fragile for hard questions and has little intellectual integrity to to deal with serious challenges.

When the Bible talks about doubt it has in mind a faith that is distracted or incomplete because it is worried about God's care (Lk 12.2), or afraid of what it sees (Mt 14.31), or hesitant (Mt 28.17), or afraid (Lk 24.38), or has scruples (Rom 14.23; 1Tim 2.8)—and yet it is a true saving faith. Only those with faith can waver in it. Doubt reflects an attitude in which a person is debating with themselves (Jam 1.6). Doubt must be addressed soberly and immediately, lest it slide further into skepticism. In our day, skepticism is applauded and rewarded with medals for courage—which is odd since a person in two minds has not done anything decisive. They've not committed themselves. Although the Bible does not condemn the doubter, it does not commend the skeptic. Skepticism is doubt sternly turning its face away from the truth, spewing questions, not out of honest inquiry, but out of sport and cynicism. It has lost interest in learning and it tolerates only a few slender rays of light into its dark take on life. Doubt is faith seeking understanding, not turning away from it. Doubt will still listen, even if it's not forever.

Doubt must be taken seriously. Nonetheless it is not necessarily a bad thing. It may even present an opportunity for good. Doubts are often useful. For instance, there are some things we should doubt. The world makes certain claims and promises (i.e., lies) that we ought to doubt. In fact, it is doubt that often leads us to detect these errors. Doubt is a wolf that spots the weak idea, separates it from the herd, nips at its heels and pursues it relentlessly until it is exhausted. This is a good thing in service of the truth. Dogged inquiry can be a form of faithfulness. Some Christians are not nearly as suspicious as they ought to be about what they see and hear—even "scientific" studies should be up for responsible review. The examined faith is not afraid to face hard questions. Johannes Wollebius wrote, "We do not teach that man attains such firmness of faith as never to struggle with doubts, but rather such that he will not yield to doubts in the last resort." ii It has been suggested that faith without any doubt is like a human body without any anti-bodies, which is unable to fend off a virus or infection, because its immune system has no vitality. Similarly, our faith retains its resiliency by being regularly tested. Our faith was never meant to grow like the sheltered plant in a greenhouse. It was to be outdoors, stressed by constant wind and weather so that it grows to be more and more hardy. The Christian who is routinely challenged for their faith, does not panic at various questions or when their convictions are held in dispute. They learn not to run away in fear but to face the challenge and fight. In this way, confronting our doubts can actually help to strengthen our faith— to bring about greater depth, clarity and wisdom. Doubts expose where we are weak and where we need more study, more work, or more prayer. They prepare us for future tests and trials, for deeper questions and longer trials. They humble us as we discover yet another one of our limitations. And when we have clashed with a particular doubt it teaches us how to be more sympathetic and helpful to others, and after escaping "Doubting Castle" (like Christian and Hopeful) we too can post signs to warn other pilgrims. Doubt can be a very good thing.

Doubts come in different forms. Os Guinness says that they arise from ingratitude, faulty views of God, weak theological foundations, lack of commitment, lack of growth, unruly emotions or through deep scars and fears. Gary Habermas believes our doubts are intellectual, emotional or volitional. These two schemes are different, but their main point of agreement is that our doubts are manifold. This is probably contrary to how many Christians think about doubt. I cannot help but think that most of the time we think our doubts are primarily, if not exclusively, intellectual. At the very least I suspect this is more common among Reformed Christians for whom doctrine is so important. My pastoral experience has taught me that the doubts Christians entertain are more often about competing loves or a lack of will-power than questions about the truth. Even those doubts that come masquerading as intellectual inquiry are often more concerned about something else. Many of the current questions dealing with sexual ethics and identity are not really doctrinal in nature, but are generated by a deeper struggle between the demands of God's truth and the demands of the world. They test our backbone more than our brains. Many Christians have never questioned the doctrine of God's providence or his sovereignty; until they are smacked in the face by suffering, tragedy or death. At that point their questions are no longer about whether God is true, but whether God is trustworthy. They are usually not in need of a book on doctrine, but a brother or sister who will listen.

But we shouldn't be surprised by the fact that doubts come in various forms. They simply reflect that our faith is manifold as well. And it is by appreciating the various aspects of faith and its origin in the heart that the path forward will be illuminated. If you want to know more about that, then you'll just have to come back next time.

This article is the first of a two part series, and will be followed by: "The Heart Undivided: How Believers Struggle with Doubt"

i Jayber Crow, Wendell Berry (Washington D.C.: Counterpoint, 2000), 52. Thanks to my daughter Lauren for showing me this quote.

The author freely acknowledges his unabashed, if not shameless dependence upon Os Guinness' Doubt: Faith in Two Minds (Herts, England: InterVarsity Press, 1976), which provided nearly every single good idea (along with illustrations) found in this article and the next.