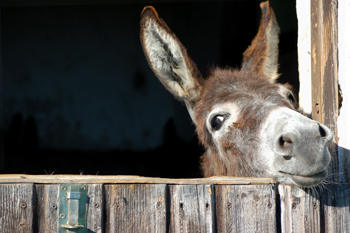 And Mark 11:1-11 begins this last week of Jesus' life, his journey to the cross as he enters Jerusalem, marking what the church has historically celebrated as Palm Sunday. And as he does, there are at least two things we should notice.

First, we should notice Jesus' triumphal entry into Jerusalem. That's the heading of this section in almost every Bible translation. But "triumphal" should really be in quotes. Now, it is triumphal in the grand scheme of God's redemptive plan, but according to kingly entrances of the day it wasn't triumphant at all.

Jesus rides into Jerusalem, but not on a war horse the way an earthly king would, taught his military prowess. He's on a little donkey. Jesus, the Christ, the divine king with authoritative teaching and miraculous power rides into Jerusalem on an animal patently unfit for a king of that day.

Now we know he did it in fulfillment of Zechariah. 9:9: "Rejoice greatly, O daughter of Zion! Shout aloud, O daughter of Jerusalem! Behold your king is coming to you; righteous and having salvation is is he, humble and mounted on a donkey, on a colt, the foal of a donkey." And so it demonstrates that that he is a king. In fact, it demonstrates that he is the king. Yet Jesus doesn't fit into the world's categories of kingship. He brings together in one person, majesty and meekness, infinite power and perfect humility, perfect justice and pure grace, absolute sovereignty and complete submission; he has all sufficiency in himself, but calm dependence on his Father in heaven. He is a king. But he is a king who came to serve and give his life as a ransom for many. He didn't come to wear a crown of gold, but one of thorns. He will not sit on a throne, but hang on a cross so that sinful people might be reconciled to God. This is what makes his entry truly triumphal.

Second, we should notice not only Jesus' "triumphal" entry, but also his enthusiastic reception. As Jesus rides into Jerusalem palm branches and coats are laid down and Ps. 118 is sung, "Hosanna, blessed is he who comes in the name of the Lord! Blessed is the coming kingdom of our Father David! Hosanna in the highest." "Hosanna" is from a Hebrew word that means "Save us," and perhaps even, "Save us, please." According to the Jews, that's what the Messiah as going to do. It's quite the fanfare.

But as quickly as the crowd shouts and praises God, it seems they are gone. Jesus is in the temple and it is late. Jesus looks around at everything and walks right out of the city and back to Bethany from where he had just come. It seems anti-climactic, doesn't it? But in reality it is not. It's really the calm before the storm. Everything from Mark 11:1-11 to the end of chapter 13 is going to center around the temple. Jesus will be in the temple, walking to the temple, or teaching in the temple. You see, Jesus might have ridden in on a donkey instead of a war-horse, but he's about to enter into battle. By the end of the week, the heart and soul of everything the Jewish leaders held dear will become obsolete, and a new center will be established through the death and resurrection of Jesus.

Up until this point, Jesus has been in the habit of telling people not to say anything about who he was, but that's all about to change. The storm is coming. The truth is that most people in Jerusalem were simply unaware that in 40 years the temple would be gone, and that by the end of the week the curtain in the temple would be divinely ripped in two. You see, they weren't really concerned about Jesus. Yes, there would be that crowd that would shout "crucify him", but most would simply ignore him. And that's the great lie, isn't it? That you can simply ignore him. But there is nothing more important in your life than what you believe about Jesus. If he is who he says he is (and he is), he deserves your worship. Even more, you need his salvation. You see, there's a greater storm coming than the one that came the week Jesus entered into Jerusalem because he's coming again to judge the living and the dead. Where will you find yourself then? Will you be singing "Hosanna" with joy? Or will you be crying, "I didn't know the things that made for peace.