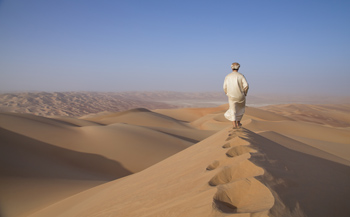 Remaining Steadfast When the Desert Calls

Recently I spent a couple of days at a remote location in the desert. I wasn't doing anything especially impressive, like digging my own wells, sleeping under a cactus, or hunting coyotes for dinner. I was only there to play a couple of rounds of golf on interesting courses, to celebrate completion of a big project. However mundane my purposes, for me being in the desert always triggers thoughts about weighty matters.

The desert is different. For many years, I have been attracted to the desert, with its low humidity, cool nights, and beautiful stark vistas. But I realize that my attraction is somewhat phony. I can drive through the desert on nice roads, eat at restaurants, and sleep in a hotel with air-conditioning and running water. Even the golf courses I played are highly artificial—man-made oases created and sustained with massive amounts of irrigation. Would I find the desert attractive if I was out there truly on my own, without the trappings of modern civilization, especially in the summer when the sun pierces with an intensity that people who haven't been in the desert (Scottsdale in January doesn't count) don't understand? I doubt it.

Many stories in Scripture take place in the desert. It's safe to say that biblical characters and authors did not have the affection for the desert that I have. For the Israelites travelling through the desert after the Exodus, it was a harsh place without food and water—being in the desert made them look back at bondage in Egypt as the good old days, when they at least had plenty to eat (Exod 16:3)! For David, hiding from King Saul, the desert was a place of spiritual deprivation, a wilderness far from the Lord's house where he was tempted to worship false gods (1 Sam 26:19). It was a "dry and weary land, where there is no water" (Ps 63:1)—it sucked the life from body and soul alike.

In light of this dark view of the desert, David's words in Psalm 55:6-8 are remarkable: "Oh, that I had wings like a dove! I would fly away and be at rest; yes, I would wander far away; I would lodge in the wilderness [the desert]; I would hurry to find a shelter from the raging wind and tempest." David longed to get away and find shelter in the desert? Why would he want to go there? The earlier verses of this psalm indicate that David was in great distress, fearing for his very life at the hands of his enemies (55:1-5). And just later he comments on the violence and oppression he's experienced in the city (55:9-11). Thus, we see that things were so bad for David in town that even the inhospitable desert seemed like an attractive refuge. He even wished for wings so that he could fly there at once. David was in despair.

How should we evaluate David's desperate wish? Surely there are times when fleeing from persecution is a wise and godly route. David himself did it when hunted by Saul and by Absalom. But at other times, fleeing is cowardly and a dereliction of duty. Jeremiah once made a wish similar to David's, longing to get away from the wretched people who despised his preaching (Jer 9:2). Yet God had called him to be a prophet and minister to them, and told him not to be afraid (1:5-8). Jeremiah had no liberty to flee to the desert. David himself, in another psalm, responded angrily when people told him to flee like a bird from the wicked: how could he do that, for "in the Lord I take refuge" (Ps 11:1-3)? As king, David could not just abandon God's people when the enemy grew strong.

The situation must have been similar in Psalm 55: David does not in fact flee to the desert but calls on the Lord, fights the battle, and triumphs, for God "is enthroned from of old" (55:16-19). He did not shirk his royal duty and flee to the desert, but fulfilled his calling with God's help. Surely David foreshadows the work of his greater Son, our Lord Jesus Christ. Like David, Jesus knew the physical and spiritual trials of the desert, and he withstood them (Matt 4:1-11). But something much worse awaited him in the city—in Jerusalem—and he felt the urgent desire to escape (Matt 26:35-46). Yet he did not flee, but faced his enemies according to his Father's will, and against all earthly odds triumphed over them—for us and for our salvation.

Late in Psalm 55, David gives an exhortation to his readers: "Cast your burden on the Lord, and he will sustain you; he will never permit the righteous to be moved." There's nothing wrong with taking a little vacation in the desert, and in some circumstances there's nothing wrong with fleeing—to the desert or elsewhere—to avoid persecution. But God calls us to persevere in our callings, even in the midst of severe trial, even when an inhospitable desert seems attractive in comparison. We have a king who stood fast for us and won the victory. He is able to bear our burdens, and no enemy can move us when Christ makes us steadfast.