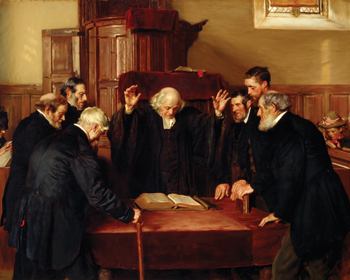 Church of Christ by James Bannerman

The recent publication (2015) of James Bannerman’s Church of Christ by Banner of Truth Trust is noteworthy. It now appears in one volume, to keep the price down, and “English translations have replaced a number of lengthy Latin, German and French quotations … from the [original] 1869 edition.” The subtitle of the book, A Treatise on the Nature, Powers, Ordinances, Discipline and Government of the Christian Church, as such older subtitles tend to, says it all: Bannerman covers the field with both comprehension and conciseness.

Many have more recently come to embrace Reformed soteriology without adopting Presbyterian ecclesiology and polity. It is helpful to have this seminal work readily available. Carl Trueman, in his foreword, while admitting that few will agree with all that Bannerman writes (he calls Bannerman’s advocacy of the Establishment Principle a “pious hope,” reflecting a “now impractical model of church and state”), insists that Bannerman’s lectures are just the tonic to stimulate biblical and historical reflections on the church, beset as it is with the opposition of our post-modern times.

As noted earlier, Bannerman’s subtitle is quite descriptive and furnishes us with the organization of the book. Part I is on the “Nature of the Church,” examining the definition of the church in Scripture; the spirituality of the church; the church both as visible and invisible, catholic and local; the marks and members of the church; as well as the church in its relation to the world and to the state (the last having a number of sections). Part II is on the “Power of the Church,” setting forth the source of church power, as well as its rule, nature, limits, design, and primary subject. Part III addresses “Matters in Regard to which Church Power is Exercised,” in three divisions: in regard to doctrine, ordinances (including sacraments), and discipline. This makes up the bulk of the book (over 400 pages). Part IV is an examination of the “Parties in Whom the Right to Exercise Church Power is Vested,” focusing on the divine appointment of a form of church government and the extraordinary office-bearers of the church, before looking at the various non-Presbyterian systems proposed (the Roman Catholic, Episcopalian and the “Independent,” the latter comprised of both those who favor congregational rule as well as those who oppose connectional accountability).

Bannerman begins by looking at how the Bible defines the church and then proceeds to speak of the church as a divine and spiritual institution. To say that it is divine is to say that its author is God, not man. This would stand over against all sorts of human voluntary societies (not the state, however, which also is of divine origin, though not its particular form, as with the church). That the church is spiritual is to say that it’s not civil (as is the state) or biological (as is the family). It’s the divine institution given to that which pertains to the spirit and is not chiefly political or the like. This insistence on the church as a divine and spiritual institution colors all the rest of the work and may be its genius.

This church is visible and invisible. Insofar as it is the company of those who profess the true religion together with their children, the church is visible. Insofar as it is a spiritual entity, comprised of the elect of all ages, it is invisible. The church, in its essence, is invisible. Bannerman’s discussion of this is quite significant, especially over against the claims of Rome which see the essence of the church as visible (all those in communion with the Bishop of Rome). This church is also catholic (universal in its extent) and local. Both the local and the universal church may be spoken of in the singular.

On the notes (or marks) of the church, Bannerman asserts that there is a distinction between that which makes for the being of the church and that which makes for its well-being. Bannerman argues that the most essential mark of the church is the profession of the true religion—saving faith in Jesus Christ. Rome, however, contents herself in an external and formalized expression of the attributes of the church and does not attend to the heart of the matter, a true profession of saving faith. Rome unchurches all not in communion with her. Bannerman closes this section with a discussion on the relation of the church to the world (as witness) and relationship to the state (from which it is distinct yet by which it is supported). If one wants a reasonable argument for an established Church (one not dependent on nor setting forth some theory of “nations covenanting with God,”) this is the place to go.

Bannerman’s Part II treats the power of the church. The source of church power is the Lord Jesus Christ, not the state (as in the Erastian theory) or the Bishop of Rome (as in the Popish theory). Since Christ is the source, the church’s rule is the Word of Christ, the Bible. This makes church power, then, to be ministerial and declarative (not magisterial and legislative, as Rome has it). The church does not have the power to declare canon law but only to minister and declare the Word of God. The limits of that power are God’s Word. Here is the foundation for true Christian liberty, which is never a liberty to do anything other than please God. The end or design of church power is that the church has all the power it needs to carry out its divinely appointed mission, that of gathering and perfecting the saints. Bannerman argues that the proper subjects of such power are both the office-bearers and the church as a whole as befitted by gifts and circumstances.

The rest of the volume, having established the nature and power of the church, concerns itself with how that power is exercised in doctrine, ordinances, and discipline. As noted this is the bulk of the volume and merits careful attention by all interested readers. Regarding doctrine, the church has the power to declare God’s Word, to agree to what it means and doesn’t mean (this is the power to draft creeds and confessions). Bannerman ably deals with objections to creeds and confessions. Regarding ordinances, church power is exercised in the right and responsibility of the church to make provisions for public worship. Here Bannerman treats the regulative principle (not then called that), the use of liturgies and imposed forms of prayers, the Christian Sabbath and Ecclesiastical Holidays, and then the Christian Ministry, including apostolic succession, ordination, and the independent theory of the ministry (over against the Presbyterian).

In the penultimate section of Part III, Bannerman deals with the Sacraments in general as well as the dominical sacraments of Baptism and the Lord’s Supper, along the way dealing with Romish perversions and infant baptism (and objections to it, together with its efficacy and the matter of modes). Finally, in the last main division of Part III, Bannerman addresses church power as it is exercised in regard to discipline. Bannerman has a good discussion of nature, design, and limits of church discipline. It is for the glory of Christ, the good of the body and the restoration of the offender.

In Part IV, Bannerman examines the parties in whom the right to exercise church power is vested and in the first section argues that Presbyterian church government both locally and connectionally enjoys a divine appointment. God has not left the government of his church to the whims of human convention. And this power is decidedly Presbyterian, not in all the details, but in the principles and outline. The appendices deal with church/state matters, Voluntaryism (the conviction that the church should not be established and supported by the state), the Book of Common Order and more. There are a few disappointments here, chiefly the lack of any sustained discussion of the two or three office question. On balance, however, given its historical understanding, scriptural reasoning and systemic completeness, Bannerman’s considered treatment of the doctrine of the church and its polity is indispensable.