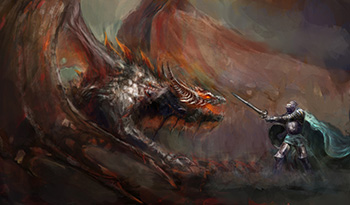 “For Still Our Ancient Foe Doth Seek to Work Us Woe”

John Calvin urged, “We have been forewarned that an enemy relentlessly threatens us, an enemy who is the very embodiment of rash boldness, of military prowess, of crafty wiles, of untiring zeal and haste, of every conceivable weapon and of skill in the science of warfare. We must, then, bend our every effort to this goal: that we should not let ourselves be overwhelmed by carelessness or faintheartedness, but, on the contrary, with courage rekindled stand our ground in combat.”

The place to begin in preparing to stand against Satan and his hosts is with a knowledge of Satan himself, in both his strengths and weaknesses. And the place to begin knowing about Satan is with the fact that he is both real and personal.

The Devil Is Real and Personal

He is real in that he is not a figment of the human imagination. He is personal in that he is not merely some vague embodiment of evil. Jesus bore witness to these truths when he referred to the devil by name (Matt. 4:10; 16:23; Luke 22:3) and when he overcame him at the time of his temptation in the wilderness (Matt. 4:1-11).

The idea of a personal devil has been denied by large segments of the Christian church and to some has become almost a laughing matter. Because of the revival of witchcraft and Satanism in recent years, it is perhaps not so much a laughing matter as before. Still, many would regard thoughts about the existence of a real devil as hardly serious. To the popular mind, the devil is a funny creature in red underwear with horns and a tail. That is not at all the image of Satan portrayed in the Bible.

The apostle Paul noted that we are not ignorant of Satan’s “devices” (2 Cor. 2:11 KJV). The word device means “a trick, plot, scheme, contrivance, or stratagem.” So the point is that Christians know, or should know, about Satan’s tricks for seeking to blind people’s minds and secure them for himself. One of these, which he uses at some points of history, is to make people believe that he does not exist.

Since the devil of fiction is so unbelievable, it is no wonder that millions discount him. But that is a mistake. According to Jesus, there is a devil, and there are those who follow him. In fact, he warned his disciples to pray, “And lead us not into temptation, but deliver us from [the evil one]” (Matt. 6:13).

The Devil Is Fallen

The devil is also a fallen being, as Jesus taught in John 8:44. Jesus showed the height from which Satan fell (he “has nothing to do with the truth”) and the depths to which he descended (“he is a liar and the father of lies,” and “he was a murderer from the beginning”). Jesus also said, “I saw Satan fall like lightning from heaven” (Luke 10:18).

This point too is often rejected by men and women, even if they believe in a devil. Thus, rather than believing that Satan is a depraved form of what he once was, they prefer to think of him as heroic and, more or less, as the champion of fallen man. John Milton, though he did not glorify Satan, nevertheless contributed to that idea. Although it is true that in the opening pages of his great epic, Paradise Lost, Milton does describe the fall of Satan from heaven and later anticipates his final judgment, it is also true that the greater part of the first book of the epic describes Lucifer’s heroic efforts to rise from the depths of hell and make something of his supposed new kingdom. Milton does this so brilliantly that it is possible to sympathize with Satan. We receive quite a different impression from Scripture.

To begin with, Satan has never been in hell and does not control hell. The Bible tells us that God has created hell, preparing it in part for the devil and his angels, and that Satan will one day end up there.

The Bible also describes Satan as at one time being “full of wisdom and perfect in beauty.” It says that he was once “in Eden, the garden of God,” that he was “blameless” in all his ways from the day he was created, until “iniquity” was found in him (Ezek. 28:12-15).

In Isaiah we are told of Satan’s fall through pride, which expressed itself as an arrogant desire to replace God. Satan says, “I will ascend to heaven; above the stars of God I will set my throne on high; I will sit on the mount of assembly in the far north; I will ascend above the heights of the clouds, I will make myself like the Most High.” God replies that, as a result of his sin, he will actually be “brought down to Sheol, to the depths of the Pit” (Isa. 14:13-15). This is not the portrait of a heroic being, but of a fallen being. It is a being from whom a person should turn in horror.

Satan has wrought havoc on the human race. He is a murderer and the author of murder, as Jesus told his listeners. The first crime following the fall of Adam and Eve was a murder; as a result of the Fall, Cain murdered his brother. We also read that Satan entered into Judas to betray Christ into the hands of his enemies so that they might kill him (John 13:2). Satan’s history is written in blood.

It is also written in deceit, for he is a liar, as Christ said. Satan lied to Eve—”You will not die” (Gen. 3:4). But she did die. In 1 Kings we read that lying spirits (presumably demons) went forth into the prophets of Ahab so that he would go into battle against the Syrians and fall at Ramoth-gilead (1 Kings 22:21-23). In Acts we are told that Satan entered into Ananias to cause him to lie about the price of his property, as a result of which he died (Acts 5:3). Satan lies today. Consequently, we are to regard him as dangerous, deceitful, and malicious, but above all as a sinner and a failure. He sinned when he failed to remain in his high calling.

The Devil Is Limited

Satan is not omniscient. God knows all things, but Satan does not. Above all, he does not know the future. No doubt Satan can make shrewd guesses, for he knows human nature and the tendencies of history. The so-called revelations of mediums and fortune-tellers—when they are not outright deceits—fall into this category. But they do not give true knowledge of what is to come. Thus, the predictions are vague and generally do not hold water. At one point, God stated this in the form of a challenge to all false gods, saying, “Set forth your case, says the Lord; bring your proofs, says the King of Jacob. Let them bring them, and tell us what is to happen.... Tell us what is to come hereafter, that we may know that you are gods; do good, or do harm, that we may be dismayed and terrified. Behold, you are nothing, and your work is nought; an abomination is he who chooses you” (Isa. 41:21-24).

Neither is Satan omnipotent. Thus, he cannot do everything he wants to do, and, in the case of believers especially, he can do only what God will permit. The best-known example is Job, who was safe until God had first lowered the hedge he had thrown up around him. Even so, God had his own worthwhile purposes and kept Job from sinning.

Satan is not omnipresent, which means that he cannot be everywhere at the same time tempting everybody. God is omnipresent. He can help all who call upon him, all at one time. But Satan must tempt one individual at a time or else operate through one or more of those angels, now demons, who fell with him.

Although Christians must never ignore or underestimate Satan and his stratagems, neither must they overestimate him. Above all, they must never concentrate on Satan to the point of taking their eyes away from God. God is our strength and our tower. He limits Satan. God will never permit Christian to be tempted above what we are able to bear, and he will always provide the way of escape that we may be able to bear it (1 Cor. 10:13). As for Satan, his end is the lake of fire (Matt. 25:41).

The late James Montgomery Boice was senior pastor of Tenth Presbyterian Church (PCA) in Philadelphia, Pa., and the author of numerous books. This article is excerpted and slightly condensed from Foundations of the Christian Faith (IVP, 1986). Unless otherwise indicated, the author cites the RSV. Reprinted from New Horizons, October 2002.