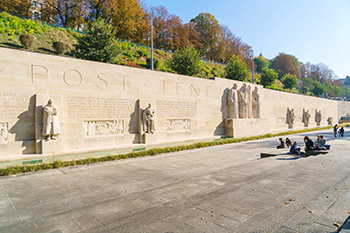 October 31, 1517, is a day that remains green in the memory of all who cherish the Protestant Reformation. On that day, in the full light of noon, Martin Luther nailed his ninety-five theses on the subject of indulgences to the door of the castle-church at Wittenberg, and thus set in motion the forces which made the Reformation a reality.

In our judgment the custom observed by many Protestant groups of recalling this day year after year is a good one. And in a day when the principles of the Reformation are being largely forgotten or ignored or compromised or trampled under foot, even in nominally Protestant Christendom, there would seem to be special urgency in bringing it frequently to mind. If its celebration can serve as an occasion to dedicate ourselves anew to the proclamation and application of the high principles which brought about a new day of light and liberty, we shall be greatly rewarded indeed.

We have been accustomed to sum up the great Reformation principles, in rather academic terms, as the formal and material principles of Protestantism. These terms, though somewhat forbidding, serve to bring to mind truly glorious and world-shaking truths: the truths concerning the authority of the Word of God and concerning the gospel of the grace of God.

The first of these principles asserts that the right of Christ, and of Christ alone, to rule His church must be taken with full earnestness. No human word may be set above or alongside of the Word of Christ. To His Word must be yielded full allegiance and complete submission. No word of pope or bishop or presbyter, no deliverance of council or assembly or session may stand on its own authority. There is in truth an exercise of the authority of Christ in the church through fallible men and erring councils, but such exercise of authority is valid only as it derives from Christ Himself as He speaks in and through His Word.

One significant form in which this principle has found expression is in the qualitative distinction drawn between Scripture and tradition. This distinction is not one of mere degree. It rests on the judgment that Scripture possesses divine authority, whereas tradition comes to us as the product of human opinion and judgment.

Now to be sure, the Protestant also has a high view of tradition because of his Christian view of history. No one can ignore history or isolate himself from it. No generation can make a completely new start. As someone has said, while there is no obligation to reckon with tradition, there is a necessity of doing so. And the traditions of the church are worthy of special esteem, the more so as they may be recognized as coming into being through the influences of the Scriptures.

In spite of such evaluations of tradition, however, we must insist that a Protestant can never be a mere traditionalist. He must declare his freedom from the authority of tradition with the same breath that he asserts his submission to the Word of God. In the year 1944, then, we are true to our Protestant heritage to the extent that we avoid traditionalism and take our stand solely upon the dictates of the Word.

A moment's thought shows that this estimate of tradition is of the highest conceivable practical significance for us in our everyday life. The Christian in his reflections on his doctrine and his morals, ecclesiastical leaders in planning the future program of the church, Christian parents in considering the education of their children, the Christian scientist in his approach to his special problems - all these may never treat tradition as a final court of appeal. Rather their recourse must be to Scripture as the infallible rule of faith and life.

The second great Reformation principle concerns the way of salvation and usually is summed up as the doctrine of justification by faith alone. It was recognized that the gospel of the grace of God had been tragically obscured and even obliterated by a doctrine of good works. At all costs the gospel of the grace of God in all of its purity had to be proclaimed. Since the gospel was God's wisdom and God's power, no admixture of error might be countenanced for a moment.

And it was this very devotion to the purity of the Christian message that brought about disruption in Protestantism. Those of Reformed, Lutheran and Arminian persuasion went their separate ways because they were convinced that to accept the views of the others would be to compromise the gospel and so to be disloyal to Christ. Those of Reformed persuasion in particular held that the gospel of the grace of God was maintained adequately and God was given all the glory only if the consistent particularism, which has been summed up in the famous five points of Calvinism, was recognized as essential to the Christian message.

This conception of the Christian message finds happy expression in the report of the Committee on Local Evangelism to the Tenth General Assembly of The Orthodox Presbyterian Church, in the section entitled, "The Message of Evangelism". Consider, for example, this paragraph:

“The message of evangelism is the whole counsel of God as revealed in His Word, the Scriptures of the Old and New Testaments. Too often this commonplace statement is not accepted or, if accepted, not appreciated or followed. The cause of evangelism has been greatly prejudiced and hindered by the supposition, far too prevalent, that for the lost the message has to be restricted to the central elements of the gospel, namely, sin, redemption by the blood of Christ, and the demand for faith and repentance. It is true that evangelism should always keep in the forefront of its message the central and elementary principles of the gospel. But two facts must be borne in mind. (1) The Scripture pattern will not support the conclusion that the central message of the gospel is the exclusive content of the message of evangelism and (2) the central message itself cannot properly be presented or understood except as it is presented in the context of the whole counsel of God.”

How frequent in our day are the attempts to throw overboard such a distinctive view of the Christian message in the interest of church union or cooperation on a wide front! Sometimes this is done on a purely pragmatic basis, setting aside the claims of truth altogether. Or it may be maintained that the differences among evangelicals are so trivial and minor that they may well be ignored for the sake of a united program. Or it may be asserted that we should seek to cooperate even with non-Reformed groups in a program of evangelism which will bring men into the kingdom, allowing that later on divergent and distinctive. programs of education may be carried on in the several church groups. These several approaches are by no means equally in error. Yet all coincide in their readiness to say that at certain points, if not all along the line, certain convictions as to the truth of the gospel may be kept in reserve.

The gospel, however, will not resolve itself into essential and nonessential elements. Nor is it a burden to the gospel for it to be set forth in the light of the full counsel of God. Those who are in deep ignorance need indeed to have their thoughts focused upon the central and elementary principles of the gospel, but their apprehension of the gospel will, not be hastened if some emasculated or attenuated form of the gospel is proclaimed. Only the full-orbed radiance of the Word is calculated to dispel the darkness of human ignorance and confusion. Our principles are then not diverse but one. Our submission is only to God. Our reliance is wholly upon God. Our message is God's message.