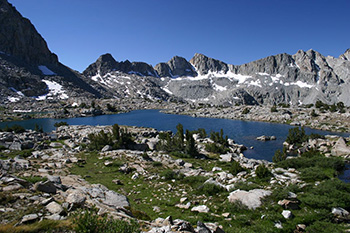 Fortieth Annual Backpacking Adventure: Mountains and Why We Still Love Them

Eighty-seven years ago J. Gresham Machen gave a lecture entitled "Mountains and Why We Love Them" to a group of ministers in Philadelphia. In it he spoke of his lifelong love of mountains, whether it be the European Alps or the White Mountains of New England closer to home. He wanted that love to be cultivated even among his ministerial listeners. He said, "If you are to learn to love mountains, you must go up them by your own power." Nine decades later Machen's Orthodox Presbyterian offspring are still learning to love mountains.

One of the ways that this love is cultivated is through the mountain hiking adventures in the Sierra Nevada sponsored by the Presbytery of Southern California. In 1980 Ruling Elder Mac Laurie, now in his nineties, suggested taking high schoolers and collegians out of the city and into the Sierran wilderness that forms the backbone of California. "Get them out of their comfort zone, get them away from the lights, the TV, the amenities, the music, the culture," Mac said. "Get them deep into the 'book' of general revelation where they can see and hear its voice in a new, fresh, and overpowering way! And you might be able to do some serious ministry with our presbytery’s young people." Mac was speaking to a young couple (David and Susan Winslow) whom he mentored into four decades of assisting with this ministry to OPC young people from around the whole church.

Over the years, Machen's circle of ministerial descendants who have helped to lead these hikes has included Tony Curto, Ralph English, Charlie Dennison, Danny Olinger, Mark Mueller, Mark Jenkins, John Fesko, John Shaw, Jesse Pirschel, Josh Lyon, and Zach Keele. Most of these men led more than one hike, but Rev. Olinger deserves special mention as one who led four expeditions over a span twenty years before putting away his boots. Machen would have smiled and welcomed all these men into his fraternity of mountain men. The mountains provided these pastors a backdrop for ministering the Word of God while the heavens above spoke back in antiphonal voices just as the psalmist promised.

So why do we love mountains? Drinking in their grandeur with eyes transformed by the Spirit we declare how great God is. We are not content to love mountains until we fully love their Creator. The mountain peaks belong to God. They belong to Christ the King. And from their tops we gain new perspective on the activities of men, those little grasshoppers down below, along the highways and in the towns of "civilization." We are so small and insignificant. When we find ourselves on top, we shiver with both fear and delight. Our lips are filled with prayer and praise. Indeed, "How Great Thou Art!"

Hiking in Machen's footsteps in 2020. A new generation of expedition leaders has arisen for the OPC Backpacking Adventures. Thomas Jennings and Eli Hirtzel together with Pastor Jeff Wilson and Pastor Zach Keele can help you cultivate a Machen-like love of mountains on one of two Sierran hikes being offered for July and August. If you are fifteen to twenty-fiveish, in good shape, and a team player willing to share one another’s burden, get in touch with Thomas Jennings immediately. These are standing-room-only events.