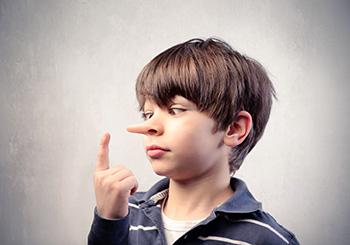 James writes with great vividness about the tongue in the third chapter of his epistle. Strikingly, vigorously, he condemns the abuse of that powerful member of the body. Of course, he does not look upon the tongue as evil in itself, as something morally wrong. He would recognize the truth of our Lord's saying, "But those things which proceed out of the mouth come forth from the heart; and they defile the man. For out of the heart proceed evil thoughts, murders, adulteries, fornications, thefts, false witness, blasphemies: These are the things which defile a man... ." (Matt. 1 5:18-20.) Truly, if we were perfect within, our tongues would never be given to evil; out of the same mouth would not proceed praise to our Father in heaven and words that savor of the father of lies. The fault that James attacks resides not in the tongue itself, but in the evil within us, in the old nature, which notably and mightily expresses itself through the tongue.

When we consider how prone we are to commit sins of the tongue, how influential such sins are, and with what great difficulty conquest is obtained over them, we should realize why James speaks of the abuse of the tongue in the emphatic way that he does. And we should be impelled by James' teaching to seek the mastery of our old nature, to employ diligently the means of grace that God has provided, and with strength from above to honor our Lord in all our utterances.

There is, of course, a proper use of the tongue. We should devote it to the blessing or praise of God. The glory of our perfect Creator and Redeemer should be its constant theme. And it should conform to all of the particular requirements for our speech made by the whole moral law of God. We shall largely confine our attention, in our present brief study, to one of these particular requirements – that of speaking the truth.

In the first place men should speak the truth about God. They should confess the truth that He has revealed. They should witness to His name, to all the means by which He makes Himself known, and testify to the relationship of all fields of human experience and endeavor to Him. They should maintain that the only true interpretation of any fact is God's interpretation, and should strive in whatever they say about any matter to glorify the living and true God, the source of all light and understanding.

In the second place, men should speak the truth about themselves and their neighbors. The tongue should be used in "the maintaining and promoting of truth between man and man, and of our own and our neighbor's good name" (Shorter Catechism, Question 77). Those who are born of the Spirit of truth, who are united with Him who is truth, should with the utmost diligence labor to achieve complete truthfulness in their statements concerning themselves and others.

The Christian should measure himself by the perfect standards given in the Word of God. He should not portray himself as better than he is. Nor should he portray himself as worse than he is. No false estimate ought to be made of the magnitude of the divine work of grace performed in him. Indeed, at times he may even have to rise to his defense against maligners and calumniators, against the attacks of Satan and his servants.

Similarly the believer should attempt to speak with perfect truth about his neighbor. He ought to seek for a genuine understanding of other men, whether they are believers or unbelievers; he should take account both of God's special grace and of His common grace as granted to men, and should endeavor to honor the facts about others in whatever he may be called upon to say with regard to them. In obedience to the ninth commandment, we ought to apply ourselves to such duties as "the preserving and promoting of truth between man and man, and the good name of our neighbor, as well as our own: appearing and standing for the truth; and from the heart, sincerely, freely, clearly, and fully, speaking the truth, and only the truth, in matters of judgment and justice, and in all other things whatsoever: a charitable esteem of our neighbors: loving, desiring, and rejoicing in their good name; sorrowing for, and covering of their infirmities; freely acknowledging of their gifts and graces; defending their innocency...." (Larger Catechism, Question 144.)

The Bible not only tells us what we are to speak; it tells us also what we are not to speak. It not only commands certain duties; it also forbids certain sins. Now obviously what it would forbid, in the sphere of conduct with which we are particularly dealing, is untruth. If we were to place a negative before the positive requirements in the realm of truth which we have already considered, we should obtain a list of corresponding sins which the Bible prohibits.

The name of God, all that by which God makes Himself known, must not be taken vainly or for vanity. We must not swear falsely. We ought never to take an oath before God in support of falsehood. We should be fully persuaded in our own minds of the accuracy of the statements to which we swear, and should never, except in complete sincerity, call on the Lord our God by way of attesting veracity. Vows ought to be made only to do things acceptable to God; should be directed to our spiritual upbuilding; and ought to be taken willingly, thoughtfully, reverently, and with full intention to perform them. Forbidden to us are blasphemy; attacks on God and His Word; hollow, formal references to God and His revelation; hypocritical confessions of faith; the attribution to false gods of the glory due to God alone; and any failure to express due reverential recognition of the name of God wherever the Most High makes Himself known.

Likewise, in our relationships with our neighbor we are to shun all falsehood. We are manifestly not to bear false witness against ourselves or others in court. But we are not to deal deceitfully in any of the manifold activities to which the ninth commandment is applicable. It would be profitable for us to examine ourselves in the light of the detailed list of sins mentioned by the Larger Catechism – as forbidden in the ninth commandment:

" ... all prejudicing of the truth, and the good name of our neighbors as well as our own, especially in public judicature; giving false evidence, suborning false witnesses; wittingly appearing and pleading for an evil cause; outfacing and overbearing the truth; passing unjust sentence: calling evil good, and good evil; rewarding the wicked according to the work of the righteous, and the righteous according to the work of the wicked; forgery; concealing the truth; undue silence in a just cause, and holding our peace when iniquity calleth for either a reproof from ourselves, or complaint to others; speaking the truth unseasonably, or maliciously to a wrong end, or perverting it to a wrong meaning, or in doubtful and equivocal expression, to the prejudice of truth or justice; speaking untruth; lying; slandering; backbiting; detracting; tale-bearing; whispering; scoffing; reviling; rash, harsh, and partial censuring; misconstructing intentions, words, and actions; flattery; vainglorious boasting; thinking or speaking too highly or too meanly of ourselves Or others; denying the gifts and graces of God; aggravating smaller faults; hiding, excusing, or extenuating of sins, when called to a free confession; unnecessarily discovering of infirmities; raising false rumors; receiving and countenancing evil reports, and stopping our ears against just defense; evil suspicion; envying or grieving at the deserved credit of any, endeavoring or desiring to impair it, rejoicing in their disgrace and infamy; scornful contempt; fond admiration; breach of lawful promises; neglecting such things as are of good report; and practicing or not avoiding ourselves, or not hindering what we can in others, such things as procure an ill name." (Larger Catechism, Question 145.)

We shall not be able to deal with all the particular sins of speech and heart mentioned by the Larger Catechism in the answer just quoted, but we shall give special attention to just one or two. It is not ours to spread harmful, false tales about others, to give encouragement and currency to erroneous reports about our neighbors, or to engage in slander, backbiting, or unjust criticism. Many conversations are enlivened by malicious gossip, by reflections on the characters of others, which may cause untold grief and harm to their victims. Christians should have nothing to do with unsubstantiated, adverse judgments on others and should not traffic in cruel, uncharitable criticism. We should abhor, we should loathe, the evil of doing any injustice to the name of another by some utterance of ours.

Another sin of the tongue, scrupulously to be avoided, is the betrayal of confidences. We are not at all warranted in revealing certain information that others may have entrusted to us and legitimately have expected us not to disclose. People should be able to come to us with their problems, knowing that whatever they tell us confidentially (and which conscience does not require us to make known) will not be publicized.

If we really love God and love our neighbor as ourselves, we will speak the truth regarding God, ourselves and others, and depart from the abomination of the lie. And if we have the proper love in our hearts, if evil does not rule us, if rebellion against God, envy, pride, hate and covetousness do not control us, we will seek to obey all the requirements of the whole law of God with regard to the use of the tongue. Let us resolve to give ourselves to the praise of our all-glorious God and to speak, in our Redeemer's name, words of light, of truth, of comfort, and of charity. Oh that all our words may be prompted by love, may conform to the perfect divine law, and may declare the supreme excellency of the name of our triune God!