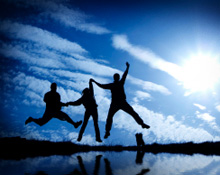 On the sixth day, God contemplated his finished creation in its vast splendor and saw that it was "very good" (Gen. 1:31). But he did not yet see the "very best." That was because even before he created, God had decreed that "the best of all possible worlds" was not to be at the beginning, but rather at the end of history. That, too, was why he made Adam and Eve to be his image bearers—to give them the privilege and responsibility, unique among his creatures, of working for their Creator-Lord and so to bring the creation to its intended consummation.

Our first parents, however, proved to be unfaithful and unprofitable servants, and the rest is history—the sad, calamitous history of human sinfulness and God's just wrath and curse on that sin. "But where sin increased, grace increased all the more" (Rom. 5:20). In his wrath, God did remember mercy (Hab. 3:2). God purposed, despite sin, not to abandon the creation. He purposed to save a people for himself. He sent his own, only begotten Son to be the new, "last Adam" (1 Cor. 15:45, 47). By his life, death, resurrection, and ascension he has not only canceled out the punishment we sinners deserve, but has also secured the realization of God's original purposes for the entire creation. As "head over everything for the church" (Eph. 1:22), he is presently working, by his Spirit, for the full realization of those purposes at his return. Then, as he surveys the new heavens and the new earth in their final, unshakable perfection (Heb. 12:26-28), he will in fact see the "very best."

What, you may be wondering, does all this have to do with the Sabbath? "Much in every way" (to borrow from Romans 3:2). Certainly in the book of Hebrews, for example, God makes it clear that he would have us appreciate the deep tie between the comprehensive scope of the Christian religion just outlined and our weekly keeping of the Lord's Day. In the long passage Hebrews 3:7-4:13, he is intent on giving New Testament Christians a sense of their basic identity: they are sojourners; the church is a pilgrim people. He makes his point, in commenting on Psalm 95:7-11, by comparing the church to Israel in the wilderness. That analogy has two sides. On the one hand, just as Israel had been set free from slavery in Egypt, so believers have already been released from the guilt and power of sin. But, on the other hand, just as Israel in Sinai had not yet entered the land of Canaan, so we have not yet attained our salvation in its final fullness. An unthreatened, unchallenged (but not uncertain!) experience of salvation is still future for the church. This is why there are so many pronounced exhortations to persevere, not only in this passage, but throughout Hebrews.

God calls this future possession of salvation "rest" or "my rest," picked up from Psalm 95 (see Heb. 3:11, 18; 4:1, 3, 5, 10, 11). Moreover, he explicitly associates the Sabbath with that rest. That happens in two ways. First, in Hebrews 4:4, he connects that rest with Genesis 2:2 ("So on the seventh day he rested from all his work"). This is the only place where the New Testament quotes this verse. It is also significant that there are only two places where the Old Testament quotes this verse, and they both function to support the weekly Sabbath commandment (Ex. 20:11; 31:17). Second, in Hebrews 4:9, he deliberately calls the rest "a Sabbath-rest" (or "Sabbath keeping").

The intent of this inspired commentary on the Old Testament should be clear enough. God wants us to view the final rest—the consummation order in store for God's redeemed children—as one grand, unending sabbath-rest. That suggests that the Sabbath day is an eschatological sign. In other words, our weekly Sabbath-rest is a recurring pointer to that consummation. Weekly Sabbath keeping is a sign that points to the end of history and to the ultimate fulfillment of all God's purposes for his creation.

To see the Sabbath in this light has significant implications not only for our attitude toward the Lord's Day, but also for how we view ourselves and all of our activities as God's servants. The weekly Sabbath is not just God's provision so that we might have time to worship him (although it certainly is that). The rest itself—ceasing as much as possible from those activities that are appropriate on the other six days of the week—has positive meaning. The Lord's Day is about worship because it is first of all about the gospel. It is a sign, a witness both to the church and to the watching world, that "you are not your own" (1 Cor. 6:19). We are depending on God, not on ourselves, to provide for us. It is a sign that we do not trust in ourselves and our own efforts as fallen sons and daughters of Adam. We trust in the perfect righteousness of Christ, the last Adam. We trust in God's faithfulness to his covenant promises to do for us what we are unable to do for ourselves.

We obscure the meaning of the Lord's Day if we detach it from the other six days of the week. The weekly cycle—which structures human existence in virtually every time and place—itself provides a kind of "philosophy of history." The pattern of six days of activity interrupted by one day of rest is a continuing reminder that human beings are not caught up in a meaningless flow of days, one after the other without end. History has a beginning and an ending. We are heading toward final judgment and the consummation of all things. Every time we remember the Sabbath day to keep it holy, it encourages us to "think big." It reminds us of the truly large picture we are part of as God's redeemed children. The weekly Sabbath is a God-given sign that our lives are not meaningless and without purpose. Every time we neglect to consecrate the Sabbath day to God, we actually steal hope from ourselves. Every time we fail to keep the day holy to God, we actually obscure our witness to the world of hope in Christ. Every Sabbath day is a gracious reminder that our "labor in the Lord is not in vain" (1 Cor. 15:58).

The Sabbath is now the Lord's Day. The Sabbath Day has moved from the end to the beginning of the week. Our great privilege under the New Covenant is to start each week with the Sabbath. That's a sign—because of Jesus' resurrection on the first day of the week—not only that the new creation is "ready to be revealed in the last time" (1 Pet. 1:5), but also that our Lord Jesus Christ has actually already begun the new creation. Because we still look forward to the future consummation, when we will enter God's rest in perfection, we continue to have a weekly Sabbath in the New Testament. Because in Jesus Christ we have already entered God's rest in principle, we begin the week with the Sabbath. We already possess "the promised Holy Spirit, who is a deposit guaranteeing our inheritance" (Eph. 1:14). The Lord's Day is a weekly sign that salvation is not just a future hope, but a present possession.

In a world increasingly without God and without hope, our weekly Sabbath keeping is a voiceless, but nonetheless eloquent and powerful witness—a sign of hope—the hope, God reassures us, which "does not disappoint" (Rom. 5:5).

The author, an OP minister, serves as professor of systematic theology at Westminster Theological Seminary in Philadelphia. He is the author of Resurrection and Redemption and Calvin's Doctrine of the Sabbath. Reprinted from New Horizons, March 2003.