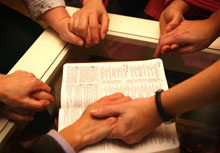 A Special Season of Prayer

Greetings in the name of our Lord Jesus Christ, who is the Head and Savior of His Church. This is Danny Olinger, Mark Bube, and Ross Graham reporting for this special combined edition of Home Missions Today and Telenews. Earlier this year, we wrote you about the serious financial situation facing the Worldwide Outreach ministries of Christian Education, Foreign Missions, and Home Missions in the Orthodox Presbyterian Church. And this past summer, even as our Lord was already beginning to answer our prayers, the general assembly requested the presbyteries and sessions of the OPC “to call the congregations and mission works together on Sunday, September 13, 2009, for a special season of prayer for the ministries of Worldwide Outreach, especially beseeching our Lord to supply the resources necessary to carry on the ministries He has entrusted to His Church.” Now, as we look at the Worldwide Outreach giving figures through August 2009, we are again humbled by our Lord’s mercies to us through the generous and sacrificial giving of His people, and we want to express again our thanks to all those who have indeed given themselves to the Lord and to His work.

Over the next four weeks, all three of the Worldwide Outreach ministry committees will be meeting to consider whether it might be possible to resume the ministries that each committee had to put on hold this past February, when the full extent of the impact of the economic downturn on each of the committees’ work became apparent. Following is a list of a few items for prayer that you might find helpful as you gather for this special season of prayer.

The Committee on Home Missions and Church Extension, which meets on September 15–16, asks us to pray that:

The Committee on Foreign Missions, which meets on September 22–23, asks us to pray that:

The Committee on Christian Education, which meets on October 5–7, asks us to pray that:

A PDF version of this special edition of Telenews is also available.