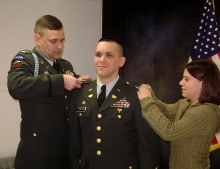 Serving the Lord as Chaplains

The hardest experience Orthodox Presbyterian pastor Douglas Withington had to handle as a Navy Reserve chaplain in Iraq was the suicides. It wasn't only the trauma of seeing the remains, said the pastor of Pilgrim OPC in Raleigh, N.C. "It was difficult to try to bring comfort to close friends and supervisors." Withington is one of about 28 OP ministers who serve as chaplains. Currently, the OP has 13 active duty chaplains with the Army, Navy, and Air Force; a Reservist chaplain recently returned home from Iraq and another to deploy soon; 5 other Reservists, and 8 OP chaplains serving police and sheriff departments, hospitals, prisons, and retirement communities, said Robert Coie, an OP elder and secretary of the OPC Committee on Chaplains and Military Personnel.

The Chaplains Committee also serves all military personnel including grunts, Special Forces, doctors, JAG officers, and others who been deployed multiple times in war zones.

As an ordained OP minister, the military chaplain's goal is to provide a biblical, faithful, pastoral ministry to the personnel of the particular military service to which they are commissioned, said Robert Needham, pastor of New Hope OPC in Hanford, Calif., and chairman of the Chaplains Committee.Typically they preach once on Sunday, hold Bible studies, provide counseling to service members and their families, assist with family crises, and visit the troops on the front line and in their work spaces, whether they are at sea, deployed, or stationed at camp or base, said Needham.

Withington completes his year and three month mobilization this month. Although the combat environment in Iraq was calmer than in the past, his base received four rocket attacks, but very few combat fatalities overall. "It was extremely rewarding to be able to preach Christ, conduct Bible studies and counsel with Marines and sailors from the Scriptures," he said. "I even did some long distance marriage counseling with spouses back in the States."

One of Withington's right hand men, Captain Chris Jones, ran off a copy of the Westminster Standards (with proof texts) from the OPC website for a young Navy CB who wanted to know more about the Reformed Faith. Withington often joined them as they discussed chapters on Sunday afternoons. Chaplains work long hours, often in dangerous situations, even if not in a combat zone. As a retired Navy chaplain, Needham remembers coming back from a six-month deployment on a destroyer and being transferred mid-air by a helicopter. He was hanging on to a "horse collar" personnel sling with his arms dangling one hundred feet above the fantail of a ship when the cable got stuck in the helicopter tires. He hung there 45 minutes before he was successfully transferred.

"A chaplain can face dangers in riding in military equipment, or from theologically liberal senior chaplains who resent effective, godly men who sincerely believe the Bible is God's Holy Word," said Needham. "A chaplain can face the danger of jealousy from fellow chaplains, from combat hazards, or the danger of problems in his own family due to his long absences away from home."

One OP chaplain, previously assaulted with a knife in a combat zone, was given the name "Battlechaps" because he persisted in caring for Marines by crawling from fighting hole to fighting hole in the midst of combat to bring the words of Christ, said Coie. Sometimes troops in the garrison also are not free from harm, such as the recent terrorist attack at Fort Hood, said Coie. "They all need constant prayer that God will keep them in the hollow of his hand and steel them for the fight."

To accomplish this goal, chaplains rely on prayer, diligent study of Scripture, and investing time and effort into those they serve. "Being effective means hard work," said Needham. "A chaplain who stays in his office and expects the troops to come to him is rarely effective, as opposed to the chaplain who regularly makes the rounds of his people, even on the battle line, or on the midnight to 0400 watch, or the lonely outpost. And praying often for those he serves is vital to a God-blessed ministry, both in his prayer closet, and with them in person, such as praying with soldiers just before they set out on patrol."

That's where the prayers of the people in the pews are vital. In the New Horizons Prayer Calendar, a handful of chaplains are listed for prayer each month. Coie publishes an online monthly, A Plea for Prayer, with regular updates on the chaplains and a listing of all non-chaplain OPC enlisted men and women and officers. (Contact Coie at RMCoie@aol.com). Needham suggests praying earnestly for the chaplain's needs and ministry with petitions, such as that: Remembering the family at home is vital because the mother has to manage the children by herself at the same time she is concerned about her husband and sometimes feels abandoned by him, said Needham. "We should pray that congregations will exercise particular care in ministering to the families of deployed service members, such as godly men in the congregation taking time to do some activity with the male children who are missing the friendship and example of their father," said Needham.

"We will be discovering the Lord's answers for years to come," said Withington. "But I'm already giving thanks for whoever prayed that I would have the close companionship of brothers in Christ who would help me in my ministry. I also give thanks for those who prayed for my wife, Sharon, and for Pilgrim Church in my absence."

Church members also can help the chaplains and those serving overseas by writing letters of encouragement and sending small care packages with personal hygiene items and small treats, such as pictures and non-perishable candy, said Needham.

"It is a precious lot who serve to preserve our freedom and our ability to freely proclaim the Gospel of Christ," said Coie.