Back home again in Sendai, Cal Cummings wrote a few hours ago: 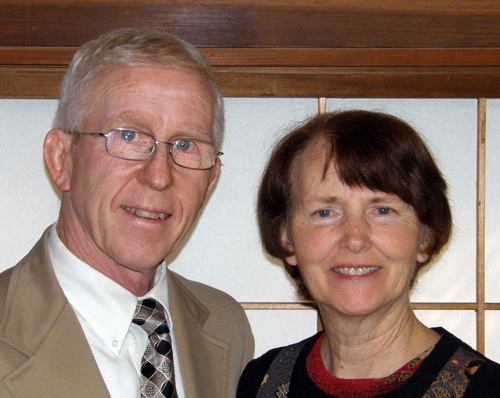 On Wednesday, my sons Caleb and Luke and I drove up to Ishinomaki to contact and volunteer at several shelters, seeking to build ongoing relationships. What an unbelievable scene! I have never seen or imagined such massive destruction. The chaos of the deep seemed to have been vomited up everywhere. It was surreal chaos. A 30 ft. boat with a car in the passenger seat was plowed prow first into a building 15 feet above the ground. Boats in the street and cars in the water. Cars parked in the living room and the washing machine in the field out back. No surreal art gallery will ever surprise me again. Cars were jammed through the principal's office window on the first floor of the refugee shelters. A foot of muck covered the playground of the elementary school. There were no sidewalks, for the streets were lined with debris of the gigantic sort, such as fire engines and trailer trucks. That is reality here. Many parts of Ishinomaki have become a wasteland. The brackish waters have polluted the soil. Houses were swept completely off their foundations. Oh, the destruction. Incredible! This is what I saw 12 days after the earthquake/tsunami, and the Self-Defense forces had been working furiously to restore order. The power of the tsunami is beyond my imagination. It gave me pause to reflect that a tsunami is but a micro byte (or micro-something) compared to the omnipotence of God. It is that same almighty power that God unleashed to make the seas and the skies that he unleashes to save us from our sins. Awesome!

As the sun went down, darkness settled over the chaos. I was able to visit Pastor Shiratsu and his wife and son, who spend the night in the shelter after spending the daylight hours trying to clean up their house which had been flooded with two to three feet of water. They are confined to their room with five other family units in a 20 by 30-foot room. Each has about an eight foot square to sleep in. They are thankful to be alive and do look forward to continue their ministry among the people with whom they are sharing this hardship. "Learning to be content in whatever circumstances" was their testimony. God is with them in the shelter. Do pray for the thousands who are having to live in these difficult conditions. Some shelters are yet without running water or electricity. Pray that the health conditions might not deteriorate. Caleb and I helped get an older man from a stretcher into his niece's car so that he could be out of the shelter and into a more stable condition.

Pray that the brackish waters will be tuned into the sweet fountain of God's grace. Pray that the chaos of the deeps will be quieted by the almighty love of our Lord Jesus, who was willing to be forsaken so that we might not be forsaken. Pray that we will be faithful in these times to be as wise as serpents and as harmless as doves. There are many fragile lives. Our dear little widow friend who lives behind us weeps every time I bring her a loaf of bread or some ingredients for soup. The little ojiisan who lives alone on the street behind us shed tears of thanks as I took him some meat and pickles that had been delivered to us from Tokyo. It was a privilege to share with both of them what we had received. I was also able to share with them of the greater Gift that lasts forever. We all are fragile, even if we do not admit it. Perhaps that is when we are most fragile. Pray for compassionate hearts that will be ready at all time to give an account of the hope that is within us.

We ate chicken ramen heated over a little gas bomb stove in the dark in a parking lot on the outskirts of Ishinomaki. Talk about darkness! We ran into road construction (not literally!) on the way home. Not many cars out. The toll roads are still open only to those who have received special permits as emergency vehicles.

We made it home in time to welcome another of the many after-shocks that continue throughout the day and night. Somehow our house has become a receiving center. A truck from Chiba arrived, unloaded and left. We now have a room full of clothing that we have the privilege of finding a home for. It is not as easy as it sounds, as many are rallying to send supplies and one day there may be a need, so the network responds and the next day they are inundated. I had a call from an unknown woman who came by to pick up some things that had been delivered here without my knowledge. She seemed to have identified what things she needed and left some as a donation. This then led to a conversation concerning the greatest Gift. The needs keep changing each day, so pray for wisdom to perceive and be ready to meet them. Wherever we are or wherever we go, people seem more willing to talk about their weakness and fears. Pray for wisdom. Pray as we work together with our brothers and sisters in the RCJ [Reformed Church in Japan] and other churches here.

To our knowledge all the members in the Reformed Churches of Japan are safe. However, last night I learned six families from one Conservative Baptist church in Shiogama and Tagago have lost their homes. The CB pastor in Kesennuma lost his home and the church. However, he said we are going back. We want to claim Christ for Japan. He quoted from Zechariah 8 and reflected on the power of God to establish his kingdom. Pray for the people to the south of us near the contaminated area. They are becoming the forgotten people. As one of the young pastors that is working with the people in that area said, "It is in the danger zone, but the people without Christ are in an even more dangerous zone. I know where I am going if I die, but there are many in the danger area that need to hear the gospel of Jesus Christ."

Today we delivered the second load of goods from the OPC to individuals in need and churches that are reaching out into their communities in this time of great need. The first team of volunteers from among the RCJ is going to shelters and neighbors to share a cup of cold water in Jesus' name. As the death toll rises, our heart continues to cry out to the Lord to show mercy and grace. We have been devastated. It is our privilege to weep with those who weep and to bring the hope of Christ in the midst of chaos. From out of the depths we cry to you, O Lord. Hear our cry.

And from Craig and Ree Coulbourne, OPC affiliated missionaries laboring with the MTW team in Urayasu, we heard:

Thanks for your prayers for Japan and for the missionaries here. The devastation in the worst hit part of the country is tremendous.

We continue to be OK. We don't have water at the moment (it is expected to be restored by Thursday) and there are planned electrical outages to conserve energy, but all of that seems relatively minor compared to what people in other parts of the country have suffered. Please continue to pray for opportunities to build relationships with our neighbors in the wake of all that has happened.

We were excited to see three non-Christian husbands of church members at Sunday morning worship at Makuhari Church. One said that he came to worship because he felt that perhaps God was saying something to Japan and because he wanted to pray for those who are suffering so much from the earthquake and the tsunami. That's exactly the kind of response we are hoping to see. Please pray that God would open the hearts of many Japanese through these difficult circumstances, and that it would be more than a passing openness that fades when the crisis has passed.

The missionary team in Chiba was able to deliver a truckload of supplies to one of the hard-hit areas. They are working in cooperation with a church in that area, so that the relief is clearly being given in the name of Christ. They hope to make multiple runs to this location, and other Christian groups throughout Japan are seeking to show Christ's love through relief. Pray that such opportunities would speak clearly of God's existence and his love and that the Japanese would have ears to hear.

As you gather with your brothers and sisters in Christ this Lord's Day to worship the living and true God, please ask him, according to his will, to pour out his mercies upon northeastern Japan, and to use this display of his power to soften hearts and draw many to himself, that he might be glorified. Pray, too, for your missionaries, as, during this difficult days, they seek to minister the cup of cold water in Christ's name, together with the Word of life, to those who are suffering.