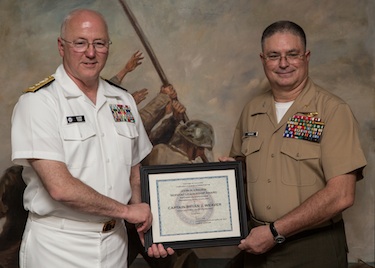 On July 18, Navy Capt. Bryan Weaver, an OP chaplain, was given the prestigious John H. Craven Servant Leadership Award. It was presented to him by Rear Adm. Mark Tidd, chief of chaplains of the U.S. Navy.

The award was named for a chaplain who ministered to sailors and marines during some of the worst battles of World War II, the Korean War, and the Vietnam War. The award is peer nominated, reviewed by a committee, and finally decided by the chief of chaplains.

Weaver, who is affectionately known as “Battle Chaps,” has spent nineteen of his twenty-nine years of service with the Marines. Upon winning the award, he said, “I was stunned. I’m honored and humbled.” His years with the Marine Corps have been spent mostly in the field and in combat zones. He earned the respect of many by being present with them in challenging and dangerous circumstances. “They need to see you,” explained Weaver. “You need to be able to rough it out. I’m not afraid to pick up a shovel, and I’m not changing.”

“I’m just one beggar trying to tell another beggar where to find bread,” he added. “The bread of God.”

Since August, 2013, Weaver has been the command chaplain at the Marine Corps Recruiting Depot at Parris Island, South Carolina. His responsibilities include supervising and mentoring chaplains in the Eastern Recruiting Region.

Captain Weaver has been undergoing medical procedures for malignant brain tumors this year. Please pray for him and his family at this difficult time.