Want to Pastor a Large Church?

The Method to My Madness 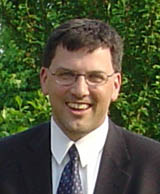 The General Assembly of the Orthodox Presbyterian Church has entrusted its denominational magazine, New Horizons, to the Committee on Christian Education for the purpose of informing OPC members and others about OPC ministries and providing instruction on Christian faith and life that is consistent with the doctrinal standards of our church.

One of my great privileges in serving as general secretary of the CCE is to edit New Horizons. In fulfilling the GA's directive, I draw upon the collective work of my predecessors in this position. In Roger Schmurr, Thomas Tyson, and Larry Wilson, the OPC has been blessed with three exceptionally godly and gifted men to edit New Horizons.

Roger had the monumental task of starting New Horizons from scratch. Ali Knudsen (secretary and proofreader), John Tolsma (graphics), and Susan Schmurr (layout) provided first-rate assistance, and New Horizons was off and running. In reading through the years of Roger's editorship, one sees the work of a brilliant editor, writer, and humorist who had a vision for the future of the OPC.

Under Tom Tyson's leadership, issues would sometimes center on a controversial subject such as theonomy or birth control. Articles pro and con would often be written, and the debate would continue in subsequent issues through letters to the editor. Tom advanced the theological discussion of New Horizons and yet always did so with a pastor's heart. It was early in Tom's tenure that managing editor James Scott was added to the New Horizons staff. Jim's expertise in line editing and layout freed Tom (and Larry and me) to work on the magazine's content and devote attention to the other responsibilities of the general secretary.

As editor, Larry Wilson exhibited theological vigor and an enthusiasm for the Reformed faith. Taking the four membership vows as his starting point, Larry confronted readers with the question, "Are you following Jesus Christ as your prophet, priest, and king?" In pursuing this grand Christocentric agenda, he drew not only from current Orthodox Presbyterians, but also the Reformed giants of the past, such as B. B. Warfield and R. B. Kuiper. From this grid, Larry explored such provocative themes as sexual purity, God's will for my life, and the disembodied gospel.

While the content of New Horizons will remain the same, this anniversary issue does mark stylistic changes. These changes were made with the assistance of OP member Christopher Tobias. I hope that you are as pleased as I am with the look of Chris's redesign.

A silent, but important partner in the publication of New Horizons from its inception has been Harmony Press. We are happy to continue this relationship with Harmony Press under the leadership of Fred and Steve Grotenhuis. From its beginning with OP pastor Lewis Grotenhuis (Fred and Steve's father), Harmony Press has served the OPC faithfully in the production of our educational materials.

Finally, the pages of New Horizons during the past twenty-five years have given evidence of a love for Jesus Christ and that particular expression of the Savior's church that is the OPC. Please pray that, by God's grace, New Horizons will continue to do that. I encourage you to read New Horizons, think about the articles (even the ones that you disagree with!), discuss with others the issues raised, use the prayer calendar, and share the magazine with others.

The author, an OPC minister, is editor of New Horizons. Reprinted from New Horizons, January 2005.

Want to Pastor a Large Church?

The Method to My Madness