Conflict Resolution in the Church, Part 2

Beza on the Trinity, Introduction

Worship in Song: A Biblical Approach to Music and Worship by Scott Aniol

Soon you will see another new face for OPC.org. Once again the Committee on Christian Education’s (CCE) Subcommittee on Internet Ministries (SIM) has managed the redesign of OPC.org with the indispensable help of web designer Chris Tobias and a very competent technical engineer.

In 1995 the OPC initiated its first website (1.0). The minutes of the March 14-15, 1995, meeting of the CCE record the passing of the following motion, “The CCE encourage connectivity by the members of the Committee by December 31, 1995.” According to whois.com, the domain OPC.org was registered on September 20, 1995. Sometime that fall the website was launched. It was remarkably simple, as were most websites of the day, consisting of our name with a series of hyperlinks. The example below is roughly a year after the initial launch.

By 1998 the graphics were slightly improved with an expanded and highlighted introduction. The number of hyperlinks remained the same. 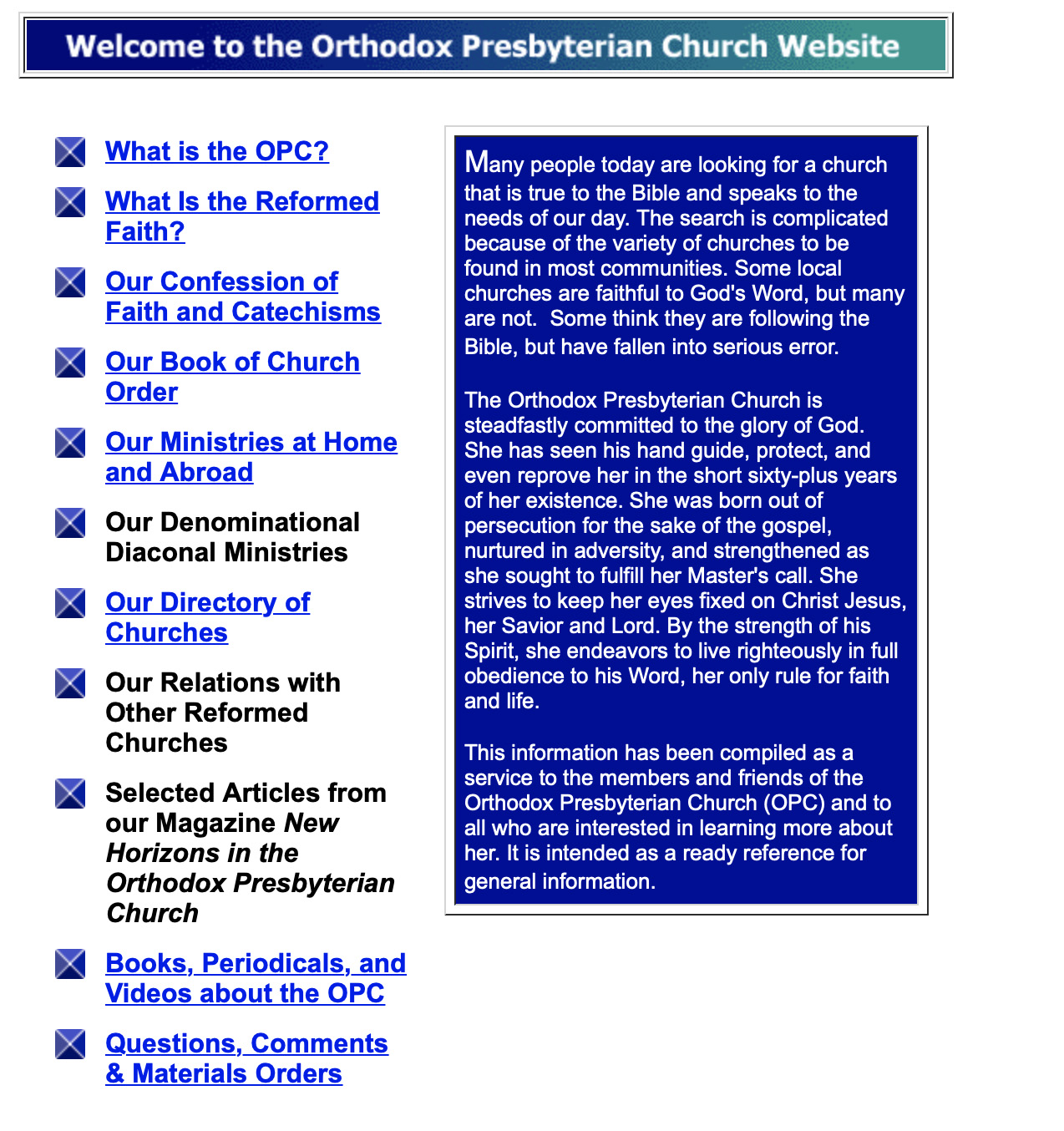 By 2003 a sidebar was added for the hyperlinks, which had been expanded to seventeen. A logo was also designed and added as a banner on the top left.

In 2005 the CCE realized that a more professional design was needed to insure a contemporary web presence, with greater access to the expanding content of the website (2.0). This was a major project. To achieve this goal, web designer Chris Tobias, webmaster Stephen Pribble, technical expert the late Barry Traver, and programmer Jonathan Barlow, were engaged to create a website, meeting the sophisticated standards of the day. While this was during the early days of the introduction of mobile and social media (known as web 2.0), those did not become a pervasive presence until later. The new website (2.0) was launched November 1, 2005. 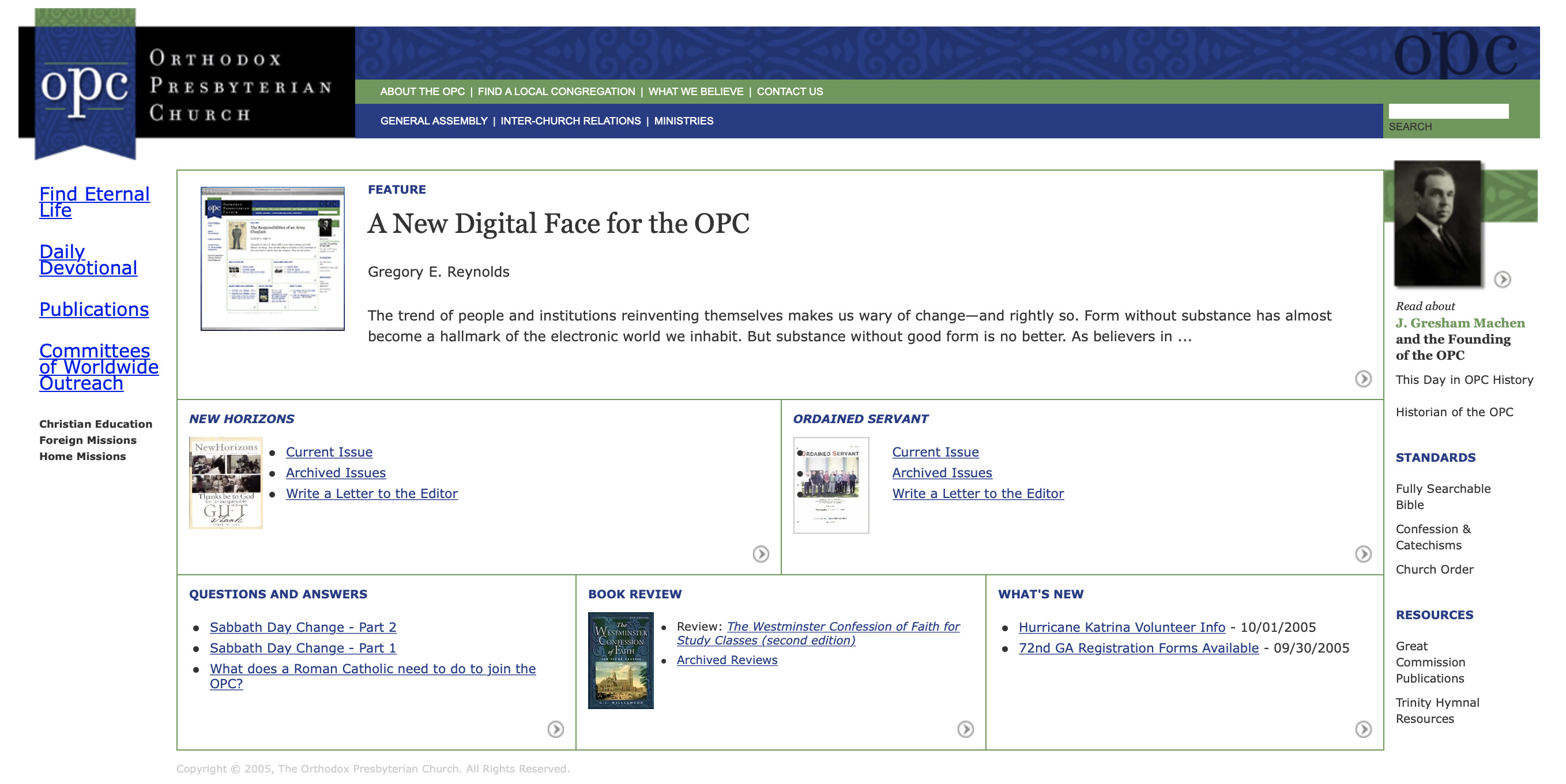 In 2014 the same team updated the website with a more visual aesthetic, making the feature article much more prominent. 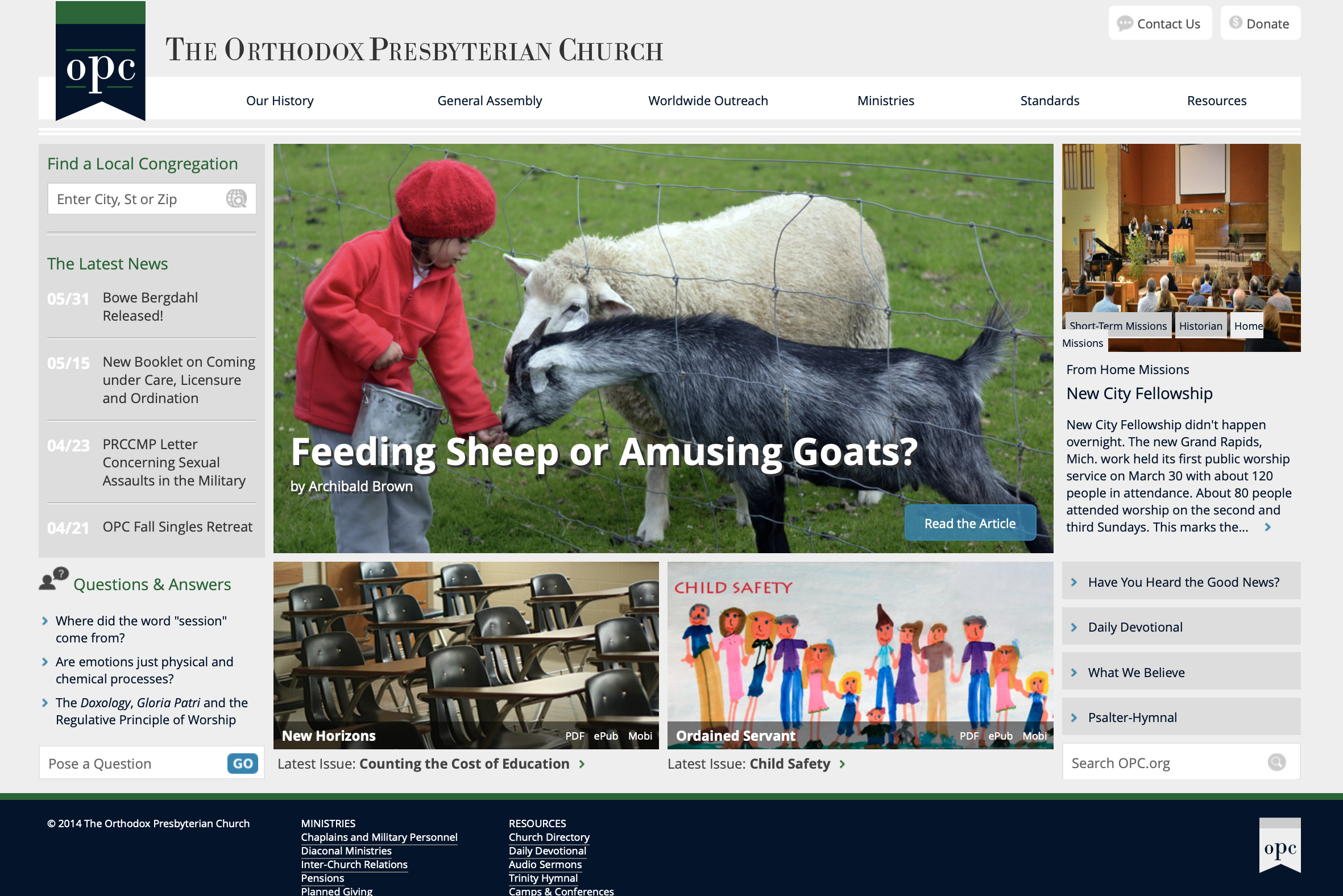 Now in 2019 we have redesigned our website to accommodate the pervasive use of mobile media devices (3.0). Our focus has always been on the dissemination of gospel truth throughout the world. Our content-rich site has not changed its purpose. As I wrote in 2005:

The original mission of OPC.org, as stated in a report to the 1998 General Assembly, has not changed: “The Orthodox Presbyterian Church shall, through its Committee on Christian Education, maintain an official presence on the World Wide Web through its website known as OPC.org, in order to: 1) Provide public information concerning the description, beliefs, structure, ministries, and publications of the OPC; 2) Promote the cause of Christ within the OPC; 3) Provide Reformed theological material for consideration by other Reformed churches around the world; 4) Evangelize and teach the gospel to the world.

I have been part of this project since the 2005 redesign with some trepidation. I think my colleagues on the CCE share this concern as we seek together to be good stewards of the gospel and how it is communicated. This means that we are neither utopian nor dystopian about electronic communication, thus we embrace its benefits and seek to avoid its liabilities.

Such a stance requires a prudential engagement with the electronic environment. And with this new design I would reiterate a stern warning. The internetwork, along with the entire electronic environment, is rearranging the entire structure of Western civilization as did the automobile a century ago. Electronic media subtly alter our thoughtforms, priorities, and relationships to God, his world, his church, and other people in ways that have the potential to undermine the Christian life. Among other things this means that face-to-face relationships may be compromised. As a member of the committee that fields Q&A questions, I have observed a number of people seeking advice that, consciously or unconsciously, does an end run around the leaders of the local church. So, while affirming and enjoying the benefits of the electronic media, we must be vigilant stewards. Among the great benefits of our website is the number of people from other countries, even Saudi Arabia and Iran, hundreds from around the world, who have visited, and in some cases interacted with, OPC.org. May the Lord continue to bless our imperfect efforts.

Here is what you can expect to see soon: 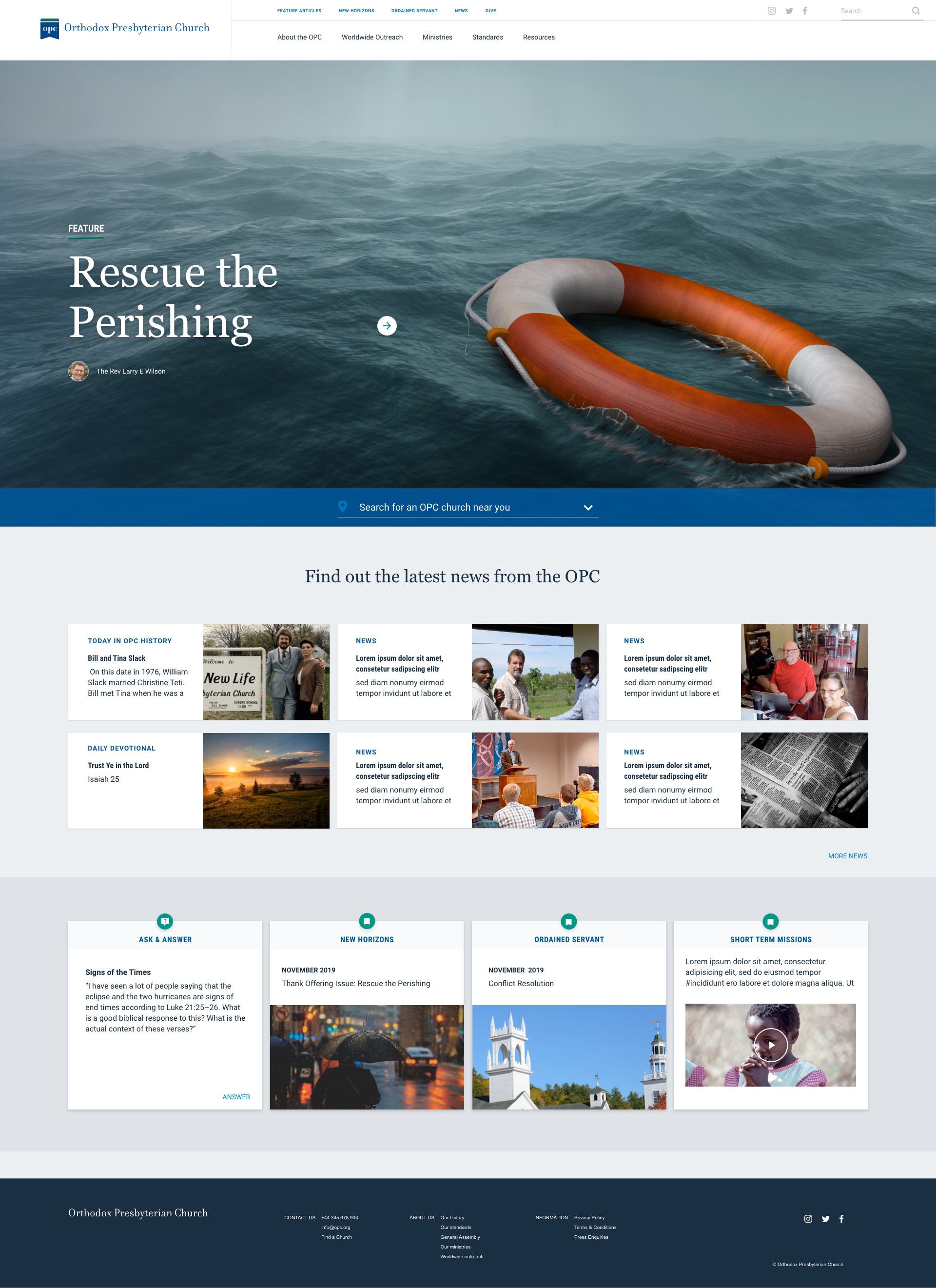 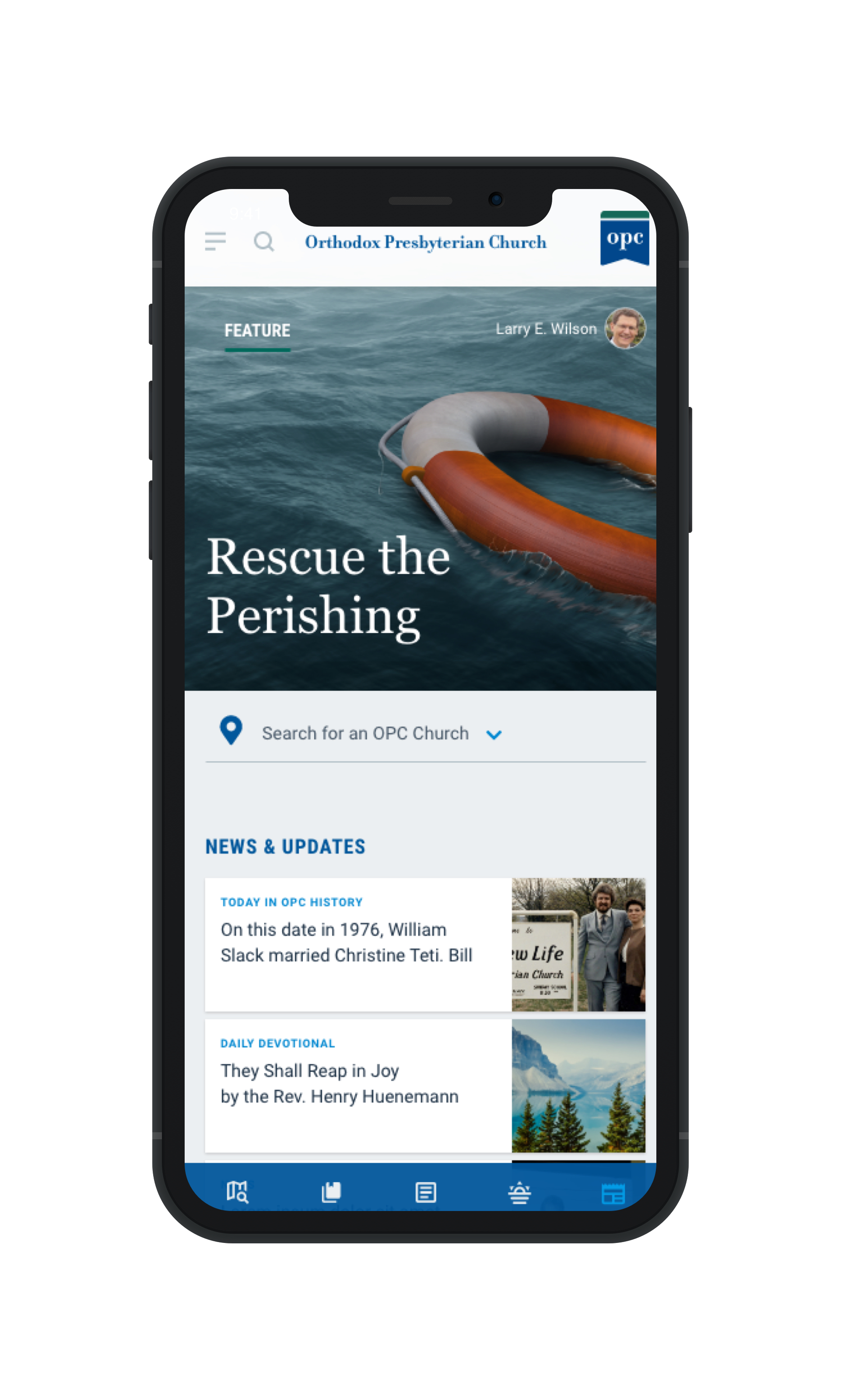 Conflict Resolution in the Church, Part 2

Beza on the Trinity, Introduction

Worship in Song: A Biblical Approach to Music and Worship by Scott Aniol