Far as the Curse is Found: The Covenant Story of Redemption 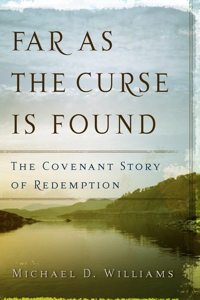 Far as the Curse is Found: The Covenant Story of Redemption

Michael Williams has taught systematic theology at Covenant Theological Seminary for the last ten years. Several words come to mind in characterizing his book: sound, redemptive-historical, mildly Kuyperian, and fresh (but not revolutionary).

An example of freshness can be cited from page 280, where Williams challenges the idea that Matthew 24: 37-41 teaches a dispensational view of rapture by suggesting that the "taking" in verses 40 and 41 parallels the "taking away" (using a different Greek word) in verse 39, which arguably denotes a removal in judgment. While various Reformed scholars are cited in the book, Williams makes sound points without slavish endorsement of old exegesis or new flights of fantasy. This sort of freshness is inviting, even if debate over exegesis continues.

The structure of the book is interesting. It begins with the Resurrection, moves to the Exodus, and then treats creation. Some might wonder at this, since creation is foundational to understanding all of God's subsequent revelation. Yet it is helpful to remember that Christ's resurrection helps make sense of God's work of creation. But why deal with the Exodus before creation? This approach forces the reader to think about the creation story as something first situated in the Mosaic era. Whatever information about creation may have existed prior to Moses, the form in which we have it was probably first known to the children of Israel who came out of Egypt with Moses. Although this perspective can be abused by those who wish to reduce the creation account to a local apologetic, the perspective remains useful for viewing the first chapters of Genesis. A real and relevant sense of ministry comes from viewing Bible narratives this way.

One caveat should be noted. In some scholarly circles, an "Israel-centric" method of viewing biblical data has eclipsed the central Pauline paradigm of two creations or two Adams. One hopes that Williams's perspective will be viewed by readers as merely one of several helpful ways of examining the flow of biblical revelation, rather than the only or main perspective for interpretation.

When it comes to hot-button issues, William uses a footnote to inform us that he rejects "the evolutionary story of biological origins" (p. 64) because it is not in the text and because he does not want to be diverted by modern questions brought to the text. He affirms that the Decalogue is for all men, not just Israel (p. 159). Without debate, he affirms Christ's active obedience (p. 224). He has some discussion on the relation of church and state (beginning on p. 264) that I would describe as mildly Kuyperian.

I commend this book for an advanced Sunday school class, as a text that might be used to stimulate growth among church elders, or as a work to help students prepare for seminary. It might also serve as a supplementary text in seminary courses. While rich, thoughtful, and fresh, it is not cluttered with jargon and does not make the reader feel unduly dependent upon cultural studies and extrabiblical literature to grasp the flow of scriptural teaching.