What Jesus Demands from the World 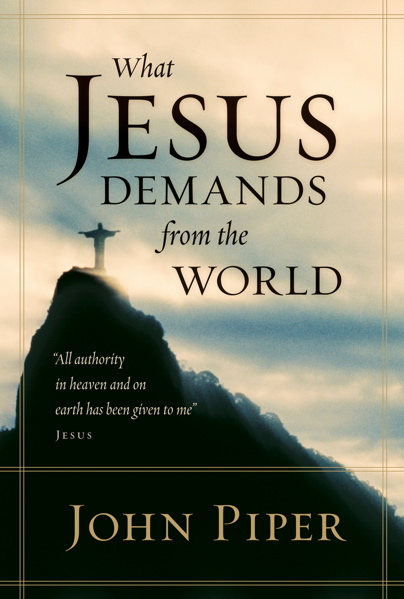 What Jesus Demands from the World

This delightful book is a series of fifty short chapters (called "demands") serving the reader glorious pictures of the Father and the Son from the four Gospels. Piper presents Jesus, not as a harsh personality, but as one who makes godly demands that will bring blessing, redemption, and peace with God and his law. Piper does not talk of Jesus as a taskmaster, but rather as the incarnate Son of God, bringing his heavenly Father's good word. Each chapter begins with two or more gospel texts printed in full, and then Piper expounds them.

The first demand is "You must be born again!" All people are eloquently called to heed the demands of Christ in chapter after chapter: repent, come to me, believe in me, love me, listen to me, abide in me, take up your cross and follow me, love God with all your heart, etc.

John Piper sees the American public as up against secular humanists, who have a Goliath-like disdain for God's kingdom and a foolish confidence that they are invincible. Piper opposes that foolhardy, self-confident army that is out to "eat up" God's people "as they eat bread," while they "do not call upon the Lord" (Ps. 14:4). Piper is like C. S. Lewis, using scholarship to make simple arguments that refute the enemies of orthodox Christianity, all the while growing in his understanding of Jesus Christ.

What Jesus Demands from the World is delightful reading because it presents serious teaching of the blessedness, righteousness, and "peace with God" that Christ's kingdom brings into this fallen world. For those who heed Jesus' teachings, there is a stable and peaceful wisdom that can transform their lives. The book is profitable because it sets forth God's Word, which is the means of grace used by God to transform the saints.

The weakest of the expositions are Demands #45 and #46. In these the author (who is a Baptist minister) says that baptism and the Lord's Supper are merely "ordinances." He teaches that the cup and the bread are symbolic, and he rejects the idea that they are changed in substance—both good stands. But the apostle Paul sees more in Jesus' words; he calls the sacraments signs and seals (Rom. 4:11) of the covenant of grace. Piper calls them commemorations of the inauguration of the new covenant, but he says nothing of renewing one's vows to be the Lord's disciple at the Lord's Table nor of the two sacraments being means of confirming grace. Piper has a high Anabaptist view of the Lord's Supper, but he neglects to draw the apostle Paul's federal theology out of Jesus' words, and he fails to see in Jesus' institution of the Lord's Supper both the memorial of his meritorious death (Matt. 26:28) and the aspect of covenant blessing and curse.

Despite this reservation, Piper's book deserves much praise.