The Piety of John Calvin: A Collection of His Spiritual Prose, Poems, and Hymns 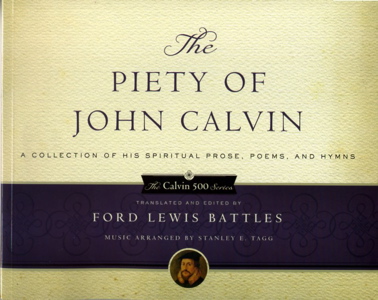 The Piety of John Calvin: A Collection of His Spiritual Prose, Poems, and Hymns

With the passing of July 10, 2009, the five hundredth anniversary of the birth of John Calvin, books about him are rolling off the presses. This one provides a window into the piety and godliness of the great Reformer. Ford Lewis Battles, a great Calvin scholar, was the principal translator and editor of the original volume published by Baker. This new edition by P&R Publishing contains a foreword by David Hall and a preface by Battle's daughter, Nancy Howitt-Battles.

This collection of Calvin's writings aims (1) to present the man Calvin as he saw himself, (2) to explain the Christian life as he understood it, and (3) to examine his views on, and practice of, prayer. Battles accomplishes these goals by including seven carefully chosen selections. Each is accompanied by instructive introductions and terse endnotes for the reader who desires more information.

The book is beautifully organized. From the formatting and arrangement of the text in the book, as well as the carefully constructed words, the reader can gain an appreciation for Calvin's aptitude as a poet and theologian. Indeed, many of the selections demonstrate an almost hymnic quality, on which Battles comments in the notes.

Calvin teaches in these writings that the way to heaven is via the earth; that is, recognizing that this earth is full of dread death and all its consequences, he encourages Christians to look heavenward. Calvin's felicitous thoughts on Christian liberty can be found here. Does God make creation so beautiful that it should be unlawful to enjoy it? Calvin gives no quarter for the Christian who would exploit these truths as a pretext for sin. Additionally, his loathing of human pride before the Most High is a major theme throughout the selections.

The selections are shot through with psychological and spiritual insight into the human condition and psyche. Calvin did not countenance any "cheap grace." He insisted on the highest standards for holiness. Even so, he was a realist—knowing well the pity of his heavenly father—recognizing our feeble frame and offering courageous words for the saint who desires to redouble his or her efforts. "Let us not lose courage even though our progress is but slight. For even though the actuality may not correspond to our desire, when today outstrips yesterday, all is not lost. Only let us look with pure and true simplicity toward our goal."

This reviewer noticed only one spelling error in the book (p. 20). He also wishes that such a book could have been printed on better quality paper. Even so, the publishers are to be commended for producing a handsome book that should grace the coffee tables, nightstands, and private libraries of many Christians. It reveals Calvin's deep inner piety and encourages us to follow in the same path.