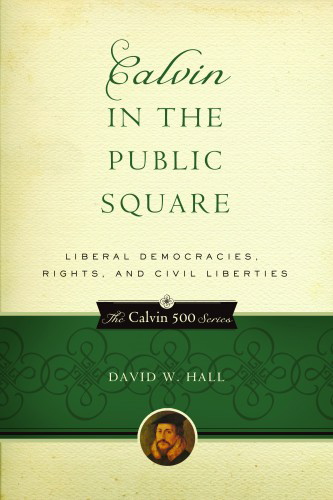 In this book, David Hall discusses the political views of John Calvin and later Calvinists, and argues for their profound impact on subsequent Western political developments.

After an opening chapter on important developments prior to the Reformation, three chapters survey Calvin's life and political views. Hall proceeds to discuss a number of Calvin's sixteenth- and seventeenth-century heirs who embraced and modified his political views and had significant impact on the politics of their own day. Hall then argues at length for the profound influence of Calvinism on the founding of America. He concludes by studying three figures of more recent vintage—Guillaume Groen van Prinsterer, Abraham Kuyper, and Herman Dooyeweerd—who sought to apply Calvinist principles in the Netherlands.

This is a well-written and engaging book. Readers will learn much about how Calvin and many other Reformed figures viewed civil government and political life. There can be little doubt that the ideas of Reformed leaders had a significant impact on Western social life, and Hall's work provides a great deal of evidence connecting Reformed writings to concrete political developments. Furthermore, readers who think of America as an historically Calvinist country will find considerable ammunition for the cause.

With respect to America, it is important to note that this is not an objective examination of the various influences on the establishment of the new nation, but rather a one-sided defense of Calvinism's influence. Other crucial factors, such as the English common law, are mentioned only in passing. This is not a criticism of Hall, since he sets out only to explore Calvinist influence, but readers should not expect more than this.

A few critical comments may be worth mentioning. First, Hall presents a somewhat misleading picture by discussing the Reformed tradition in terms of Calvin and "Calvin's disciples." As some of his own comments indicate, a number of influential Reformed figures preceded or worked contemporaneously with Calvin, and Calvin is not the fountainhead of a "Calvinist" tradition quite in the way Hall often suggests. Second, the book presents too much of a smooth line of inevitable development from Calvin to the political thinking of his theological heirs and eventually to the founding of America. Given Calvin's limited permission of civil rebellion, his wariness about democracy, and his strong advocacy of state support for the true church (and suppression of false religion), the American experiment represents a more momentous shift in "Calvinist" political thought than Hall indicates. Third, Hall presents Calvinist political thinking as a good thing and a model for our present political activity, but provides no clear guidelines for us to discern where previous figures may have gone wrong. Earlier Calvinists did not always agree with each other, were hypocritical at points (e.g., defending religious liberty when they were a persecuted minority, but suppressing others when they had political power), and sometimes promoted spurious biblical exegesis to defend politically expedient actions. Was support of the American revolution necessary for Reformed Christians? On this and other issues, Calvin in the Public Square does not clearly distinguish political convictions that are necessary for Calvinists to hold from those that are disputable matters of prudential judgment.