The Law Is Not of Faith: Essays on Works and Grace in the Mosaic Covenant 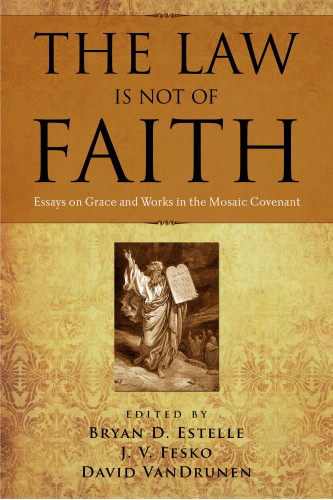 The Law Is Not of Faith: Essays on Works and Grace in the Mosaic Covenant

The Law Is Not of Faith: Essays on Works and Grace in the Mosaic Covenant, edited by Bryan D. Estelle, J. V. Fesko, and David VanDrunen. Published by P&R, 2009. Paperback, 368 pages, list price $24.99. Reviewed by OP pastor Chad E. Bond.

What is the relationship between works and grace under the Mosaic covenant? How do the Mosaic, Adamic, and new covenants relate? Since Orthodox Presbyterians don't all agree on how to answer these questions, it's important to understand our differences—as well as our common confessional ground—from biblical, theological, and historical perspectives. The Law Is Not of Faith is a welcome contribution to the ongoing discussion. It makes a case for the doctrine of "republication," which maintains that "the covenant of works is in some sense republished in the Mosaic covenant at Sinai" (p. 6).

The book contains eleven essays by contributors from three denominations and five academic institutions in the Reformed and Presbyterian tradition. Over half of these contributors are officers in the OPC.

The undeniable strength of this book—its academic orientation—is also its greatest weakness. Except for the engaging and accessible twenty-two-page introduction, the reader must know the biblical languages, as well as a little Latin and plenty of technical theological jargon, in order to follow and weigh the merits of the arguments set forth in the essays. But its technical approach narrows the book's potential readership and could hinder the wider hearing it deserves.

Sadly, this is not a book I could confidently place in the hands of a layman who wants to grapple with the doctrine of republication. Nevertheless, The Law Is Not of Faith makes an intellectually rigorous and compelling defense of its thesis. Therefore, those who can read it ought to read it. Even those who reject this particular construction of covenant theology can still benefit from working through the historical, biblical, and theological arguments. It's not likely that the doctrine of republication is going to vanish from the OPC anytime soon. But hopefully some of the common misunderstandings and unwarranted suspicions surrounding it will dissipate, thanks in part to this book.

I was surprised at some of the questions not addressed in The Law Is Not of Faith. For example, the essays shed little or no light on how Christians should interpret the New Testaments texts that indicate some measure of continuity with the Mosaic covenant in terms of covenant conditionality, the third use of the moral law, and even the threat of temporal judgments for a believer's disobedience. Also, for the sake of balance, I would have liked to see more attention given to pertinent passages in the Gospels, the General Epistles, and Revelation (this volume restricts its New Testament focus primarily to passages in Romans and Galatians).

We cannot expect one book to treat all the relevant issues exhaustively. But The Law Is Not of Faith does advance the discussion and set the tone for further reflection on these important issues for the doctrine and life of the church.