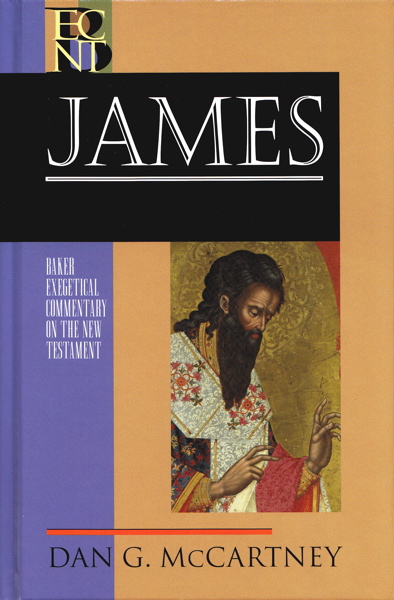 The Baker Exegetical Commentary series seeks to provide commentaries that are both scholarly and readable, from an evangelical perspective. Dan McCartney's commentary on James is a fine example of this, for it is clear and easy to comprehend without sacrificing solid exegetical scholarship.

It is easy to find one's way through the commentary. Each chapter begins with a brief outline, followed by an overview of the chapter in a gray box. Each subsection is clearly marked. The commentary is well written, making it easy to follow.

Yet, while the commentary is designed to be accessible, it does not sacrifice scholarship. The first seventy-four pages are devoted to introductory materials, including detailed discussions of authorship, audience, structure, and genre. Throughout the main body of the commentary, there are clear discussions of the Greek text, which this reviewer found helpful. The commentary uses both footnotes and endnotes to give more technical information without bogging down the flow of the discussion in the main section. As an added bonus, there are four excurses at the end of the commentary: "Faith as the Central Concern of James," "Faith, Works, and Justification in James and Paul," "James and Wisdom," and "James and Suffering." Each one is rich, helpful, and stimulating.

There are several outstanding features worth highlighting. First, McCartney shows that James and Paul are not contradicting each other when they speak of justification by works. When Paul condemns justification by works, he is condemning the idea that a sinner can gain God's favor by good works. When James declares that a person is justified by works, he is attacking "false faith," condemning the idea that one can have genuine, saving faith without good works resulting as fruit from that faith. In other words, James and Paul address different problems when talking about justification by works. McCartney also argues persuasively that James's concern for genuine faith unites the various discussions of the book.

A second outstanding feature is McCartney's sensitivity to the function of eschatology in James. He shows that faith must always have its gaze on the end, the final goal, the consummation of the kingdom of Jesus Christ.

A third feature is the emphasis on wisdom. James is clearly seen to be influenced by wisdom literature, and he has a great concern for wisdom. McCartney shows us that for James, biblical wisdom is a matter of being heavenly-minded, of living today by faith in light of the hope to come.

In summary, this reviewer warmly commends McCartney's commentary on James as a useful tool that is at once scholarly, accessible, and, above all else, faithful.