Calvin and Commerce: The Transforming Power of
Calvinism in Market Economics 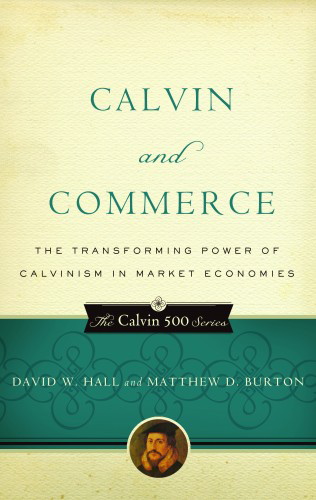 Calvin and Commerce: The Transforming Power of
Calvinism in Market Economics

Max Weber published The Protestant Ethic and the Spirit of Capitalism in 1905, setting forth the erroneous thesis that, for Calvinists, a person must be one of the elect if he is wealthy. Hall and Burton are better students of Calvin.

Wherever Calvinism has spread, free market capitalism has arisen. This phenomenon began in Geneva itself, which was "transformed … into a … bustling forum for economic development" (p. 26).

The question naturally arises: what did Calvin teach on economics? This volume answers the question, providing a "primer" on his economic theory (p. ix). His economic teaching is based on his theology, which in turn comes from Scripture.

Five economic tenets appear in the book. They might be called "the five points of economic Calvinism." Calvin's positions put him at odds with the medieval theologians. Calvin would also not fit into the categories of political and economic liberalism, socialism, or Marxism.

First, Calvin stressed that work is a moral duty. God condemns "all indolent repose" (p. 23). Loafing around and depending upon government handouts are sinful.

The second point of economic Calvinism was revolutionary. Medieval theologians "condemned lending at interest" (p. 75). Calvin was "the first theologian" to remove "the veto" of the church on this practice (p. xv). Charging interest on a loan, he maintained, is necessary for there to be equity (p. 75). Calvin thus built the engine that led to economic prosperity in countries that embraced the Reformed faith.

Calvin taught, thirdly, that private property is legitimate. "Let him who possesses a field hand it down to posterity as he received it, or even better cultivated" (p. 23). Men who deny such a right, he said, are "destitute of their wits" (p. 69). Calvin would have had little respect for Karl Marx, who advocated "the abolition of private property" in Das Kapital (p. 12).

In the fourth place, Calvin argued that "wealth is given by God" (p. 7) and that "unequal levels of wealth are part of the providence of God" (p. 154). There is no support in Scripture for the socialist agenda of a "radical economic equality" (p. 78). Calvin would have opposed the modern idea of redistributing wealth through a heavy, graduated income tax.

Calvinism in the fifth place stresses charity. Wealth is good because it provides an opportunity to minister to the needs of others. Liberalism assumes that the "government is the institution best suited to lead poverty-relief efforts" (p. 146). Calvin dissented. "The hierarchy of relief" in the biblical model (1 Tim. 5:4) starts with the family (p. 144) and then moves to the church. Social welfare in Geneva was the responsibility of the deacons (cf. Acts 6:1, 3). "External bureaucratic methods of relief should be made available only as the last resort" (p. 144).

Hall and Burton have produced a helpful entry into the economic thought of the foundational theologian of the Reformed theological tradition. Calvin and Commerce is a good resource on the fundamental biblical perspectives on economics.