Republocrat: Confessions of a Liberal Conservative 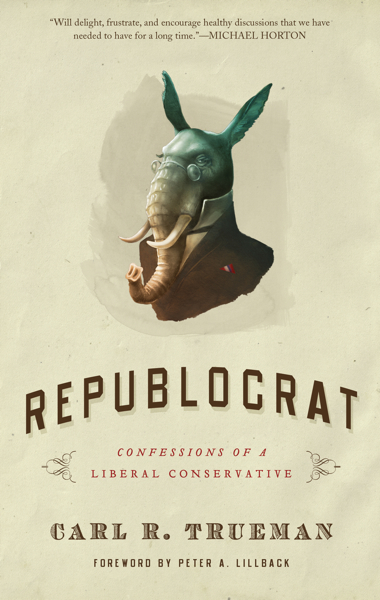 Republocrat: Confessions of a Liberal Conservative

Carl Trueman, professor of historical theology and church history at Westminster Theological Seminary in Philadelphia, opposes abortion and gay marriage, but supports gun control and nationalized healthcare. This makes him a "Republocrat." His thesis is that "conservative Christianity does not require conservative politics or conservative cultural agendas" (p. xix). His concern is that the current connection between Christians and the Republican Party unnecessarily alienates young people from the church (pp. xx, 109).

In the first of his six chapters, "Left Behind," Trueman explains that "the Left has lost its way" (p. 1). Whereas the old Left was concerned with the material issues of poverty, sanitation, housing, unemployment, and hunger, the new Left is concerned with psychological issues of special interest, middle-class lobbies.

Chapter 2, "The Slipperiness of Secularization," suggests that Christianity thrives in America in contrast to Europe because in America the church embraces the secular pursuits of prosperity, consumerism, individualism, nationalism, and the cult of personality. Europeans pursue the same things, but without the religious dress.

Chapter 4, "Living Life to the Max," warns against "the idolatry of assuming that the capitalist way is God's way in any absolute sense" (p. 78) by highlighting the good and bad consequences of capitalism.

Chapter 5, "Rulers of the Queen's Navee," observes that the nature of American public discourse (being visual, aesthetic, and narrative dominant), together with the political reality of a two-party system, requires an oversimplification of complicated political issues.

Chapter 6, "Concluding Unpolitical Postscript," briefly discusses a remainder of issues. Most politicians become centrists once they are elected. Christians need realistic, not utopian, political expectations. Should abortion be a watershed issue? Politics is deeply pragmatic on all levels. To what degree can the church parse political issues?

Trueman is British, which gives him the perspective of a political outsider. But he is also an OP minister, giving him the voice of an ecclesiastical and theological insider. This gives him a measure of objectivity that is well reflected in the book. Most Christian books about politics are written for the sake of the nation: what can we as Christians do to bring America back to her roots? Trueman's chief concern, however, is for the church: what can we do to save the church from America? His answer is to stop letting politicians, secular aims, media personalities, and cultural idioms define us.

Generally, Trueman is echoing a message that scholars like Os Guinness, Mark Noll, and David Wells have been communicating for years—that we are not critical thinkers, but should be. I am too pessimistic to think anything will ever change very much. Most of us are pretty distracted. But if the lights ever come on, such an event will be attended by reflection on good books like this one.