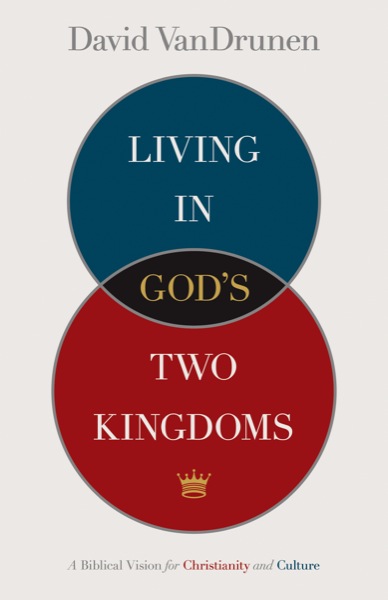 This useful response to the fashionable transformationist movement affords the contemporary Christian a full-orbed, biblical view of Christianity and contemporary culture. The book is divided into three parts, with the third one offering fine, practical conclusions.

Part 1 lays the theological groundwork for VanDrunen's case and anchors it in a comparison and contrast of the first and the last Adam, creation and redemption, respectively. Part 2 presents the reader with a similar pattern of comparison and contrast with respect to the Old Testament community of faith and the New Testament church. The thesis is nuanced, distinguishing between three stages of the Old Testament era, namely, the patriarchal age, the time of Israel's possession of Canaan, and the period of exile. While the first and last of these three periods saw God's people as "strangers and sojourners" in the world (or rather, a foreign land), and therefore as citizens of two very different kingdoms, it was only under the Mosaic covenant and during the centuries of Israel's occupation of the Promised Land that the Old Testament church lived in suspension of the cultural provisions of what VanDrunen calls "the common kingdom."

The book is at its best in the balanced conclusions of Part 3, which draws together and applies the theological principles that crystallize in the preceding chapters and demonstrate how they are relevant for Christian living in the present age and culture. VanDrunen's plea for our liberty not to be bound by the all-too-often rather unthoughtful penchant of many conservative Christians for a certain political persuasion stuffed with stock-in-trade clichés is worthy of full marks. His discussion of what constitutes genuinely Christian values is equally to the point, and affords a helpful response to those whose concepts of "Christian mathematics" or "Christian science" are no more helpful or enlightening than some notion of "Christian snorkeling."

Although Living in God's Two Kingdoms is an excellent treatise, a few questions may occur to the attentive reader. One concerns terminology. VanDrunen distinguishes between "the common kingdom of God" and "the redemptive kingdom of God." However, when the New Testament speaks of this world as a kingdom or domain, it is invariably opposed to the kingdom of God (see especially Matt. 12:25–29). On the other hand, "the kingdom of God" is always a kingdom not of this world. This world is Satan's kingdom until the time when "the kingdom of the world has become the kingdom of our Lord and of his Christ" (Rev. 11:15). Thus, the terminology of two kingdoms of God, one common and another redemptive, seems somewhat ill conceived in light of the book's claim to be a "biblical vision for Christianity and culture."

Finally, although the language of man's "cultural mandate" is time-honored and popular enough in Reformed circles, it seems better to speak of a "cultic mandate," since Adam's holy calling was to promote the glory of God throughout the world, with Eden being the nucleus of the cosmic temple. This task certainly entails cultural aspects, but they are subsidiary to the greater cause.