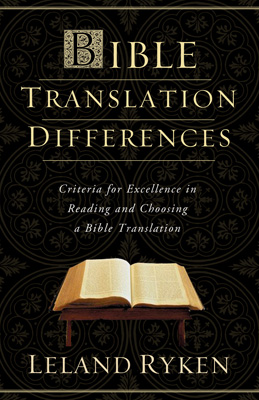 The last time I went to a Christian bookstore, it made me weep. First, there weren't many books. Worse, as I browsed what few books there were, I couldn't help but overhear a discussion between a customer and a clerk. The customer wanted to buy a Bible; she was confused by all the translations. I was appalled at the ignorance of the clerk in trying to explain the differences - the blind was leading the blind. This very concern prompted Leland Ryken, professor of English at Wheaton College, to write the pamphlet Bible Translation Differences. "If I am right," he says, "few laypeople know what really makes various English Bible translations different from each other" (p. 5).

Ryken introduces the competing principles of Bible translation that have influenced modern translations. Until the middle of the twentieth century, Bible translators aimed to translate the Hebrew and Greek words of the Bible. But then a new philosophy came to the fore: "dynamic equivalence" or "functional equivalence." Instead of aiming for an "essentially literal" (word-for-word) translation, this new approach aimed to give a thought-for-thought translation. Instead of communicating the words of a text, dynamic equivalent translations seek to communicate the meaning of a text. Essentially literal translations include the King James Version, the New American Standard Bible, the New King James Version, and the English Standard Version. Translations that follow the philosophy of dynamic equivalence (but not equally aggressively) include the New International Version, the New Living Translation, the Contemporary English Version, and the Good News Bible.

After explaining these competing approaches, Ryken describes five negative effects of dynamic equivalence. Ironically, rather than making the Scriptures easier to understand, dynamic equivalent translations put distance between the readers and the Scriptures, obscuring the words of Scripture with the translators' interpretations. Then he spells out ten reasons why we can trust essentially literal translations. This is a powerful list. One reason to translate on a word-for-word basis is that God inspired the very words, not just the thoughts, of the Bible. This includes their figures of speech. It also includes their difficulties.

Throughout the book, Ryken gives examples from different versions. When one compares the essentially literal translations, one finds that they say the same thing in different words. But it's striking how much the dynamic equivalent translations differ from one another. Ryken said he frequently had to double-check to make sure that he was looking at the same verse! This has had the deleterious effects of multiplying versions and reducing people's confidence that they can understand the Bible. It's hard to know what the Bible means if you're not sure what it really says.