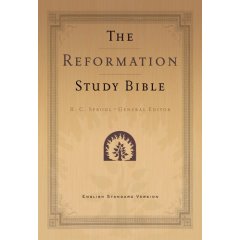 Study Bibles have become popular resources for Bible students today. They are also dangerous tools. In fact, some pastors have urged their flock not to use them. A stern caution about study Bibles is found in R. C. Sproul's book Knowing Scripture. It is all too easy, Sproul notes, for users to confuse the Word of God with the words of a commentator. "Because the comments appear on the same page as Scripture, [a study Bible] tends to 'baptize' these remarks in the minds of readers" (p. 116).

It may appear odd, therefore, that Sproul's Ligonier Ministries has now produced a study Bible of its own. The recently released Reformation Study Bible joins a flooded market of competitors, including the New Geneva Study Bible (Thomas Nelson, 1995) and the Spirit of the Reformation Study Bible (Zondervan, 2003). It contains the standard features found in those two study Bibles, including the same study notes, sidebars on theological subjects, and a concordance. What distinguishes Ligonier's offering is its use of the English Standard Version, a new translation that is earning praise for its reliability and readability. The ESV (see New Horizons, October 2002) possesses the many virtues of the original Revised Standard Version, without its liberal bias. It has also resisted the current trend to convert the Word of God into gender-inclusive language. The union of a Reformed commentary to an accurate and contemporary English translation renders the Reformation Study Bible a worthwhile investment, even for those who own another study Bible with the same notes.

While this volume does not include the confessions and catechisms of the Spirit of the Reformation Study Bible, this may be a case where less is better. The book-of-confessions appearance of that appendix, along with the confusion of alternate versions of the Westminster standards, may have the unintended effect of eroding confessional literacy and confidence among its users.

But what about the aforementioned danger of study Bibles? Sproul's concern, it seems, lies mainly with the use of a study Bible while sitting under the preaching of the Word. In this setting, the exegesis of the commentator threatens to usurp the authority of the preacher. We can benefit from this helpful resource and still heed Sproul's warning if we use the Reformation Study Bible in our study and keep it there.