The Intolerance of Tolerance 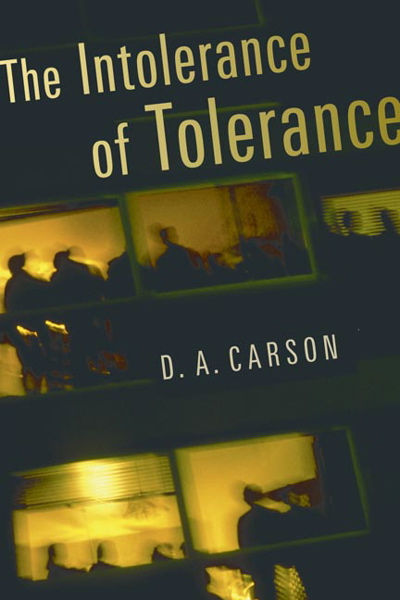 The Intolerance of Tolerance

The Intolerance of Tolerance, by D. A. Carson. Published by Eerdmans, 2012. Hardback, 256 pages, list price $24.00. Reviewed by Joel Pearce, an academic librarian and member of the URCNA. (Page numbers refer to the advanced proof copy.)

"Tolerance" has taken on golden calf status, being the predominant ideology in most areas of life. In his recent book, The Intolerance of Tolerance, D. A. Carson tackles this ideology, arguing that it is not tolerance at all.

Carson argues that tolerance no longer means what it used to. At best it is veiled intolerance, and at worst it is tyrannical. The old tolerance, by contrast, acknowledges the existence of right and wrong and discoverable, defensible truth. This tolerance accepts "that a different or opposing position exists and deserves the right to exist" (p. 3). This tolerance respectfully engages in debates and criticisms.

The new tolerance is tolerant of all things on the surface, so long as no dogmatic, absolute, or judgmental remarks are made. This new tolerance has become part of the unquestioned plausibility structure, and it accepts (almost) all opinions and renders them equal. But under this view of tolerance, right and wrong cease to have meaning. It does not acknowledge specific truth, and rejects as intolerant any system of thought that claims to have the truth. Thus, any disagreement is demonized as intolerant, leaving no room for anything but a spineless, tyrannical tolerance. The irony, not lost in the book's title, is that the new tolerance is actually vehemently intolerant of anything that isn't tolerant of the new tolerance: "No absolutism is permitted, except for the absolute prohibition of absolutism" (p. 13).

Of course, tolerance is not just an abstract concept, but the dominant thinking of the West, which is not to our credit:

Cultures in other parts of the world often see in Western (new) tolerance not a mature and civilized culture worth emulating, but a childish and manipulative culture that refuses to engage with serious moral issues.… Far from bringing peace, the new tolerance is progressively becoming more intolerant, fostering moral myopia, proving unable to engage in serious and competent discussions about truth. (p. 139)

Well researched and engagingly written, this book provides many examples of this new tolerance's influence in society, including religion, politics, academics, and the news media. But Carson isn't a paranoid alarmist merely decrying the loss of the modern age or the takeover of secular humanism. Instead, he firmly engages with popular and academic sources, building his case that the old tolerance is necessary for a truly free society, while the new tolerance spirals into inconsistency and ultimately tyranny. The final chapter offers ten practical reflections, which are helpful (if brief). The only blemish this reviewer found is Carson's digression on democracy, with his meandering reflections on the separation of church and state. This fault is most likely with the reviewer, however.

The Intolerance of Tolerance is intellectually stimulating without being stuffy or overly academic. Carson is a gifted writer with deep insight. This work is attuned to mixed audiences of academics and the public, Christians and skeptics. It is recommended for each of these audiences.