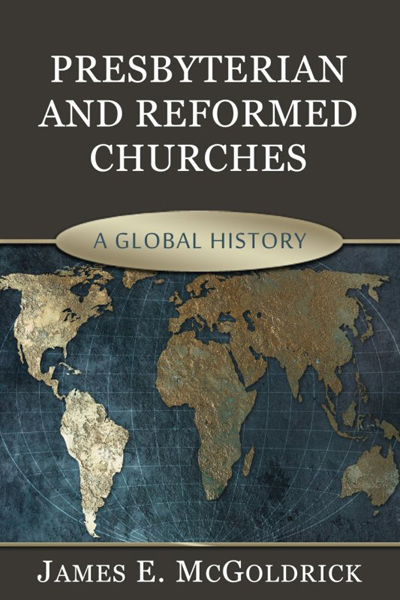 Professor James McGoldrick, of Greenville Presbyterian Theological Seminary, has served our Presbyterian and Reformed community well in the production of this volume. Presbyterian and Reformed Churches provides a helpful tool for anyone interested in, or involved with, the ecumenical calling of the church. It is a work on church history, to be sure, but the breadth of the survey, and the historical details recounted, provide the ecumenist (mindful of the prayer of our Lord Jesus, "that they may all be one") with a sweeping handbook of Reformed Christianity.

I say "production" because, as McGoldrick himself acknowledges, he is deeply indebted to Richard Clark Reed, late church historian at Columbia Theological Seminary, and the unpublished manuscript of Thomas Hugh Spence, onetime director of the Presbyterian Historical Foundation in Montreat, North Carolina. Reed's History of the Presbyterian Churches of the World was published by Westminster Press in 1905. Spence's unpublished manuscript covers much of the same ground as Reed. McGoldrick has used both works.

While McGoldrick has acknowledged Reed and Spence as coauthors, one should not minimize his own excellent contributions to the volume. The portion on the twentieth century is his, as well as the suggested reading list at the end of each chapter. The book is chronological and geographical in its scope. Beginning with the ancient church and the extinction of Presbyterianism, the narrative moves to the Reformation in Europe and then unfolds the spread, development, and distinctives of the Reformed and Presbyterian churches worldwide.

The present reviewer was favorably reminded of the style of Kenneth Scott Latourtette's magisterial History of Christianity. That being said, surveys are naturally selective, and limitations of space and material forbid being exhaustive. Still, McGoldrick manages to put his finger on much that is central in each church. However, one may question what might be seen as an overemphasis on the author's own denomination (the Presbyterian Church in America). Our own Orthodox Presbyterian Church receives notice, as well as our sister churches in North America and around the world. If for no other reason, this will prove helpful for readers interested to find out about the personnel, history, and character of other churches with whom the OPC has fraternal relations.

There are at least several minor mistakes. On page 283, the Reformed Churches of New Zealand are said to be associated with the defunct Reformed Ecumenical Council. The RCNZ left that body along with the OPC in the late 1980s. On page 288, the RCNZ are said to have initiated a missionary work in Taiwan. It would be more accurate to say that the OPC initiated that work and that the RCNZ accepted the invitation of the OPC to participate.

These are minor matters, which illustrate the encyclopedic range of information that McGoldrick has successfully drawn together in Presbyterian and Reformed Churches.