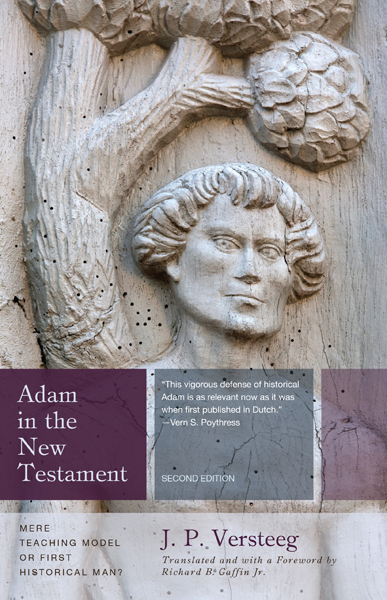 A comparison of Romans 14–15 with Galatians reveals that we need to distinguish between beliefs that are fundamental to the Christian religion and beliefs that are not. An example of the former is the historicity of Adam, which is the subject of J. P. Versteeg's Adam in the New Testament: Mere Teaching Model or First Historical Man?

This short book was originally a contribution to a volume published for the seventy-fifth anniversary of the Theological Seminary of the Christian Reformed Churches in the Netherlands over forty years ago. An English translation by Richard B. Gaffin, Jr., first appeared in 1978. This new edition remains substantially the same, except that it has a new title and includes a lengthy foreword by the translator.

Adam in the New Testament addresses the view that the New Testament does not present Adam as a historical figure, but as "an illustration, an explanation of the reality of Jesus as Messiah" (p. 4). In this sense, Adam serves as a "teaching model." The biblical doctrine of Adam teaches us about the person and work of Jesus, not the history of humanity. Versteeg critiques this view in a number of ways.

First, he examines the New Testament passages pertaining to Adam. The most important one is Romans 5:12–21, and Versteeg devotes an entire chapter to it. He also considers Luke 3:38, 1 Corinthians 15:22, 45, 1 Timothy 2:13–14, and Jude 14. In each case, the author demonstrates the bankruptcy of the "teaching model" interpretation.

Second, the author examines the rabbinic references to Adam. He does this in order to refute the argument that the Jewish rabbis referred to Adam merely as a teaching model and that the New Testament should be interpreted in light of their understanding.

Third, Versteeg argues that if it was Paul's intention to view Adam as a historical figure, then we cannot say that Adam is merely a teaching model without denying the significance of Paul's treatment of Adam for us today. Similarly, we cannot deny Paul's historical view of Christ's resurrection without denying the significance that Paul saw in that event.

Finally, Versteeg helpfully lays out the consequences of denying the historicity of Adam. In so doing, he establishes that this doctrine is a fundamental one. Richard Gaffin takes up the same theme in his foreword and applies it to a recent book by Peter Enns. These two sections, along with the chapter on Romans 5, make this book well worth reading, especially by ministers and elders. The historicity of Adam is once again under attack, and one aspect of the argument is that it is not a fundamental doctrine. In others words, people are saying that the gospel is not at stake in the denial of the historicity of Adam. This book will show you otherwise. Highly recommended.