From Heaven He Came and Sought Her: Definite Atonement
in Historical, Biblical, Theological, and Pastoral Perspective 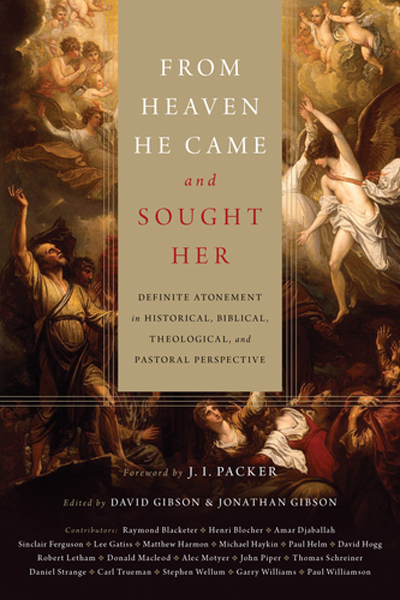 From Heaven He Came and Sought Her: Definite Atonement
in Historical, Biblical, Theological, and Pastoral Perspective

This book is an important contribution to the defense of the Augustinian and Reformed doctrine of definite atonement. The historical essays cover a wide range of the doctrine's history. Haykin and Hogg deal with the ancient and medieval treatment of the doctrine; the latter discusses Gottschalk of Orbais, who provided the most advanced and stimulating pre-Reformation Augustinian views. Helm brings a philosopher-theologian's precision to his helpful analysis of Calvin, while Blacketer's well-researched piece refutes common attempts to drive a sharp wedge between Calvin and Theodore Beza. Gatiss provides a thorough examination of the British delegation's involvement at the Synod of Dordt and the theological diversity of the delegates. Djaballah provides a synopsis of Amyraut's Brief Treatise on predestination, although he does not mention Lum's 1985 translation of this work. Trueman helpfully addresses aspects of Owen's seminal discussion of this doctrine.

This book is especially valuable for its exegetical contributions (Williamson, Motyer, Harmon, J. Gibson, and Schreiner). Taken together, they firmly root the idea of definite atonement in the unfolding, seamless fabric of the history of revelation. The theological essays (MacLeod, Letham, Williams, Wellum, and Blocher) show how the doctrine of definite atonement plays a key role in shaping the overall biblical system of doctrine. The book fittingly concludes with three essays (by Strange, Ferguson, and Piper) on the pastoral significance of the Atonement.

It should be no surprise that a book of this size might provoke a few critical observations. First, the book's criticism of the adjective "limited" is at times a little overdrawn (p. 122). Several seventeenth- and eighteenth-century Reformed theologians connected "limited" to "atonement" and "satisfaction." Whatever theological or rhetorical objections might be leveled against this term, one cannot argue that it was not part of the older debates.

Second, the essays are inconsistent in their presentation of hypothetical universalism in relation to the Reformed confessions. Some accurately position it as a form of inconsistent Calvinism. Both J. Gibson and Letham provide an able critique of various versions of the doctrine and its potential compromise of orthodox Christology and Trinitarianism (pp. 368–69, 440–44). Others, like Gatiss and Blacketer (following Richard Muller), position it squarely (albeit somewhat uncomfortably) within the Reformed confessional tradition. Letham goes so far as to say that the views of the English hypothetical universalists at the Westminster Assembly "were not seen as posing a major threat to the sovereign particularism of the decrees nor to the nature or intent of the atonement" (p. 439). This was certainly not the view of Edward Reynolds, the chairman of the committee that drafted the chapter on the decree. Upon hearing Calamy articulate his position, Reynolds responded: "This opinion cannot be asserted by any that can say he is not of the Remonstrants' position" (Minutes, Sess. 522). It was also not the view of George Gillespie, who saw Calamy's hypothetical universalism as an implicit compromise of absolute reprobation: "I cannot understand how there can be such a universal love of God as is maintained. Those that will say it must needs deny the absolute reprobation" (ibid.). These brief quotations should raise some doubt as to whether hypothetical universalism was "viewed as a threat" to sovereign particularism or the nature of the atonement.

This debate mirrors the one between Warfield and Briggs at the turn of the twentieth century, and it reappeared in a different form in the debate over which version of the Westminster Standards the OPC would adopt in its infancy. In our own denomination, figures like John Murray and Cornelius Van Til were self-conscious heirs of the Old Princeton tradition, defending a strictly particularist understanding of the faith of the church.

A careful study of this book will certainly aid us in continuing that important work. The weaknesses noted above should not detract from the overall helpful analysis it provides of this important doctrine. Definite atonement is certainly not the whole substance of Calvinism. But it is an integral part of the Reformed faith as it is confessed, taught, believed, and lived to the glory of our triune God.