Revelation: Let the One Who Is Thirsty Come 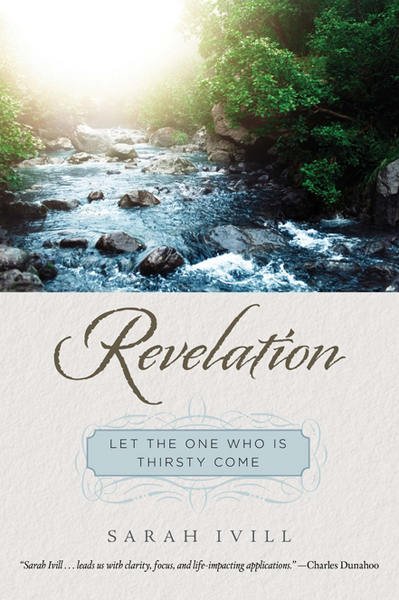 Revelation: Let the One Who Is Thirsty Come

Who doesn't want to know about the future? What Christian thinks he has the book of Revelation all figured out? The last book of Scripture can be so enigmatic that Christians shy away from it. But Sarah Ivill has mined good Reformed commentaries to produce a worthwhile Bible study for women. It is both theological and practical.

The book covers the text of Revelation in twenty-one lessons of about the same length. The introduction helpfully outlines the structure, symbolism, and theology of Revelation. A list of questions at the back of the book is intended for use with each portion of Scripture. These questions concentrate on prayer, observation of facts, interpretation within the context of the whole of Scripture, and application for learning and living. Each chapter builds around these categories. Particularly helpful are the extensive notes about the Old Testament background. One appendix addresses the three views of the millennium with a table of Bible verses. Another appendix compares the Trinity with the counterfeit trinity.

While alternate views receive some mention, the traditional Reformed perspective of covenant and Christology remain central. For example, the twenty-four elders represent the church from both the Old and New Testament, and yet are also actual individuals. Also, the 144,000 are understood as the entire church, but space is given to explain the literalist view as well. Not everyone will agree with every interpretation presented in this book, yet each reader will interact with a well-reasoned, biblically based, Reformed interpretation.

The chronological format and the interspersed personal stories that accompany each chapter invite the reader into a more approachable study. For those who want a deeper study, there are questions with research "homework" preceding each chapter analysis. The accompanying charts clarify many points. These, along with the normal set of questions, make the book suitable for group discussion. It is also devotionally inspiring for individual study. For example, concerning the scroll with seven seals, she comments, "No matter our strength … it pales in comparison to what is needed to unfold the sovereign decree of God and open the way for judgment and salvation before us. Without someone greater than the angelic beings and ourselves we are hopeless to satisfy God's demand for holiness, righteousness, and justice before him" (p. 68). Also, the book is not encumbered by scholarly discussions of critical apparatus and translation, as might be addressed in Revelation 22:18–19. Yet, concerning this verse, the book counters a common Arminian misinterpretation with a single sentence.

This is a Bible study book that edifies the mature and stabilizes the young, especially through the continual references to parallel passages. Mrs. Ivill often explains how various passages apply to one's mind, heart, and hands, so that the reader is not left with knowledge alone. Rather, a challenge to live in the light of God's Word enhances this accessible study of Revelation for groups as well as individuals.