Fools Rush In Where Monkeys Fear to Tread: Taking Aim at Everyone 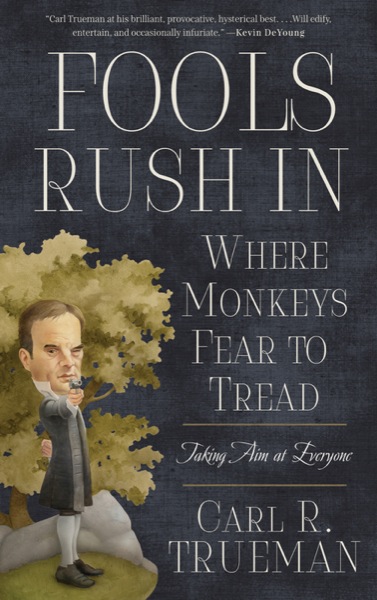 Fools Rush In Where Monkeys Fear to Tread: Taking Aim at Everyone

This book by Carl Trueman, in spite of its laborious title and unflattering cover, is a laugh-a-minute dissection of American politics, church, and pop culture. The author is professor of church history at Westminster Seminary, Philadelphia, and pastor of Cornerstone OPC in Ambler, Pennsylvania. His quick wit and native British sensibilities give him a unique insight into the American scene not found in many other contemporary authors.

This book is the third in a series of published blog posts written for the website Reformation 21, and it has all of the benefits and drawbacks of such a collection. It has the feel of being written for the Web, as it consists of disconnected, short musings on narrow topics. As a result, I would recommend taking it in small doses.

Trueman’s favorite topics to critique include Christian celebrities, adolescent spirituality, the misuse of the Internet, and the irony of self-promotion. Along the way, he quotes surprising sources to support his insights: Kierkegaard, The Who, Sigmund Freud, and Karl Marx. He advocates controversial positions, including the virtues of laziness, middle age, and wasting time. Trueman argues that drinking beer with friends reforms the church, admits that normal church life is boring, and asserts that, despite what you may think, you aren’t special! Trueman attacks Facebook as juvenile and makes a case for why we shouldn’t care when we “hurt” people’s feelings.

Part of the appeal of the book is that it is filled with humor. British colloquialisms and antiquated cultural references pepper every page (there’s even a glossary in the back!).

But the book isn’t all humor and wit—it is written with a pastor’s heart. The real meat of the book is the biblical insights that are set in contrast to all of the fluff and sin that pervade our lives. Trueman also shows the importance of an historical awareness for understanding the present. Too often movements and individuals are overhyped and given more credit or blame than they deserve. I appreciate Trueman’s emphasis on how the Lord normally grows his church—not through big conferences and high-flying preachers, but by little people plodding away in unheard-of parts of the world. For me, one of the most valuable aspects of the book is the inclusion of a series of chapters on Roman Catholicism, presenting the most balanced criticism and appreciation of it that I have ever read.

I find it refreshing that Trueman doesn’t pull any punches in his criticisms. He attacks head-on the big phenomena that all of us get sucked into: the American penchant for pragmatism, “mega-everything,” and style over substance. Trueman has been dubbed “the anti-celebrity celebrity” because of his willingness to criticize movements of which he is also a part. After all, he is famous himself. It is left to the reader to decide whether this is possible. Can he successfully pull off a critique of American cults of personality without creating one himself?