From Age to Age: The Unfolding of Biblical Eschatology 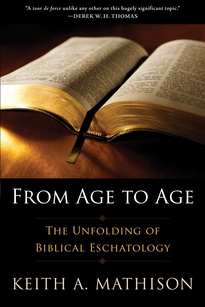 From Age to Age: The Unfolding of Biblical Eschatology

P&R Publishing has recently released this title in a quality paperback edition, and it would serve as a handy and helpful one-volume companion for any who may be engaged in a Bible overview study or instructional setting.

Mathison's approach fits comfortably within the "acorn to oak tree" model of God's unfolding revelation in Scripture, as he writes out of a studied commitment to the principle that there is both unity and development in the story line of redemption. The author persuasively demonstrates how glimmers of the full-grown oak tree can be traced on each leaf and branch in all phases of the growth of the kingdom of God (cf. Luke 13:19). Thus, the term "eschatology" in the title refers not simply to the "last things" associated with Jesus' second coming, but also to Christ's first-advent fulfillment of what came prior to him in the prophetic word: "Eschatology does include a study of the consummation of God's purposes at the end of history, but it also includes a study of the stages in the unfolding of these purposes" (p. 2).

Mathison supplies his own summary of the texts for each section of Scripture—especially those that narrate formative events and turning points—and then relates how each part of the Word prepares for (OT) or confirms (NT) redemptive realities that have taken place in "the fullness of time." I found here a thoughtful and accessible mix of linguistic analysis, historical explanation, and reasoned theological interpretation. Throughout his work, Mathison interacts with the contributions of other writers, while never straying far from the main trail of the biblical text.

His treatment of Genesis as a stage-setting book is valuable, and his explication of the remainder of the Pentateuch captures well the covenantal dynamic at work. In the pages devoted to the Psalms and the Wisdom literature (whose eschatological shaping have arguably been underappreciated), the reader will find many suggestive and edifying gleanings.

The chapters on the Prophets (treated in chronological order) are full of substance and insight. Mathison maintains that Adam's exile from the garden of Eden in Genesis 3 foreshadows Israel's banishment from the land of Canaan (p. 27). He goes on to explain that within the framework of the old covenant, "exile was the ultimate judgment because it was, in effect, a death sentence for Israel" (p. 152). In this context, the prophetic images and descriptions of restoration are ripe with resurrection significance.

The remaining half of Age to Age continues into the New Testament books with the same solid exposition. Mathison expands on many of the kingdom themes found in the first portion, now concentrated on the arrival of Christ the King, who "comes clothed in the garments of the gospel," as some of our forefathers have so memorably said.

It is encouraging to see within the wider Christian community a keen interest in grasping the overarching narrative of the Bible, as indicated by the publication of several big-picture presentations and summaries of Scripture. For those who are seeking to delve more deeply and gain a clearer sense of the lines that connect as well as distinguish various dispensations of the covenant of grace, Age to Age is a good place to turn. It underscores that Scripture is indeed "written down for our instruction, on whom the end of the ages has come" (1 Cor. 10:11).